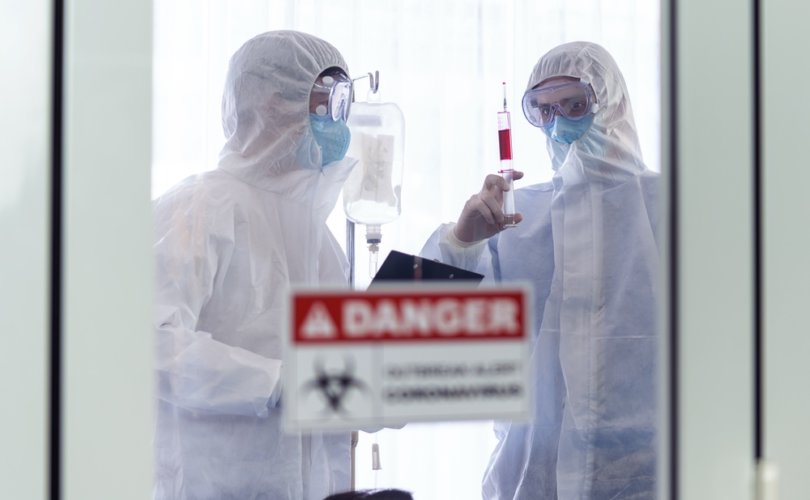 New York Gov. Andrew Cuomo announced that “66 percent of the people” recently hospitalized for the coronavirus “were at home, which is shocking to us.”

“They're not working; they're not traveling,” he said. “We were thinking that maybe we were going to find a higher percent of essential employees who were getting sick because they were going to work — that these may be nurses, doctors, transit workers. That's not the case. They were predominantly at home.”

May 8, 2020, 8:49 a.m. EST: A group of pastors and a state legislator wrote to Virginia Gov. Ralph Northam on April 30 that some churches in the commonwealth will open up on May 3 and May 10, regardless of his executive orders.

The New York Daily News reported yesterday, “A ghoulish Staten Island nurse swiped a credit card from a dying coronavirus patient in a hospital ventilator unit, using the pilfered plastic to callously purchase groceries and gas as he wasted away, authorities charged Thursday.”

An off-duty police officer in Birmingham, Alabama, who was moonlighting as a Walmart security guard, body-slammed a woman for not wearing a facemask. Video of the violent altercation can be viewed HERE.

President Trump’s new press secretary Kayleigh McEnany shut down media by turning a question back to them and reading a list of their various inaccurate headlines on the coronavirus.

Asked if our story about a valet testing positive will have any effect on what's going on inside the West Wing, like staff wearing masks, Kellyanne Conway says in part, “I think if anybody should start wearing masks and showing more respect, it should be the media.”

May 7, 2020 (LifeSiteNews) – Honolulu, Hawaii, is cracking down on its homeless population, despite the fact that the city’s shelters “had a 96% occupancy rate in December 2019,” the Honolulu Civil Beat reported. “The situation is especially dire now because shelters have reduced their capacities to allow for more social distancing during the COVID-19 pandemic. Experts are also predicting a spike in homelessness as unemployment skyrockets and people find themselves unable to pay rent.”

People who had and then recovered from the coronavirus are banned from entering the military, the Pentagon confirmed to Military Times.

A medical researcher said to be on the “verge of making very significant” coronavirus findings was found shot to death over the weekend in Pennsylvania, officials said.

Bing Liu, 37, a researcher for the University of Pittsburgh School of Medicine, was found dead Saturday inside a home in Ross Township, north of Pittsburgh, the Allegheny County Medical Examiner said.

He had been shot in the head and neck, the agency said.

An hour after Liu's body was discovered, a second person, Hao Gu, 46, was found dead inside a car less than a mile away, the agency said.

Noting the Empire State’s $13 billion deficit, Gov. Cuomo said healthcare workers who volunteered to come to New York during the pandemic will have to pay state taxes.

4,575 Canadians have been fined or ticketed for alleged coronavirus-related infractions, to the tune of almost $6 million.

Ten people in Argentina were arrested for going to Mass.

The Texas Supreme Court has ordered the release of Shelley Luther, the salon owner who was jailed and fined $7,000 for keeping her business open during the state’s lockdown. Luther said she and her stylists needed to be able to feed their families.