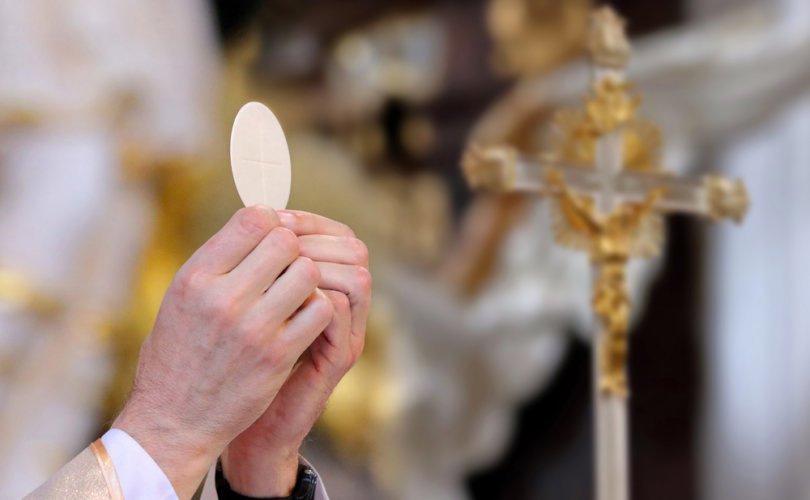 June 1, 2021 (LifeSiteNews) — The U.S. bishops conference (USCCB) will go ahead with its plan to discuss “Eucharistic Consistency” at its meeting this month — despite a group of 67 bishops (three of them cardinals) pressing in a letter for the matter to be taken off the agenda.

USCCB president Archbishop Jose Gomez stated in a May 22 letter addressed to all U.S. bishops that a proposed “document on the Eucharist” will be discussed at the June 16-18 virtual General Assembly.

“As you will note, the focus of this proposed teaching document is on how best to help people to understand the beauty and mystery of the Eucharist as the center of their Christian lives,” the Los Angeles Archbishop wrote in the letter.

Gomez said that any vote at the upcoming meeting will not be to approve a final statement, but “only whether drafting of a text may begin.”

“If approved, the Doctrine Committee will develop a text. From there, the Conference’s usual process of consultation, modification, and amendment will take place as the document is presented for consideration at a future Plenary Assembly,” the letter states.

The letter comes in the wake of a group of 67 bishops writing to Gomez on May 13, asking that discussion on the matter of reception of Holy Communion be taken off the agenda for the upcoming meeting. The letter originated from the Archdiocese of Washington headed by Cardinal Wilton Gregory. Gregory stated last November that he would not “veer” from the path of allowing President Biden to continue receiving Communion, as Biden did when he was vice president. The initiative was principally organized by Gregory and Cardinal Blase Cupich of Chicago, reported The Pillar. Joining Cardinals Gregory and Cupich in signing the letter was Cardinal Sean O’Malley of Boston. Cardinal Timothy Dolan of New York had also signed the letter, but withdrew his name after the letter had been sent.

“Having now received the May 7, 2021 letter from His Eminence Luis F. Cardinal Ladaria, SJ, Prefect of the Congregation for the Doctrine of the Faith, we respectfully urge that all Conference wide discussion and committee work on the topic of Eucharistic worthiness and other issues raised by the Holy See be postponed until the full body of bishops is able to meet in person,” the group of bishops state in their letter.

The letter was referring to a May 7 letter from the Congregation for the Doctrine of the Faith to Archbishop Gomez, advising that any forthcoming policy on giving Holy Communion to pro-abortion politicians who call themselves Catholic, such as President Joe Biden, may become a “source of discord” for the country’s episcopate and would unfairly target “only one category of Catholics.” While the CDF’s letter will likely slow down the bishops in addressing the problem, it did, nevertheless, provide a rough outline for how the bishops could address the problem, involving “two stages” of dialogue before taking concrete steps to “witness to the grave moral responsibility of Catholic public officials to protect human life at all stages.”

Ladaria’s letter also called for a “true consensus of the bishops on the matter” prior to any concrete steps being taken.

The letter from the 67 bishops stated that the “high standard of consensus among ourselves and of maintaining unity with the Holy See and the Universal Church as set forth by Cardinal Ladaria is far from being achieved in the present moment.”

“Moreover, as the Prefect’s sound theological and pastoral advice opens a new path for moving forward, we should take this opportunity to re-envision the best collegial structure for achieving that,” the letter added.

“I’m really alarmed at this move. We are following our conference procedures. I’m very bothered by [this letter],” he told The Pillar in a May 26 interview.

“The administrative committee voted overwhelmingly to put this on the agenda for the June meeting,” he said. “I know Archbishop Gomez is committed to following the procedures as we agreed on them. I think this is totally unacceptable.”

Cordileone said that some bishops signed the letter without realizing what it was about and later withdrew their support for it.

“I know two bishops and I’ve heard there are others, who agreed to sign it and then later realized exactly what this was about and are upset, and have withdrawn support,” he said.

Cordileone also suggested that many of the signers of the letter are auxiliary bishops who don’t have any say when it comes to policy matters at the USCCB.

“I know they say they have [around] 70 bishops who signed, but many of those bishops are auxiliaries in the dioceses of the main protagonists of this letter,” he said.

In a May 1 Pastoral Letter that sent shockwaves around the U.S. episcopacy, Archbishop Cordileone stated that Catholic politicians who “reject the teaching of the Church on the sanctity of human life and those who do not seek to live in accordance with that teaching should not receive the Eucharist.”

“It is fundamentally a question of integrity: to receive the Blessed Sacrament in the Catholic liturgy is to espouse publicly the faith and moral teachings of the Catholic Church, and to desire to live accordingly,” he wrote. “If you find that you are unwilling or unable to abandon your advocacy for abortion, you should not come forward to receive Holy Communion. To publicly affirm the Catholic faith while at the same time publicly rejecting one of its most fundamental teachings is simply dishonest.”

The matter of applying Catholic teaching when it comes to Holy Communion for politicians who claim to be Catholic while championing the deaths of pre-born babies through abortion has acted as a dividing line for the U.S. bishops. Some say that such a ban would amount to a “weaponization” or “politicization” of the Eucharist. Many more point out, however, that such a ban is required by Church teaching, and is necessary to protect the sacrament, to avoid scandalizing the faithful, and to call the sinner to repentance.

The Catholic Church holds that the bread and wine consecrated by a priest at Mass become the body, blood, soul, and divinity of Jesus Christ, the Second Person of the Holy Trinity. St. Paul warns the Corinthians that those who partake of the Holy Eucharist in an “unworthy manner” will be “guilty of profaning the body and blood of the Lord.”

The Catholic Church teaches (Code of Canon Law, can. 915) that Catholics who are “obstinately persevering in manifest grave sin are not to be admitted to holy communion.” According to a 2004 memo issued to the U.S. bishops by Cardinal Joseph Ratzinger, the former prefect of the Congregation for the Doctrine of the Faith who is now Pope Emeritus Benedict XVI, a Catholic politician who is “consistently campaigning and voting for permissive abortion and euthanasia laws” manifests “formal cooperation” with grave sin and must be “denied” the Eucharist.

Archbishop Gomez, in his May 22 letter to all U.S. bishops, attached a draft of a proposed document by the USCCB Committee on Doctrine on the topic of “Eucharistic consistency within the wider context of Church teaching on the Mystery of the Eucharist.”

“In light of recent surveys, it is clear that there is a lack of understanding among many Catholics about the nature and meaning of the Eucharist. This teaching document will address the fundamental doctrines concerning the Eucharist that the Church, as a whole, needs to retrieve and revive,” the committee’s proposal to draft a formal statement on the matter reads.

“This includes the call to all the faithful for ongoing conversion, moral transformation, and missionary discipleship,” it adds.

The proposed draft lays out a plan for addressing the matter that includes three parts. The first part deals with “real presence,” “Sacrifice,” and “Healing.” The second part deals with “Unity,” “Beauty,” and “Identity.” The third part deals with Moral transformation, “Eucharistic Consistency,” and “Missionary Discipleship.”

Regarding Eucharistic Consistency, the proposed draft states: “A person should examine himself, and so eat the bread and drink the cup. For anyone who eats and drinks without discerning the body, eats and drinks judgment on himself (1 Cor 11:28-29).” It adds the following note: “The nature of eucharistic communion and the problem of serious sin.”