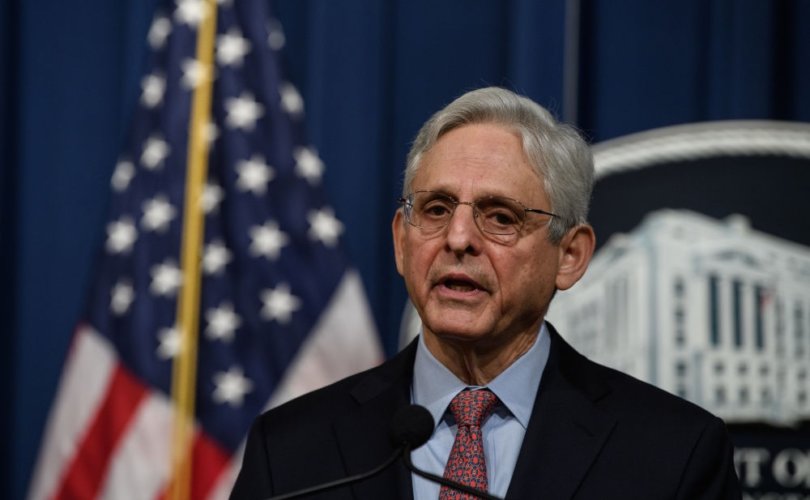 WASHINGTON, D.C. (LifeSiteNews) — Dozens of Republican lawmakers signed on to a letter Friday calling for Attorney General Merrick Garland to direct the Department of Justice and the FBI to investigate the deaths of the five nearly full-term aborted babies found in Washington, D.C. late last month.

The move came as pro-life groups last week rallied outside the Washington, D.C. medical examiner’s office — where the bodies of the murdered babies are being held — demanding a full investigation into the infants’ deaths.

In the April 8 letter, 23 senators and 46 representatives said they “are gravely concerned by allegations brought forward that suggest a preborn baby underwent a partial-birth abortion at the Washington Surgi-Clinic in Washington, D.C.”

“We demand that you conduct a comprehensive investigation on the circumstances surrounding the deaths of each preborn baby,” they wrote.

The letter was led by U.S. Sen. Mike Lee of Utah and Rep. Chris Smith of New Jersey, and co-signed by a bevy of Republican lawmakers including Sens. Ted Cruz of Texas, Josh Hawley of Missouri, Mitt Romney of Utah, Reps. Marjorie Tayor Greene of Georgia, and Lauren Boebert of Colorado, among dozens of others.

I sent a letter with 68 colleagues asking @TheJusticeDept to investigate the deaths of unborn babies whose remains were found in DC.

Partial-birth abortion is an evil, heinous crime. If these babies were killed unlawfully, we must find the perpetrators. https://t.co/3GIynd0Pkj

The lawmakers noted that in addition to passing the Partial-Birth Abortion Ban Act of 2003, Congress declared that “a moral, medical, and ethical consensus exists that the practice of performing a partial-birth abortion” is “a gruesome and inhumane procedure that is never medically necessary and should be prohibited.”

The GOP senators and congressmen cited the expertise of neonatologist Dr. Kendra Kolb, who told Live Action News on April 1 that the baby girl in question was likely “somewhere between 28-30 weeks’ gestational age, with evidence of deep lacerations to the posterior neck, which presumably correlates to the method of abortion used to end her life.”

The letter noted that to date, the Metropolitan Police of D.C. have declared that the babies’ deaths were the result of lawful abortions. Officials have stated that they will not pursue autopsies of the infants.

“However, we question whether such a conclusion can be reasonably reached regarding the cause of death for each preborn baby until an official autopsy is performed,” the Republican legislators said. “We formally request that you direct the appropriate personnel at the Department of Justice and the Federal Bureau of Investigation (FBI) to investigate whether these preborn babies were aborted in violation of federal law, specifically the Partial-Birth Abortion Ban Act of 2003.”

“We also request the Department of Justice ensure the preservation of each of these bodies as evidence for future investigations,” they added.

The letter’s authors further argued that “justice demands that at the very least, an investigation be conducted to ensure that anyone conducting these illegal, abhorrent acts against the most innocent among us may be prosecuted.”

The senators and congressmen concluded by expressing their expectation that the U.S. Attorney General “will provide written confirmation to the undersigned that you and the appropriate personnel of the Department of Justice and the FBI will either fulfill, or not fulfill, these requests by no later than Monday, April 11.”

To date, no response has been publicly made by Garland’s office. LifeSite has reached out to the Attorney General’s office for comment but has yet to hear back.

Meanwhile, this isn’t the first time Republican lawmakers have called for an investigation into the deaths of the babies.

Rep. Greene had also called for Washington, D.C. officials to launch an investigation in an April 5 video posted to social media.

The bodies of the five nearly full-term infants were reportedly recovered by pro-life activists Lauren Handy and Terrisa Bukovinac on March 25 outside the Washington Surgi-Clinic, a downtown abortion facility run by abortionist Cesare Santangelo.

RELATED: Abortionist of retrieved late-term babies once admitted he would leave born-alive children to die

Handy and Bukovinac told LifeSite in an interview last week that they obtained a box containing the bodies from an anonymous truck driver who was allegedly loading boxes from the abortion facility to transport them to the Curtis Bay Medical Waste Services incineration facility.

The pro-lifers then brought the aborted babies back to Handy’s apartment in order to give them a “proper burial” and funeral. The infants’ remains were subsequently seized by officials after the FBI raided Handy’s home and arrested her on charges connected with a “traditional rescue” she conducted with eight other pro-lifers in October 2020.

Curtis Bay Medical Waste Services has denied claims it transports or incinerates the remains of unborn babies amid shocking allegations from pro-lifers that the company, which operates a “Waste-to-Energy” program, burns the bodies of aborted babies as “medical waste” used to generate electricity for the city.

By the way, an abortion clinic in DC is dismembering and butchering fully developed infants and sending their bodies to Baltimore to be burned for fuel

Last week, the company edited language from its website that stated it “utilizes Waste-to-Energy incineration to safely convert infectious/biomedical waste and non-hazardous pharmaceuticals into useful energy.”

In an interview with LifeSiteNews’ John-Henry Westen, Handy said that recovering the babies’ bodies from medical waste boxes was the “most soul-crushing experience” she’s ever undergone.

Handy and eight other pro-life activists were arrested March 30 and charged by the FBI for leading a “traditional rescue” at Washington Surgi-Clinic in October 2020. Handy and the others are now facing up to 11 years in prison, three years of supervised release, and $350,000 each in fines.