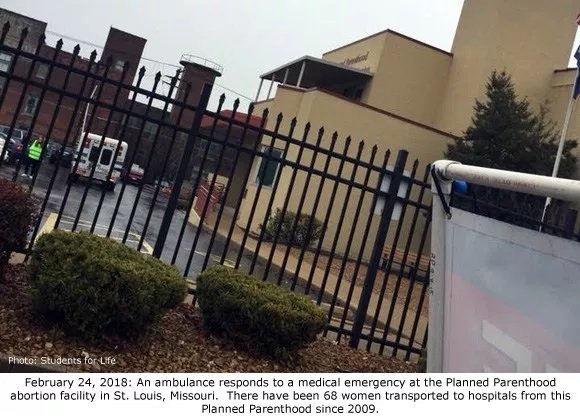 But that day, as a group of young pro-life activists from a Students for Life group prayed on the sidewalk outside the abortion facility, an ambulance arrived and transported a Planned Parenthood patient to the hospital.

What was so significant about this ambulance sighting was that it represents the sixty-eighth time an ambulance has transported a patient from this abortion facility since mid-2009. This makes the RHS Planned Parenthood among the worst in the nation for abortion patient safety.

According to the activists on the scene, the ambulance arrived and left without the use of lights and sirens – an observation that may be significant. Last year the Missouri legislature passed a new law that makes it a crime for an abortion facility employee to request that an ambulance run without lights and sirens because silent running actually delays the arrival of emergency help.

Whether that was the case during the Saturday incident remains unknown since 911 audio recordings, which are public in most places, are blocked from release to the public by the St. Louis Fire Department.

This incident comes as the City of St. Louis is attempting to pass an ordinance that would create a buffer zone around the facility. This would make meaningful communication with abortion-bound women nearly impossible for pro-life activists.

Last year, the City of St. Louis declared itself a “sanctuary city for abortion,” an action meant to destroy pro-life pregnancy centers by forcing them to hire pro-abortion activists and refer women for abortions under threat of prosecution or other legal action.

While the Constitutionality of that “sanctuary” ordinance is being challenged in court, the City Council is taking their pro-abortion bias a step further with the proposed buffer zone law in an attempt to silence those who offer help to women outside of Planned Parenthood.

The most recent medical emergency only highlights the need for pro-life activists outside the Planned Parenthood to offer practical assistance to abortion-bound women. It is the last opportunity to reach out to these women and help them avoid the needless deaths of their pre-born babies, and perhaps escape serious injury for themselves.

Historically, most abortion facility buffer zone laws do not hold up in court because they violate the First Amendment rights speakers and their audiences, but challenges can take years and be very costly. It is better for these unjust laws never to be enacted.

“The City of St Louis has made it clear that pro-life speech is not welcome in that city. Now they want to make sure effective, life-saving pro-life speech isn't allowed there by making it a criminal act,” said Troy Newman, President of Operation Rescue. “Silencing speech is not the American way. It is the way of totalitarians who want to lock down any ideas that they don't like. In this case, silencing pro-life speech means the death of more babies. It must be opposed and exposed.”

A vote is expected on the St. Louis buffer zone ordinance on Friday, March 2, 2018.