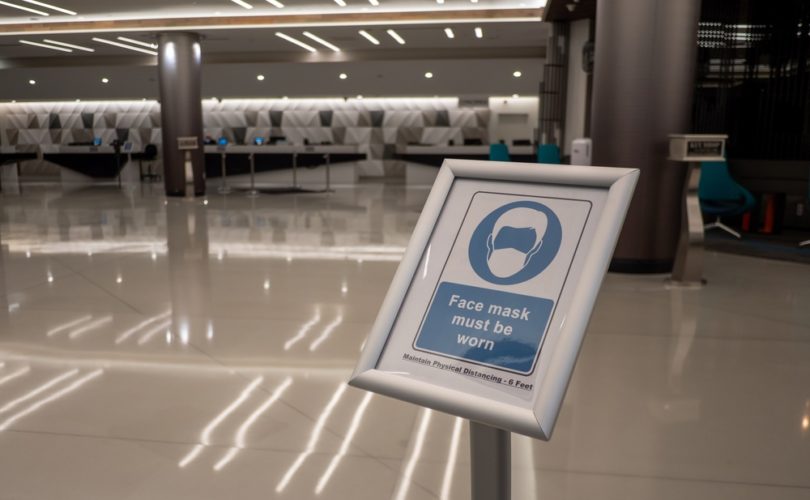 WASHINGTON, D.C. (LifeSiteNews) – The U.S. Senate voted 57-40 on Tuesday to express formal disapproval of the Biden administration’s continued mandate to wear masks on planes and public transportation, with several Democrats crossing the aisle and only one Republican declining to condemn the policy.

Citing the recommendation of the Centers for Disease Control & Prevention (CDC), the Transportation Security Administration (TSA) said last week that it “will extend the security directive for mask use on public transportation and transportation hubs for one month, through April 18th,” while “work[ing] with government agencies to help inform a revised policy framework for when, and under what circumstances, masks should be required in the public transportation corridor … based on the COVID-19 community levels, risk of new variants, national data, and the latest science.”

The announcement followed 92 congressional Republicans writing the TSA to express that they “believe TSA’s mask mandate should be allowed to expire later this month,” citing “strong declines in COVID-19 cases and the Center for Disease Control and Prevention’s (CDC) latest guidance eliminating indoor mask requirements for much of the population.”

Republican Sen. Rand Paul of Kentucky vowed to force a vote on the matter, and the Daily Caller reported that on Tuesday the Senate voted to pass his resolution, which declares “that Congress disapproves” of the TSA rule.

“Today, the Senate said enough is enough, and sent a message to unelected government bureaucrats to stop the anti-science, nanny state requirement of travel mask mandates,” Paul declared after the vote.

Seven Democrats voted for the resolution, including moderates Joe Manchin of West Virginia and Kyrsten Sinema of Arizona. The only Republican to vote against the measure was Mitt Romney of Utah, who suggested that elected lawmakers should defer to medical bureaucrats on such matters:

A GOP aide in Romney's office says he voted against Sen. Rand Paul’s measure to repeal travel mask mandates because, as he has been vocal about in the past, he believes it’s important for public health officials to make these types of decisions, not politicians

A body of publicly available evidence indicates the ineffectiveness of masks, such as the CDC’s September 2020 acknowledgement that masks cannot be counted on to keep out COVID when spending 15 minutes or longer within six feet of someone, or a May 2020 study published by CDC’s peer-reviewed journal Emerging Infectious Diseases that “did not find evidence that surgical-type face masks are effective in reducing laboratory-confirmed influenza transmission, either when worn by infected persons (source control) or by persons in the general community to reduce their susceptibility.”

The White House made clear Tuesday that, in the unlikely event the resolution passed the Democrat-controlled House of Representatives, President Joe Biden would veto it. Still, the bipartisan vote underscores the political risks Democrats face by doubling down on the issue. In recent months, party consultants have privately urged the party to distance themselves from mask mandates, advice taken by various governors and mayors across the country.