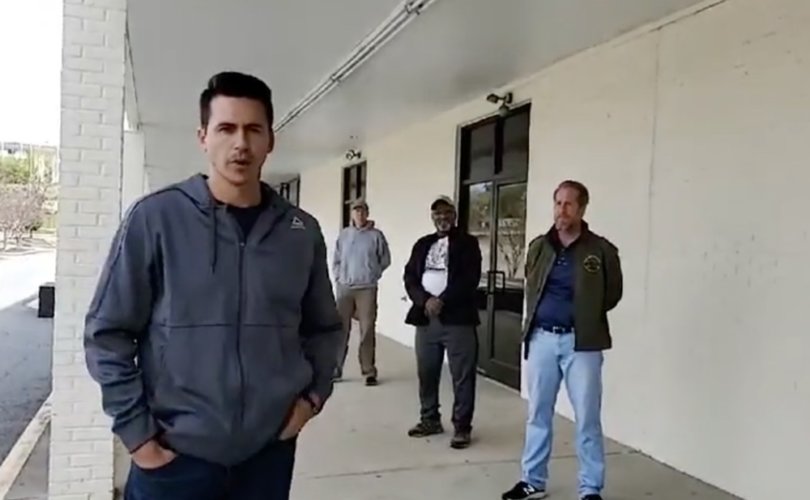 NORTH CAROLINA, April 1, 2020 (LifeSiteNews) – Police in North Carolina made another seven arrests of religious pro-life activists Monday for gathering outside of an abortion center, allegedly in violation of their jurisdiction’s coronavirus stay-at-home order.

Jason Oesterreich, Justin Reeder, Isaiah Burner, Andre Gonzalez, Richard Whittier, Leroy Stokes Jr., and John Mcatee, were arrested Monday outside of area abortion center A Woman’s Choice, according to a press release from the Greensboro Police Department. They were charged with violating the Guilford County Stay at Home Order, as well as with Resist Delay and Obstruct a Public Officer.

“Greensboro Police Officers made every attempt to gain voluntary compliance” before making the arrests, the press release claims.

Pastor Keith Pavlansky of Personhood North Carolina tells LifeSiteNews that the group practiced social distancing at the gathering, and brought with them face masks as well as hand sanitizer. The men have since been released, and are awaiting a court date in June. Pavlansky said that before then, he’s personally hoping to see a judge “put an injunction on this thing so at least they’re not arresting people on that unlawful basis. They have violated our civil rights.”

The Charlotte-based pro-life group Love Life says that before any of this happened, their attorney reviewed the details of the stay-at-home order with the police lieutenant, who in turn consulted with the city attorney.

Sign LifeSite’s petition in support of these pastors here.

Oesterreich, Reeder, and Burner, who are with Love Life, were previously arrested Saturday at the same location. They caught the previous incident on video, which shows the group taking care to keep their distance from one another (per “social distancing” guidelines) and attempting to read the language from the order which they argue allows for their presence among “outdoor activities.”

Rather than making “every attempt to gain voluntary compliance,” the officers in the video made no attempt to address the pro-lifers’ understanding of the county’s order, which states that activities as trivial as golfing can qualify as an “essential” outdoor activity, and gives no clear indication why civil public activism would not be at least as permissible.

All this comes as North Carolina allows business as usual to continue in abortion centers, where pro-lifers have noted that patients are typically much closer together than six feet in an enclosed space. While many states have ordered the suspension of non-urgent medical procedures to conserve supplies and contain the virus, and some of those states have expressly halted abortions for the same reason, North Carolina has so far yet to do either.

“It’s a sad, crazy time, because we’re in one parking lot where they can see us and leave us alone, but as soon as we crossed over to a parking lot next to the abortion center, that’s when the police began arresting,” Pavlansky said. “So it reveals the forethought and intentionality of targeting us for wanting to pray next to the abortion center […] if we were at a liquor store there would be no problem whatsoever.”

“It’s a little coincidental that Greensboro, North Carolina of all places was the hotbed of the original sit-in of the civil rights movement,” he added. “And here we are, almost sixty years to the day. The same kinds of things are happening again. Civil rights are being violated.”

“Love Life offers essential services” such as “pre-abortion counseling, post-abortion counseling, certainly when we’re there we try to direct women to pregnancy care centers and ultrasounds that are available,” Pavlansky noted. All this “fits well within the description of essential services as listed by the State of North Carolina and Guilford County.”

Reeder, who is a pastor as well as the founder of Love Life, said Tuesday that while individuals remain forbidden from getting close to the building, some good has already come out of local pro-lifers’ civil disobedience, in the form of New Hope’s mobile unit being allowed to remain on the sidewalk as of Tuesday, ensuring that at least some volunteers will be free to minister and offer resources to women considering abortion.

“That abortion center remains open, but praise God, there is a voice that is allowed over there now because Christians were willing to lay their lives down,” Reeder said.

“I hope all Christians will be praying about this and understand that it’s not a case of trying to unnecessarily rile the authorities,” Pavlansky stressed. “They came hunting for a fight, and the entire church needs to be aware of that and pray for a just outcome. The city of Greensboro chose to use COVID to achieve the goal of having no Christians present in front of the abortion clinic.”