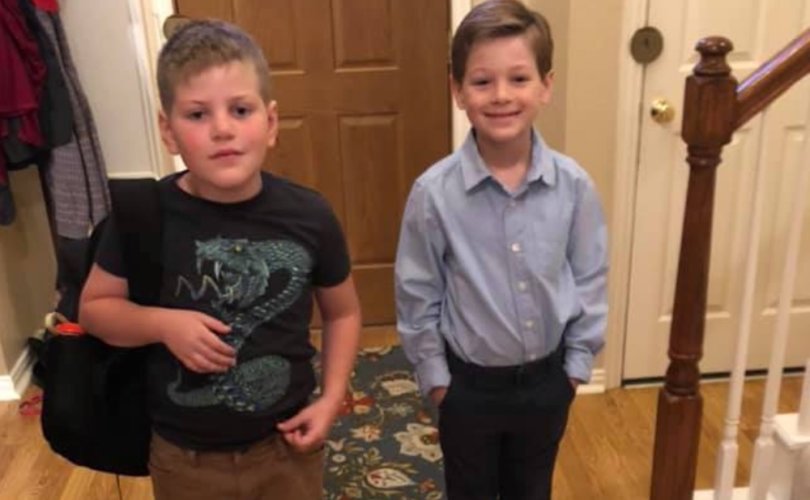 PETITION: Support Dad and Texas Governor's bid to save 7-year-old boy from being turned into girl #ProtectJamesYounger Sign the petition here.

DALLAS, Texas, November 5, 2019 (LifeSiteNews) – Seven-year-old James Younger, whose mother enrolled him in kindergarten as a “girl,” has finally been able to attend school as a boy for the first time.

James’ parents’ fight over whether he should be subjected to a gender “transition” garnered national attention after LifeSiteNews and The Texan reported on the trial.

Mr. Jeffrey Younger was fighting to prevent his ex-wife Dr. Anne Georgulas from “transitioning” James into “Luna.” The custody battle over James and his twin, Jude, sparked public outcry. Texas Gov. Greg Abbott called for an investigation into the situation, as did other conservative leaders.

On October 24, Judge Kim Cooks awarded Dr. Georgulas and Mr. Younger joint managing conservatorship and joint decision making of James and Jude. The new ruling increased Mr. Younger’s time with his boys and allowed him to have his boys on school nights. Dr. Georgulas will not be able to subject James to medical “transitioning” without Mr. Younger’s consent, although a court-appointed individual will be able to make decisions if the parents cannot come to an agreement.

In the ruling, one of the court findings highlighted a statement from Dr. Albritton, the custody evaluator, that Dr. Georgulas was “over and above affirming.” The court also found that “the Mother has exceeded the scope of the exclusive rights and duties provided in the prior order.”

Prior to the judge’s ruling, James had always been with his mother, who calls him “Luna,” when attending school.

Moving forward, James will be allowed to pick what name he wants to be called at school.

In addition to granting conservatorship, Judge Cooks placed a gag order on Mr. Younger and Dr. Georgulas preventing them from speaking about the case until James and Jude turn 18. Judge Cooks also ordered that SaveJames.com, a website created by friends of Mr. Younger and at the time of the trial run by Mr. Younger, be taken down.

SaveJames supporters have since created a new website in James’ honor to fight to save thousands of children from chemical castration via puberty blockers and cross-sex hormones. This was displayed prominently on the old site before it was removed.

The new site is now sjsavethousands.com.

SaveJames supporters see the fight as far from over and are focusing their efforts on legislation to protect children from gender “transitioning.”

Alan Echols, a SaveJames supporter from early on who now helps with the SaveJames Facebook page, told LifeSiteNews, “We determined to get louder and now have thousands who will hold those Senators and Representatives accountable during the next election. We the people are fed up with the attacks on children by the transgender agenda.”