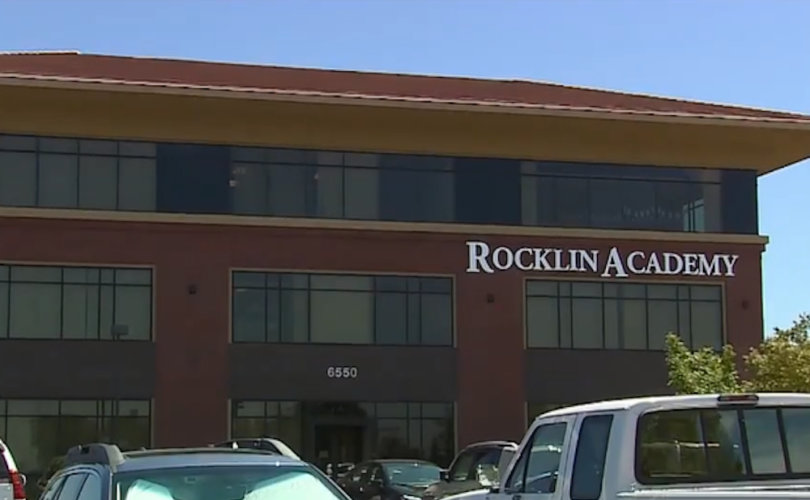 ROCKLIN, California, September 22, 2017 (LifeSiteNews) — Forty-one families have pulled 73 children from the elite Sacramento-area Rocklin Academy charter schools as the board continues to defend a kindergarten transgender lesson several parents say traumatized their 5-year-olds and that parents weren’t told about beforehand.

A mother who pulled her son from Grade 6 and daughter from Grade 3 at Rocklin Academy Gateway, where the incident took place, has kept a tally of parents who’ve done likewise.

“It was just the tipping point for most families,” the parent, who asked her name not be published, told LifeSiteNews.

Some parents pulled their kids “solely for this,” while other had “multiple reasons, but yes, this was part of everyone’s reason,” she said.

The controversy erupted after a lesson in which the boy appeared in girl’s clothes and was reintroduced to his kindergarten classmates as a girl.

Teacher Kaelin Swaney also read the pro-transgender “I am Jazz” during the lesson, which took place just before summer vacation.

A number of parents are upset because they weren’t told about the lesson that has left their children disturbed and afraid they, too, will “change” into the opposite sex.

Moreover, it’s still not clear what happened in the classroom because Swaney and the board refused to tell parents, and the board’s account differs from what a number of parents say their five-year-olds told them, the parent told LifeSiteNews.

What appear to be “inaccuracies” in the board’s accounts “make us feel betrayed as parents,” she said.

The board and administration “didn’t talk to the parents of the children in the class to get the story.”

The Rocklin Academy school board countered that it didn’t have to tell parents about lessons on gender identity because it wasn’t sex education. California law requires parental notification and allows opt out for sex education.

Moreover, the board claims not affirming the five-year-old boy’s transition to a “girl” will leave it open to lawsuits because California bans discrimination based on gender identity and expression.

On Monday, the five-member board unanimously rejected a “model parent proposal” to allow opt-out for lessons on gender identity and parental review of sensitive material before it hits the classroom.

The board did approve a policy directing teachers to try to let parents know beforehand that sensitive material would be taught, but the measure is “really weak” according to Greg Burt of the California Family Council.

Moreover, at “every board meeting, the administration seemed very adversarial to the parents,” according to the parent who spoke to LifeSiteNews.

But the August 21 meeting was the deal-breaker for her.

That’s when a number of teachers defended Swaney, she said.

“They were saying, ‘your kids will surprise you, they’re so accepting and loving, this is a great topic for kindergarteners to learn.’ … They were there to tell us parents to get out of the way,” she said.

“I did not feel safe sending my kids to school after that meeting,” the parent added.

“It’s a very tense atmosphere over there right now. It’s very like, which side are you on,” she said. “You don’t know who to trust, you don’t know who’s looking at you the wrong way.”

And with the board voting Monday to continue enforcing transgender ideology, more parents will be leaving, Burt predicted.

“Several families are waiting until the end of the week” to pull their children out, she told LifeSiteNews in an email.

Elizabeth Ashford, a spokesperson for Rocklin Academy Family of Schools, agreed that more families will leave, “which is really a shame,” she told NBC-affiliate KCRA3 TV.

Ashford said 14 families and 23 kids have left over the controversy.

LifeSiteNews called Ashford at the public relations firm Fiona Hutton & Associates to confirm this figure, but she did not respond by deadline.

Many families might not have given the reason for their departure, suggested the parent who spoke to LifeSiteNews anonymously.

When the school emailed her to confirm her son’s leaving, it listed “moved during school year” as the reason.

The schools reportedly have a waiting list of 1,300, but a friend whose child was 110 on the list for a specific grade at the beginning of this year refused a spot the other day, she said.

“So that means they called 110 people before they called her, and they all turned the spot down,” the parent said.

The parent wanted to make it clear that those who left or are leaving Rocklin Academy Gateway are “not saying anything hateful or bigoted” regarding the transgender student.

“In fact, [many] of us have cried over this poor child because we feel for him. I don’t think he’s in a great situation.”

But the “board didn’t show any concern for the families or any respect for parents and our rights for our children,” she added.

“Many, many families are trying to figure out what to do with their kids,” she added. “Parents are saying they’ll homeschool if they have to.”