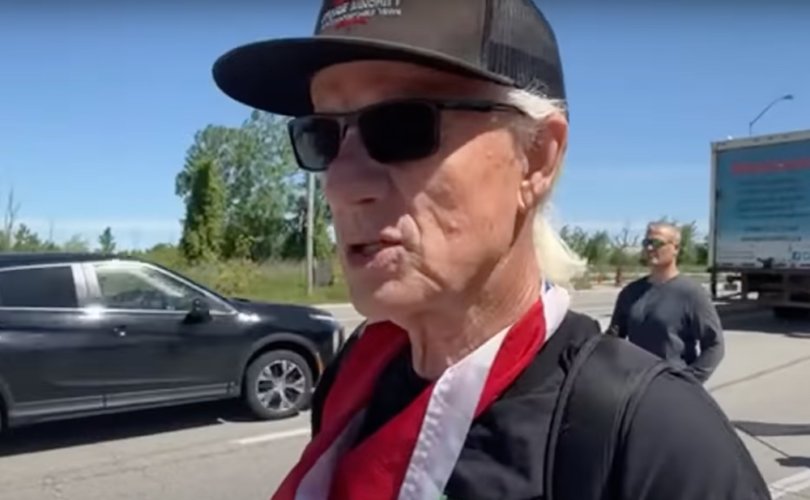 (LifeSiteNews) — A 70-year-old retired truck driver from Ontario has joined Canadian Armed Forces veteran James Topp on the final two-week leg of his cross country walk to Ottawa in the name of freedom.

Walter Hofman, who retired in November 2021, will accompany Topp on his nationwide walk to Parliament Hill in Ottawa in support of Canadian freedom and to call for an end to Prime Minister Justin Trudeau’s COVID-era mandates.

After joining Topp’s journey on Thursday in Sudbury, Ontario, Hofman will be walking an astonishing 500 kilometers (roughly 300 miles) to the nation’s capital of Ottawa.

Speaking to LifeSiteNews, Hofman’s wife Wendy explained that he began training to join Topp in March, and since then has racked up a staggering 1,200 km.

To keep up with Topp’s pace, Hofman walked 55 km on the first day of the journey in order to make it to Parliament Hill by Topp’s projected deadline of June 30, one day before Canada Day.

His wife told LifeSiteNews that while the march to Ottawa with Topp is for freedom, an integral part of her husband’s journey, as a devout Christian with decades of ministry experience, is to use this opportunity as a “chance to let people know about the love of God.”

She said her husband’s core goal is to spread the truth of “freedom in Christ.”

In an interview with Live from the Shed, Hofman described how before the Freedom Convoy protest that took place in February he was relatively unaware of the growing pro-freedom movement in Canada.

After seeing the massive turnout and the support for the truckers, he decided to head to Ottawa. Hofman was there for the final weekend of the Freedom Convoy when “things went south” due to Prime Minister Justin Trudeau invoking the never-before-used Emergencies Act to physically crackdown on the protesters.

Explaining the impact Topp had on him and why he chose to train to join the veteran on his arduous march, Hofman told Live from the Shed that all it took was “one video” of the former soldier to inspire him to join him.

“I saw one video of James and I said, ‘That’s my man, he’s the guy,’ and I said right there, ‘I’m going to join him in Sudbury and I started training.’”

Explaining the events from her perspective, Wendy Hofman told LifeSiteNews she is extremely proud but unsurprised by her husband’s vigor and willingness to help the freedom movement in any way he can, as his entire life has been one of service.

“That is how he lives his life. He is a very caring, compassionate man,” she told LifeSiteNews.

Topp began his 5,000 km walk in February in protest of Trudeau’s vaccine mandate for domestic travel and federal employees, and has since gained a heroic reputation among pro-freedom Canadians.

Footage from Topp’s journey shows crowds greeting him in various cities across Canada, cheering on the retired soldier.

The official website for the journey, Canada Marches, features a live GPS map of Topp, with information about why he chose to embark on the endeavor and background information on his life.

We rise to serve Canadians with honesty, respect and compassion, for the purpose of reuniting our people. We do this, with the intention of ensuring our government upholds the laws that support Canada’s Charter of Rights and Freedoms.

Asked by LifeSiteNews what type of support Hofman desires, she asked for prayers.