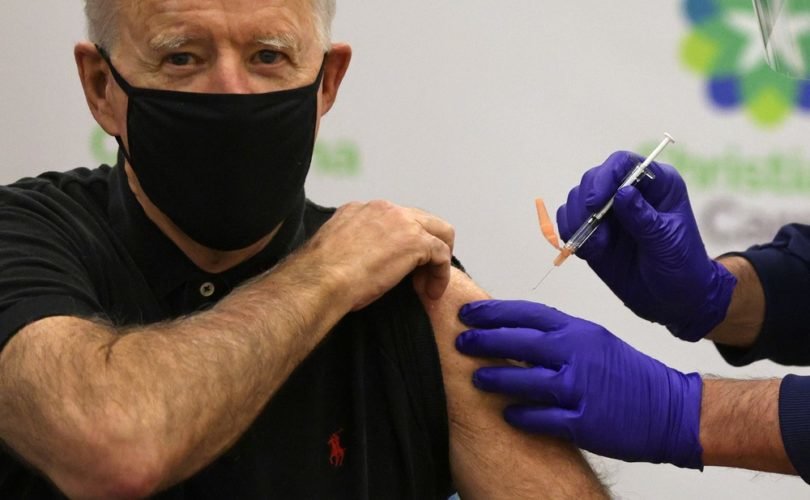 (Family Research Council) – Joe Biden isn’t a doctor, and he’s certainly not your doctor. But that hasn’t stopped the president of the United States from making every Americans’ health decisions for them. The “scare-monger in chief,” as former Civil Rights Division leader Roger Severino calls him, has decided that when it comes to COVID, the facts, the law, and the science don’t matter. You will be vaccinated, this Democratic leadership says ­– and surrender every constitutional right to privacy, employment, personal safety, and free speech until you do.

When the president announced his outrageous new COVID policy, that every federal employee cough up the information on whether or not they’d been vaccinated, even the liberal media was stunned. This raises “a lot of uncomfortable questions,” the AP pointed out – not the least of which is the profound abuse of Americans’ civil rights. Who’s going to pay for the testing? How will religious exemptions be accommodated?

If federal employees are still working remotely, will they be required to test? What about HIPPA laws? Under this shocking new intrusion into people’s lives, Biden has decided to make it so burdensome for people to be unvaccinated that Severino thinks there’s a massive case to be made in federal court.

— Article continues below Petition —
PETITION: No to mandatory vaccination for the coronavirus
Show Petition Text
1081783 have signed the petition.
Let's get to 1100000!
Thank you for signing this petition!
Add your signature:
Show Petition Text

“No COVID-19 vaccine on the market has yet been granted full FDA approval,” Severino points out, “only Emergency Use Authorization, which means, according to statute, that Americans have ‘the option to accept or refuse administration of the product’.” Not in Joe Biden’s America. After six months of trying to eliminate mandates, Democrats want to subject workers to forced testing, forced masking, and forced health care disclosures. “That’s irrational,” Severino argues – “unless, of course, the point is not infection control, but making the lives of every last unvaccinated person as miserable as possible. Lack of consistency and evidence of pretext are killer arguments against mandated medical tests under the ADA and should be deployed immediately in lawsuits,” Severino insists. “Lots of them.”

Meanwhile, the political dominoes are already falling. Speaker Nancy Pelosi’s (D-Calif.) over-the-top crackdown on maskless House members (most of whom have been vaccinated) has sparked near-mutiny on the far-side of the Capitol. To the astonishment of people on both sides, she’s threatened to arrest visitors and staff who are in the Capitol complex without face coverings. Rep. Matt Rosendale (R-Mont.), like so many conservatives, was livid over the announcement. “This is crazy,” he fumed on “Washington Watch.”

“It’s not America when you start [acting like a totalitarian state]. And the strange thing is,” he pointed out, “if you go just to the Senate side of the Capitol, there’s no mandate! So apparently there’s some invisible barrier that falls somewhere around the rotunda that splits the House and the Senate. So on the Senate side,” Rosendale half-joked, “I guess this is not contagious and not a problem… And again, most of this boils down to just control of people’s lives and those who want to try and take control over our lives.”

And for what? There’s no science that says this is necessary. This administration has completely dismissed the idea of natural immunity from the tens of millions of Americans who’ve already had the virus, which – medical experts say, is better than the vaccine itself. In Israel, a new study showed that people who had the antibodies are seven times less likely to get infected than vaccinated individuals. “And yet our FDA, our CDC, completely ignores the claims that they’re basing on real science,” Senator Ron Johnson (R-Wisc.) vented on “Washington Watch.”

“We have tossed the basic premise of medicine aside. And I cannot explain why… Now, they’re not providing the American people with the data to back up their other pronouncements – [like these new] guidances on masks. Why don’t we know, like India now knows, [that] 60 percent of the Indian population has antibodies for COVID. What is that level in America? We’re wealthy. We can do studies. We can estimate how close we are to herd immunity. That would be useful information for American people to have. But we don’t have it.”

And yet there’s this heavy-handed approach from the government, which is turning people against the very vaccine they’re trying to promote. As I’ve said: I’m not against the vaccine. What I’m against is people not being able to choose for themselves whether they need it based on their own health. A government mandate is absolutely the wrong way to go about this, Rosendale agrees. “This is Orwellian, it’s draconian,” and it’s eroding the public trust. “You’re getting so much differing information from the so-called ‘experts’,” he argued. One day the CDC says no masks, and the next day it completely reverses itself. It’s no wonder the general public is reluctant to take the agency seriously.

Adding to that frustration, Johnson pointed out, is the collusion between Big Tech and government that’s shutting down information Americans could be getting. “They’re silencing any kind of opposition whatsoever. They’re controlling the conversation that people are trying to have. They are supposed to be platforms… [yet they’re really just] the propaganda arm for the Left… We have this marvelous technology called the Internet, where you have this free flow of information and ideas. But doctors who were actually treating patients… they were censored on YouTube. Now, rather than allowing doctors to try different theories of the case, try[ing] different off-label medications, and then broadcast[ing] that success, everything had to filter through government agencies – that apparently are now the voice of God, basically the font of all wisdom.”

At the end of the day, this is all going to come down to an election, because as long as we have the current regime in place, we’re going to continue to get this type of authoritarian, over-reaching arm of government. “It should not be up to the president or your employer as to whether you get the vaccine,” Rosendale argued. “That’s unacceptable to me, and I think it’s going to be unacceptable to most Americans.”