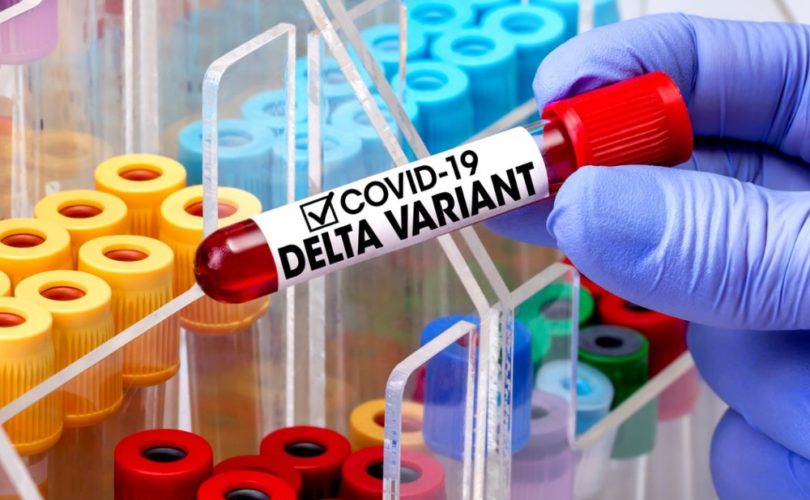 The data were derived from ICMR’s fourth national serosurvey conducted between June 14 and July 6.

“The fourth round of the survey covered 36,227 individuals to estimate seroprevalence among children aged 6-17 years, adults and healthcare workers. It was conducted in the same 70 districts from 20 states and a Union Territory selected during the previous three serosurveys.”

Daniel Horowitz wrote a comprehensive summary of actual data from India, as well as from the United Kingdom and Israel, at Blaze Media Thursday – data that contradict the basis for the Biden administration’s strategy of shaming the unvaccinated in the United States.

“Rather than proving the need to sow more panic, fear, and control over people, the story from India — the source of the ‘Delta’ variant — continues to refute every current premise of COVID fascism,” Horowitz observed.

Centers for Disease Control and Prevention (CDC) Director Rochelle Walensky testified last week at a Senate hearing the “Delta” variant is responsible for about 83 percent of all new COVID cases in the United States.

Walensky asserted nearly two-thirds of U.S. counties have vaccinated less than 40 percent of their residents and said this resistance to getting vaccinated is “allowing for the emergence and rapid spread of the highly transmissible Delta variant.”

Claiming COVID deaths have risen by nearly 48 percent just within the previous week to an average of 239 daily, Walensky said, “Each death is tragic and even more heartbreaking when we know that the majority of these deaths could be prevented with a simple, safe, available vaccine.”

Armed with data from the CDC, the Associated Press (AP) provided the following report at the end of June, setting the stage for a massive divisive campaign against Americans choosing not to get a vaccine:

“Nearly all COVID deaths in the U.S. now are in people who weren’t vaccinated, a staggering demonstration of how effective the shots have been and an indication that deaths per day — now down to under 300 — could be practically zero if everyone eligible got the vaccine.”

Horowitz summarized the Biden administration’s illogical strategy that appears laser-focused on pressuring more Americans into getting the jab, along with threats of more mask mandates and lockdowns for everyone:

“The prevailing narrative from Fauci, Walensky, and company is that Delta is more serious than anything before, and even though vaccines are even less effective against it, its spread proves the need to vaccinate even more people. Unless we do that, we must return to the very effective lockdowns and masks.”

However, as Horowitz observed, India’s “Delta” variant experience contradicts what Fauci and company claim is happening in the U.S.

With India’s current vaccination rate of only about 6 percent, most diagnosed with Delta in that country have experienced cold-like symptoms.

“What we can conclude definitively is that strict mask-wearing (especially among health care workers) failed to stop the spread one bit,” Horowitz wrote. “Yet now they have achieved herd immunity and burned out the virus with just 3% vaccination (now up to 6%) with roughly one-sixth the death rate of the U.S. and the U.K. and less than one-half that of Israel.”

“Delta and Delta Plus appear to be infecting equally those unvaccinated and vaccinated as shown from data in the UK and Israel. This is very different from what is in major media at this time which has the government-issued talking point ‘we have a current crisis of the unvaccinated’.”

McCullough explained the difference between reality and what is reported:

“About 40% of hospitalizations in the UK and 60% in Israel are in those previously vaccinated and with the obvious failure of the vaccine to protect against Delta or Delta Plus. One thing is clear, those who have natural immunity from prior COVID-19 infection have robust, complete, and durable immunity and they are not coming down with the ‘Delta blues’.”

McCullough pointed out, nevertheless, that, while the Delta variant is “the mildest form of COVID-19,” older individuals should seek early outpatient treatment as has been advised by the Association of American Physicians and Surgeons (AAPS).

“Indeed, cases of Delta hospitalization and death that are mentioned deserve one question,” he observed. “Why the patient didn’t receive early ambulatory treatment and how can this be avoided in the future.”

Horowitz echoed the same sentiment: that the Biden administration’s public health agencies are communicating the wrong messages about Delta:

“The fact that Israel and the U.K. have so many Delta cases yet so few deaths relative to the winter spread of the original strain demonstrates that Delta is likely much weaker and India’s numbers are probably close to accurate. Remember, most of India’s spread, unlike in the West, occurred with Delta, long after the ancestral strain that hit the West was gone. If it really was the bloodbath some are suggesting (a tenfold undercount of deaths, in their estimation), why is the data from the U.K. showing just the opposite?”

According to a Public Health England technical briefing on the variants of concern in the U.K., the case fatality rate in the U.K. from Delta as of July 5 is 0.2% (Table 3, p. 11).

Professor Tim Spector, who runs the study, said, with Delta, “People might think they’ve just got some sort of seasonal cold and they still go out to parties and they might spread around to six other people.”

“The message here is that if you are young, you are going to get milder symptoms anyway,” he added. “It might just feel like a bad cold or some funny ‘off’ feeling – but do stay at home and do get a test.”

Horowitz observed it is “good news” that the U.K. media are frenzied about people having “cold” symptoms:

“This virus has attenuated for most people to the point that they can’t even distinguish it from a cold, much less a flu. Thus, the fact that India achieved most of its immunity throughout the spread of the Delta variant actually lends a lot of credence to the fatality rate of one-sixth of that of the U.S. and the U.K., which experienced most of its deaths from the ancestral strain.”

Similarly, the Jerusalem Post observed Israel’s Ministry of Health reported that, of the 143 Israelis who were hospitalized last week, 58% were vaccinated, 39 % had not had the jab, and 3% had only completed one dose of the vaccine.

In addition, 15 of the 20 Israelis who died this month from the virus were fully vaccinated.

“Thus, the experience from India and the Delta variant teaches us the exact opposite of what the panic-mongers are pushing. Natural immunity, not vaccination, is king. Which explains the dichotomy between India and countries like Gibraltar. In Gibraltar, nearly every adult in the tiny country has been vaccinated, yet it has the third-highest per capita rate of infection in the world.”

Similarly, most adults in the Seychelle Islands had been fully vaccinated by the end of June, but the death rate from COVID has increased steadily.

Jane Orient, M.D., executive director of AAPS, noted that, before choosing to get vaccinated, people should consider that “estimates of bad COVID outcomes assume that patients will be denied early or preventive treatment, which is likely 70 to 80 percent effective.”

“Breakthrough infections in vaccinated people are probably under-reported,” she added. “Since April, CDC has been tracking only cases that resulted in hospitalization or death.”

In India, Horowitz observed, states that used the drug ivermectin to treat COVID exhibited a “much sharper and quicker drop in cases in May.”

“Imagine if the Western world used ivermectin and many other treatment options preemptively and prescribed them at every testing station,” he posed. “That is how you flatten a curve.” Horowitz noted in June that, indeed, the “biggest story of COVID” has been the “censorship of ivermectin”:

“The lesson is clear: The only way out of this is for most people to get it, and the best way to do that safely is to make sure early treatments with drugs like ivermectin are made available and to be used even preventively for vulnerable populations.”

“In the United Kingdom, the variant is now responsible for 90% of all new infections. In the U.S., it represents 20% of infections, and health officials say it could become the country’s dominant type as well…The vaccines were protective for those who got both doses but were less so among those who got one dose.”

“It’s why experts say it’s important to be fully vaccinated,” AP concluded. “And it’s why they say making vaccines accessible globally is so critical.”

The Biden administration and its media minions want every American to believe COVID deaths are preventable with more vaccines.

“If this is really about saving lives, rather than doubling down on all of the things that have failed and distorting data and history to comport with pseudo-science,” Horowitz asserted, “they would try the one thing they have shunned until now – actually treating the virus before people have trouble breathing.”

Reprinted with permission from Lumen News