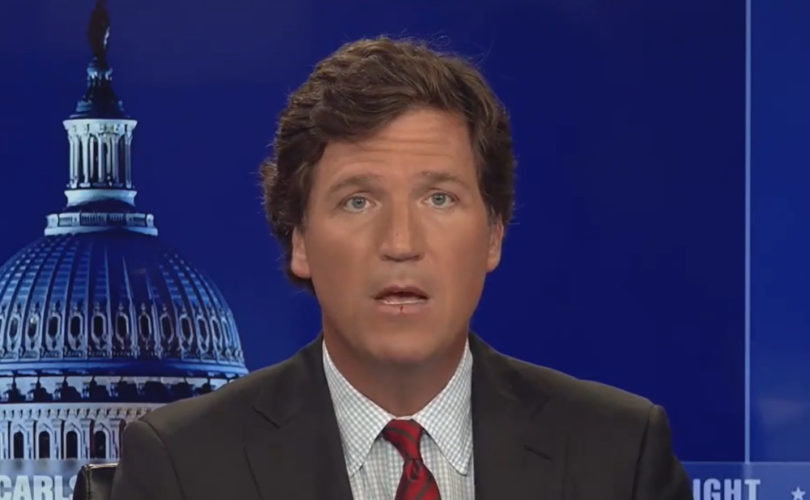 (WND News Center) – A former deputy assistant to the president and chief of staff of the National Security Council says the Joe Biden administration needs to answer a couple of key questions about the “unmasking” of Fox News show host Tucker Carlson.

Carlson’s name was acquired by the National Security Agency in some of its email spying, and then given to someone in the administration, who then leaked it publicly.

That is just wrong, Fred Fleitz wrote at the Federalist, and someone needs to be giving some explanations.

Those questions include who made the unmasking request, and will that person be held accountable for leaking classified information, as well as does Biden have a policy on demands by senior officials to unmask the names of Americans.

Fred Fleitz now is president and CEO of the Center for Security Policy, after having held national security jobs for 25 years in the CIA, DIA, Department of State and House Intelligence Committee.

“The leaking of Carlson’s identity by Biden officials is a serious matter because it appears to confirm the Biden administration’s use of U.S. intelligence agencies to target its political enemies. But there’s an even more serious concern here: spying on journalists and leaking information based on their private communications constitutes a serious threat to the freedom of the press,” he said.

It was only days ago that the NSA confessed it revealed Carlson’s name, found in conversations it was monitoring, by “unmasking” him, a process through which names are revealed to administration officials when they demand to know them.

Carlson, host of the most-watched cable news show in the United States as of just weeks ago, earlier confirmed to his audience that the NSA of the Biden administration has been spying on him electronically.

That, he explained, appears to be a crime under federal law.

He charged that it appears to be an attempt to gather some sort of information that could be used to take his show off the air.

Tucker, long a critic of the Biden administration, said, “We heard from a whistleblower within the U.S. government who reached out to warn us that the NSA, the National Security Agency, is monitoring our electronic communications and is planning to leak them in an attempt to take the show off the air.”

“Now that’s a shocking claim and ordinarily we’d be skeptical of it. It is illegal for the NSA to spy on American citizens. It’s a crime. It’s not a third world country. Things like that should not happen in America, but unfortunately they do happen. And in this case they did happen,” Carlson confirmed.

The NSA, according to a report, has confirmed it did, it fact, reveal Carlson’s name.

NEW: The NSA has found no evidence to support Tucker Carlson’s accusations that the agency had been spying on him in an effort to knock his show off the air.https://t.co/8UH9YcN1XE

Fleitz noted, “The NSA cannot legally target the communications of Americans without an order from the Foreign Intelligence Surveillance (FISA) court. However, such communications are often ‘incidentally’ collected when an innocent American communicates with a legitimate NSA target, such as someone believed to be under the control of or collaborating with a hostile foreign power.”

“When this happens, the name of the innocent American is supposed to be ‘masked,’ or redacted. Senior U.S. officials are permitted to request the name of a masked American cited in an NSA report if the name is necessary to understanding the report. If the NSA approves an unmasking request, the name of the masked American is only briefed to the requesting official, who is advised that this information is extremely sensitive and cannot be revealed to others without the NSA’s permission.”

He charged that, “Journalists can’t do their jobs and speak freely if the U.S. government is spying on them. Sources will refuse to speak to reporters if they fear their confidential conversations will be picked up by intelligence agencies and leaked. The NSA should not be unmasking any journalist at the request of senior U.S. officials unless there is a gravely serious national security reason. That wasn’t the case with the Carlson matter — he was presumably unmasked because he is one of the Biden administration’s harshest critics.”

He said steps are needed “to stop this abuse of U.S. intelligence agencies to weaponize intelligence against American journalists. The NSA should only agree to unmask journalists with the approval of the NSA director. Such requests should be promptly reported to Congress.”