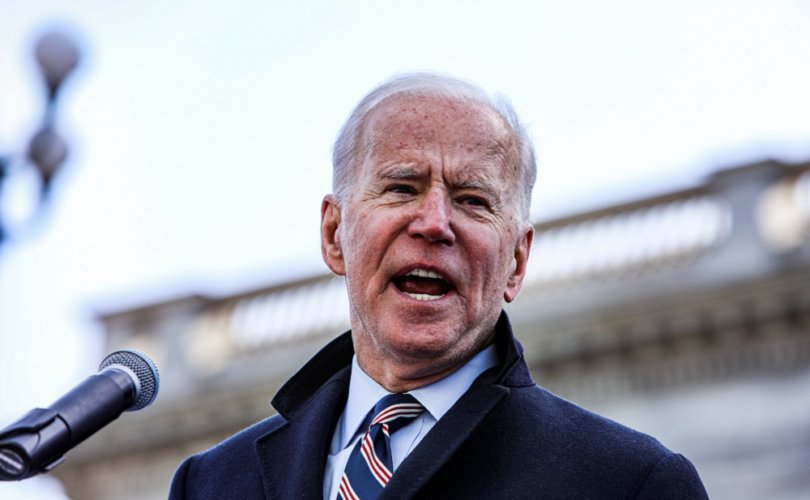 WASHINGTON (LifeSiteNews) — The Biden administration says it is not looking to mandate experimental COVID-19 jabs nationwide just hours after the president suggested the idea was on the table.

On July 29, President Joe Biden affirmed in a press conference that he would like to see more COVID-19 vaccine mandates from local governments and businesses.

Biden then appeared to indicate that a sweeping national vaccine mandate was also being explored, saying, “It’s still a question whether the federal government can mandate the whole country. I don’t know that yet.”

NOW – Biden on #COVID19 vaccines: “It’s still a question if the federal government can mandate the whole country, I don’t know that yet.” pic.twitter.com/JIuDwxJz24

Biden made the comment after remarking that “local communities” and “local businesses” can mandate the shots, adding that he “asked the Justice Department to determine whether they’re able to do that legally, and they can.”

As noted by the president, the Department of Justice (DOJ) stated in a July opinion letter for the Deputy Counsel for the President that it is lawful for employers and others to mandate the experimental drugs even though they only have emergency use authorizations (EUAs) instead of full approval from the Food and Drug Administration (FDA).

In the letter, the DOJ considered “whether the ‘option to accept or refuse’ condition in section 564 [of the Food, Drug, and Cosmetic Act] prohibits entities from imposing such vaccination requirements while the only available vaccines for COVID-19 remain subject to EUAs.”

The DOJ concluded that section 564 “does not prohibit entities from imposing vaccination requirements.”

Yet hours after Biden floated the idea of a nationwide mandate, a top White House official seemed to contradict the president, claiming the federal government was not considering a national mandate.

White House COVID-19 response coordinator Jeff Zients told CNN’s Wolf Blitzer the same evening that a top-down mandate from the federal government applying to all U.S. citizens was “not an authority that we’re exploring at all.”

Whether or not the White House is looking to mandate the experimental drugs for all Americans, the administration has openly encouraged mandates from employers and local governments and has dabbled in requiring the shots for select categories of Americans so far.

Last week, the Biden administration flexed its power by requiring all federal employees (roughly 4 million Americans) to get the jab or be subject to frequent testing, required mask wearing, forced distancing from colleagues, and restrictions on travel.

On July 26, the Department of Veterans Affairs became the first federal department to require COVID-19 jabs for medical employees including facilities staff. Meanwhile, California and New York are forcing state employees and health care professionals to take the shot, be subject to regular testing, or lose their jobs.

Biden has also called on state and local governments to offer to pay Americans $100 from leftover COVID-19 response funds to get the injection.

BIDEN: “I’m calling on all states and local governments to use funding they have received — to give $100 to anyone who gets fully vaccinated.” pic.twitter.com/DA67dEFKuH

It remains to be seen whether the Biden administration will reverse itself again and once more consider a federal “vaccine mandate” in the future.

One catalyst for future sweeping mandates may be the approval of the shots by the FDA. Full FDA approval would give state and local agencies and businesses greater leverage to force Americans to get the shot without facing legal challenges.

Dr. Francis Collins, director of the National Institutes of Health (NIH), said last week that full FDA approval of the shots is anticipated, “maybe in the next couple of months.”

If approval is granted, Collins said “the legal ability to mandate becomes a lot stronger.”

Recognizing the weight of FDA approval for adding force and legitimacy to vaccine mandates, Democrat New York Gov. Andrew Cuomo remarked that “[u]nder emergency use authorization states are limited as to what they can mandate,” CNN reported.

“Once the vaccine is finally approved,” Cuomo added, “then the state has more legal authority to mandate the vaccine.”

Even without FDA approval, however, many employers and local governments have begun requiring the experimental drug, saying those who decline to take it are imperilling the lives of others.

Last week, New York Mayor Bill de Blasio said “the “voluntary phase is over,” claiming that people who refuse to take the jab “are criminal at this point.”

To date, about 70% of all adult Americans have gotten the experimental COVID shot, however “cases” are once again rising, attributed to the “Delta variant.”

Biden administration officials as well as members of the mainstream media have repeatedly placed the blame for the increasing case numbers on unvaccinated Americans, saying America is experiencing the “pandemic of the unvaccinated.”

The continually heightened rhetoric regarding surging Delta variant caseloads comes despite evidence that suggests the variant is less dangerous than the original strain of the coronavirus.

Paul cited statistics from a recent U.K. study that found of the 52,000 “unvaccinated” people who tested positive for the virus, only six under age 50 died.

“But if you say that,” Paul added, “Facebook will take you down, they’ll chastise you … say you’re spreading mistruth. But it’s absolutely factual, the Delta variant is more transmissible but far less deadly than the virus from last year.”

As of last week, at least 20 athletes were pulled from competition in this year’s Tokyo Olympics due to contracting COVID-19, among at least 200 people affiliated with the Games who have tested positive for the virus.

Though it is unclear precisely how many of those Olympians and staffers with positive tests had received their full dose of the shots, the International Olympic Committee (IOC) estimated that about 85% of athletes and staffers currently residing in the Olympic Village have gotten full doses of the jab.

Meanwhile, 74% of infected people in a recent Massachusetts “outbreak” were found to have been “fully vaccinated.”

The Massachusetts “outbreak” allegedly contributed to the CDC’s recent reversal of its mask guidance, causing the agency to begin recommending “fully vaccinated” people return to wearing masks in many indoor settings.