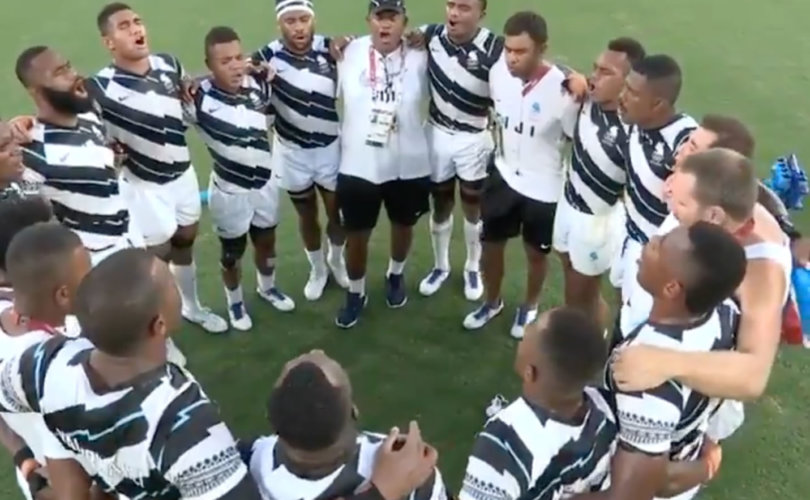 By the Blood of the Lamb

In the Word of the Lord

While it is unknown whether all of the players on the team are Christian, their voices united in song in praise of the Lamb of God presented an inspiring, “spine-tingling” image to the world.

The song that filled the Tokyo stadium is a traditional hymn, E Da Sa Qaqa.

In preparation for the Olympics, the men had spent five arduous months away from their families, locked away in a bubble due to harsh COVID restrictions.

One member of the team, Asaeli Tuivuaka, told the UK Express:

“We’ve been away five months.

My father just passed away last year, he was the man who encouraged me to play rugby, and this gold medal is for him, and for my baby boy. He is one year old now, and I haven’t seen him for five months. I didn’t even get to kiss him goodbye when I left, it is tough for me … ”

Tuivuaka was unable to finish his sentence as he broke down in tears.

Commentator Paul Kerensa wrote that when he thinks of Fiji, “I think of a South Pacific island … the bliss of lapping waves, and perhaps a volcano or two. According to the Global Barometer of Happiness, Fijians are the happiest people on the planet.”

“But now I know them for bringing their faith to the sport field,” he declared.