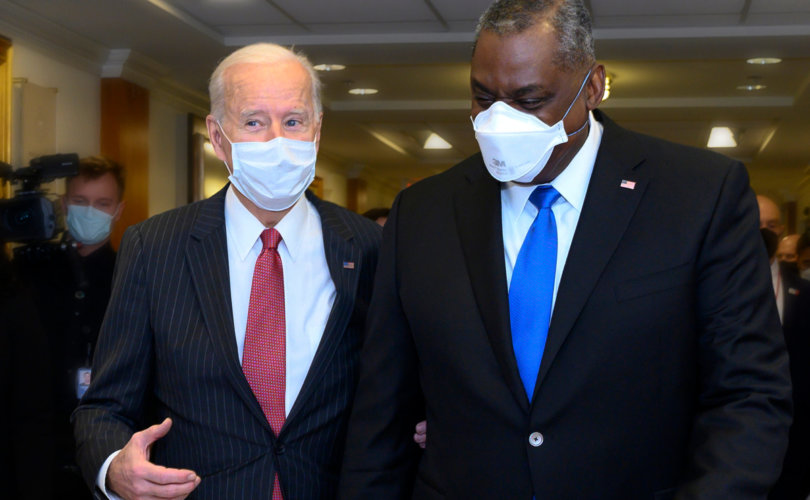 WASHINGTON, D.C. (LifeSiteNews) – U.S. Secretary of Defense Lloyd J. Austin III just released a memo stipulating that he will make COVID-19 experimental injections mandatory for “all Service members” within a matter of weeks.

The letter, reported first by the Associated Press and subsequently released August 9, is signed by Austin and deals with his task of determining “how and when we might add the coronavirus disease 2019 (COVID-19) vaccines to the list of those required for all Service members.”

Austin declared that his memo comes after consultation with the Joint Chiefs of Staff, the various secretaries of the military departments, and the White House COVID response force – for which Dr. Anthony Fauci is chief medical adviser.

As a result, Austin announced that he will seek presidential approval for the plan to mandate the COVID-19 injection “no later than mid-September, or immediately upon the U.S. Food and Drug Agency (FDA) licensure, whichever comes first.”

He defended his decision by alluding to reports suggesting that FDA approval could arrive for the injections as soon as early September, and adding that the time until this arrived, along with the expected presidential approval, would be spent “preparing for this transition.”

“I have every confidence that Service leadership and your commanders will implement this new vaccination program with professionalism, skill, and compassion,” Austin declared. “We will have more to say about this as implementation plans are fully developed.”

Before the injection is given full FDA approval, any mandate would be a direct violation of federal statute and thus service personnel would have the right to decline. However, Austin’s terminology suggests that he will forge ahead with the mandate by mid-September, even without the full FDA approval for the injection.

Until the mandate is implemented, Secretary Austin writes that all unvaccinated service personnel will have to face additional restrictions, which their vaccinated colleagues will not, in accord with the presidential directives. “Those requirements apply to those of you in uniform as well as our civilian and contractor personnel,” he wrote.

However, he hinted at the promised vaccine mandate being implemented sooner, should he find cause for concern in the number of COVID-19 positive cases within the military. Referencing the infection rates from the Delta variant of the virus, Austin warned about the possible “impact these rates might have on our readiness.”

“I will not hesitate to act sooner or recommend a different course to the President if I feel the need to do so,” Austin said.

“To defend this Nation, we need a healthy and ready force,” Austin declared, before urging military personnel to take the experimental injection.

“I strongly encourage all DoD military and civilian personnel — as well as contractor personnel — to get vaccinated now and for military Service members to not wait for the mandate.”

Joe Biden wrote to “strongly support” Austin’s memo in a press release issued shortly afterward. “We are still on a wartime footing, and every American who is eligible should take immediate steps to get vaccinated right away,” Biden said.

The president accused the unvaccinated of spreading the virus “rapidly,” adding that “being vaccinated will enable our service members to stay healthy, to better protect their families, and to ensure that our force is ready to operate anywhere in the world.”

Attempting to defend his argument once more and encourage vaccine uptake, Austin wrote, “All FDA-authorized COVID-19 vaccines are safe and highly effective.” He was echoed by Biden, who stated, “These vaccines will save lives. Period. They are safe. They are effective.”

The Defender notes that of the number of adverse events, there were 70,105 reports of serious injuries, including deaths, with 121,452 reports of anaphylaxis.

Indeed, the number of breakthrough cases of COVID-19 in people who are fully injected continues to rise. One such recent example took place on a contained cruise liner with 4,000 fully vaccinated passengers, where there was reportedly an outbreak of the virus. The ship, Carnival Vista, has now implemented mask mandates for all passengers, apart from on the outer decks.

Some studies also suggest that the vaccinated group of Americans may in fact “play a key role in helping SARS-CoV-2 variants evolve into those that evade existing COVID vaccines.”

Meanwhile, just days ago 16 congressmen penned a letter to the Secretary of Defense appealing to Doe v. Rumsfeld and noting that “Mandatory vaccination is illegal for military personnel prior to complete approval.”

Led by Rep. Mark E. Green, MD, the signatories reminded Austin that any vaccine mandate before full FDA approval would be “an unprecedented violation of federal law.”

Scientist: Delta variant more transmissible, not more deadly
EXCLUSIVE – Former Pfizer VP: ‘Your government is lying to you in a way that could lead to your death.’
Doctors petition EU to stop all COVID vaccine studies due to grave risks
Former Pfizer VP: ‘No need for vaccines,’ ‘the pandemic is effectively over’
It’s ‘entirely possible’ vaccine campaigns ‘will be used for massive-scale depopulation’: Former Pfizer VP
Former Pfizer VP: Vax passports may lead to ‘totalitarian control’ of ‘entire population forever’