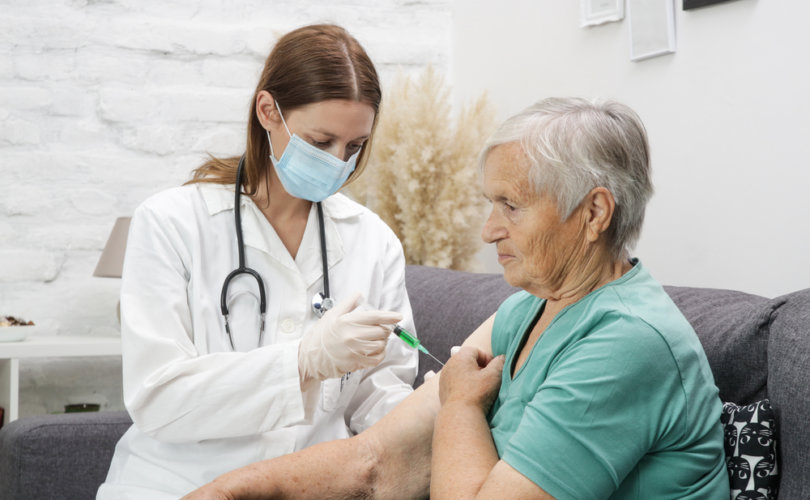 LONDON (LifeSiteNews) – Data from England’s public health policy department on the spread of coronavirus shows that 65 percent of hospitalizations and deaths involving COVID-19 are among those who have had at least one dose of the experimental jabs.

Public Health England (PHE) released a report on August 6 detailing the spread of the Delta variant of the virus, and includes hospitalizations and deaths where COVID-19 was a factor between February 1, 2021, and August 2, 2021.

The agency, which is scheduled to be amalgamated with the NHS Test and Trace program and become the U.K. Health Security Agency next month, outlined a total of 300,010 “confirmed and provisional Delta cases” of the virus in England. Of these “cases,” 151,054 were found among unvaccinated individuals, amounting to just over 50 percent, whereas 117,115 of those testing positive had received at least one dose of the anti-COVID jabs. A total of 31,841 individuals were marked as “unlinked,” as those “represent the number of sequences not present within the English surveillance system,” most likely originating from the administrations of the other British nations.

The vaccinated category is broken down into those who tested positive after having received one jab, both within 21 days of the shot and after the 21-day mark, and those who had received both shots.

Among the double jabbed, 47,008 tested positive, accounting for 15.7 percent of the 300,010 Delta infections. In all, 39.1 percent of Delta variant infections, which accounts for roughly 99 percent of all COVID infection in the U.K., and which were detected by testing, are attributable to those who had received at least one dose of experimental “vaccine” against the virus.

Though the unvaccinated category accounts for around half of overall Delta COVID infections in England, the rate of death in this group is actually lower than among those who received jabs against the virus, and hospitalization in the double jabbed outstripped that of unvaccinated individuals.

Among the unvaccinated, those who were admitted to a hospital numbered 2,960, which is 1.95 percent of infections in that group. Within the vaccinated group, aggregating all three subcategories shows a slight decrease in the rate of hospitalization, coming in at 1.8 percent.

However, taking the fully vaccinated group on its own, the PHE data show 1,355 of 47,008 identified infections were admitted to hospital, or 2.9 percent, meaning that the double jabbed face around a 49 percent greater chance of being hospitalized if they contract COVID-19 versus someone who has not been jabbed.

When analyzed according to the subcategories of vaccination, again the double jabbed stand out as being at increased risk of death if they catch the virus. So-called “fully vaccinated” individuals registered 0.85 percent dead within 28 days of a positive COVID test and among those hospitalized, some 29.7 percent had died.

This pits the double jabbed at an overall increased risk of death from catching the virus as five times more likely than those who did not receive the jab. If the “fully vaccinated” are hospitalized after testing positive for COVID, they stand a statistical chance of dying that is 3.5 times greater than that of unvaccinated individuals.

The inventor of the mRNA technology currently being widely implemented in jabs against COVID-19, Dr. Robert Malone, has voiced deep concern over the possibility that the shots could be driving the mortality rate of the COVID-19 virus upwards.

A CDC report published July 30 indicated that viral loads between the vaccinated and unvaccinated are likely “similar,” though “microbiological studies are required to confirm these findings,” the report reads.

Malone, who is also a licensed physician, receiving his medical training at Northwestern University, Harvard University medical school, and UC Davis, told Steve Bannon in an interview on his War Room: Pandemic show that an increased viral load in the vaccinated “is precisely what one would see if antibody dependent enhancement (ADE) was happening.”

Malone briefly explained that ADE is a type of virus strengthening process that can arise from certain types of vaccine, and that would otherwise not happen if the vaccine had not been used as an intervention. (See further ADE explanation here)

“This is the vaccinologist’s worst nightmare,” Malone explained. “It happened with the respiratory syncytial virus and in the ‘60s and caused more child deaths in vaccine recipients than unvaccinated. It happened with Dengvaxia, the dengue vaccine,” the scientist added.

In fact, Malone’s concerns can be seen in the case of Spain, which has aggressively upped its efforts to administer the COVID jabs to its roughly 47.5 million citizens. As things stand, around 70 percent of Spaniards have received their first dose of the “vaccine,” with 60.5 percent having received the full regimen, German news magazine FOCUS reported.

While the Constitutional Tribunal of Spain recently upheld a ruling that suspends mandatory vaccination against COVID-19, the country’s president, Pedro Sánchez, has been attempting to bring the jab to as many people as possible, delighting in the fact that the western European nation is “getting closer and closer to the goal of 70 percent of the population fully vaccinated.”

In spite of Spain’s rapid and widespread deployment of the shots, the country has seen one of the highest spikes in Europe recently regarding infection with the virus. At the end of June, there were roughly 125,000 “active infections,” but within one month that number had shot up to over 500,000.

As of August 9, there are 712,457 active infections, with 2,031 of those resulting in hospitalization, according to Worldometer. Reuters reported that over the same period of time the use of intensive care beds in Spanish hospitals dedicated to COVID patients also rose by about 0.4 percent.

The number of deaths of individuals testing positive for the virus did not increase by a similar proportion over the month of July. The daily rate of deaths remained somewhat stable throughout July but suddenly jumped between the last week of July and the first of August, when the rate almost doubled, going from 43 deaths per day to 75 per day during a seven-day moving average.