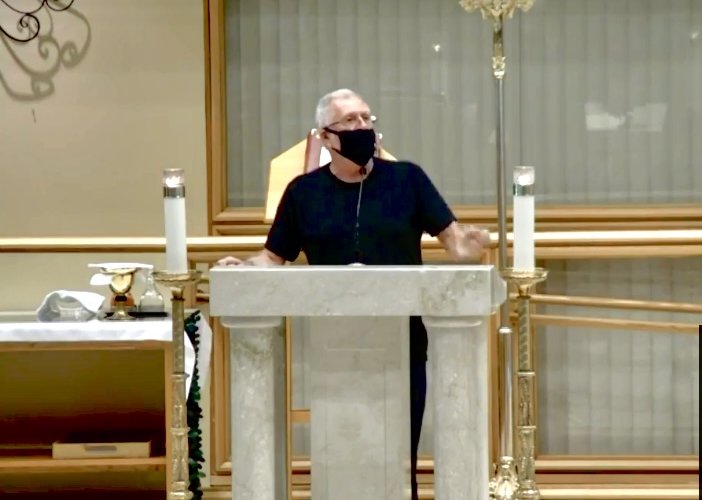 FORT MYERS, Florida (LifeSiteNews) — A Catholic priest took to the pulpit Sunday to berate parishioners for planning to protest the diocesan mask mandate for school children, threatening to deprive families of scholarships if they oppose the requirement.

After the final blessing during an August 8 Mass, Father Bob Tabbert, pastor of St. John XXIII Church in Fort Myers, told his parish, “I am not a very happy person today.”

Clad in a black t-shirt and slacks, Fr. Tabbert, who was not the celebrant at the Mass, also wore a black cloth mask for the duration of his address as he said he was “very unhappy and displeased by a number of parents from this parish and other parishes who are staging a protest in front of our Catholic schools tomorrow.”

The priest explained that “these individuals” who planned to engage in the protest did so “in light of the bishop’s decision regarding masks for children.”

The decision to revoke the optional mask policy and mandate facial coverings for schools in the Diocese of Venice — of which St. John XXIII is a part — was announced by Bishop Frank J. Dewane in a statement that argued it was necessary to mandate masks based upon “new data” indicating an 18% increase of COVID cases in Florida over the past week.

Bishop Dewane said that while he “respect[s] completely” the “issue of parental rights,” “the responsibility of each School [sic] is to ensure the safety of all students.”

According to the letter, parents may opt for online learning rather than in-person learning if they object to mandatory masking, and the mandate will be reviewed on a weekly basis.

The mandate applies to private schools within the diocese and therefore does not legally run afoul of Florida Gov. Ron DeSantis’ recent executive order forbidding public schools from mandating that children wear masks.

In his Sunday homily, Fr. Tabbert defended the bishop’s mandate, saying he has two grand-nieces, ages 5 and 4, who attend a parish school and he doesn’t “want anything to ever happen to them with this COVID virus, nor any one of our children from any parish from this whole community.”

Tabbert argued that “this virus does not discriminate.”

However the coronavirus has been shown to cause the most severe illness in those over age 65 and those with significant pre-existing conditions, with younger people at substantially lower risk of illness, hospitalization, or death.

Studies have routinely shown that children diagnosed with COVID-19 are most commonly asymptomatic or only suffer minor symptoms.

Multiple studies have shown the ineffectiveness of masks in preventing COVID transmission and infection, while both the physical and psychological impact of forcing children to wear masks is a major and growing concern.

However, reports that the Delta variant has caused more hospitalizations for children has led to a return to mask mandates and other policies such as the one enacted by the Diocese of Venice.

As reported by the News-Press, John J. Heck, who is the father of an incoming freshman student at Bishop Verot High School in Fort Myers, said the bishop’s mandate came as a surprise, announced just days before classes were set to begin Monday.

“This got dumped on us Thursday night at 8:30,” Heck said, noting that like-minded parents planned to protest the policy at the high school and other diocesan schools on Monday morning.

In an email address to the diocese that was provided to the news outlet, Heck said, “[a]s parents, we made the mistake last year of allowing our children to be masked, quarantined and isolated. There have been very real consequences to that decision for many of us. We were told then, ‘2 weeks to flatten the curve.’ Words that ring eerily similar to the language you have used in this matter. Here we are a year and a half later.”

“Some of us have made decisions to send our children to your schools for the first time, at enormous cost and personal sacrifice,” Heck’s email continued. “Other families have decided to return to your schools largely, in part, due to assurances and reassurances received from your school officials regarding the individual liberty and family choice to wear a mask or not.”

Writing on the diocese’s Facebook page, another concerned parent, Carla Trombly, said, “I will NOT be sending my daughter to school with a mask on Monday. In Florida, we have … Parental rights to make medical decisions for our children. I will not allow the DOV to take away my rights as a parent.”

But Tabbert told those in his parish considering participating in the protests: “don’t do it,” threatening to withhold tuition assistance from those who object to the mandate.

“Some individuals may choose to protest tomorrow,” Tabbert said, “[a]nd some of them may be the ones that are recipients of tuition assistance. Well, you know what? If you protest tomorrow, don’t ask me for assistance tomorrow afternoon.”

The priest accused the protesters of causing division in “the Catholic Church in this community” and “feeding into the news media.”

“So, folks, don’t get me upset,” Tabbert warned, shaking his finger at those in attendance.

“If you know other individuals who are planning this protest in front of St. Francis, or Bishop Verot, or St. Andrew’s, you’re feeding into the news media, and what you’re dividing is the Catholic Church in this community. Don’t do that. It’s wrong.”

After threatening to withhold scholarships from families vocally opposing the mask mandate, Fr. Tabbert then quoted St. Paul, saying, “‘be kind to one another, compassionate, forgiving one another, as God has forgiven you in Christ. Be imitators of God.’”

“There is a way to protest,” Tabbert acknowledged, but said that “[p]rotesting in front of a school, with signs and going after other parents and so forth, is not the way. There is a proper way of dialogue.”

It is unclear what type of protest Tabbert would support. He went on to lambast two families who sent emails indicating their displeasure with the policy, telling him they were withdrawing their children from school and ceasing to attend parish functions or financially support the parish.

“I had one particular person send an email yesterday to me, saying they were going to withdraw from St. Francis School because of this,” he said. “So, they said they’re taking their two kids out. Another said they’re not going to participate in any parish ministry, ‘we’re not going to support the parish financially.’ Well you know what my response to them is? Guess what? There are two others that will be in line for St. Francis School on Tuesday.”

Fr. Tabbert then doubled down on his admonitions, using crass language to urge parents not to participate in the protest against mandatory masks.

“Folks, if you’re a part of that group, who want to protest tomorrow, don’t do it. And listen to me. I will be so pissed off if I hear that you have done it. Don’t do it. There is not a way to protest. I’m done.”