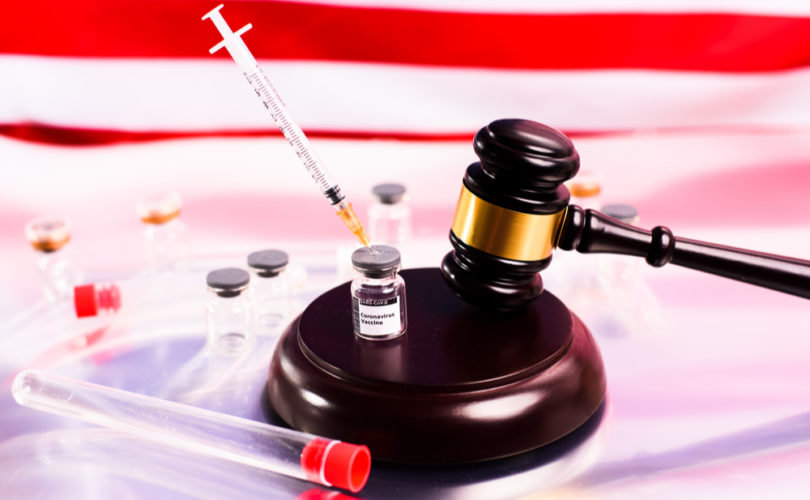 OTTAWA, Ontario (LifeSiteNews) – Canadian Prime Minister Justin Trudeau said his government will support businesses scared of being sued for asking people to be jabbed as a condition of work.

“We’ve simply said that we will be there, to have those businesses’ back as they do the right thing. There are a number of different ways that the Justice Department is looking at ensuring that they do not have to fear being sued for demanding that people be vaccinated,” Trudeau said Monday while campaigning in Welland for the September 20 federal election.

“But we will make sure that we’re helping them know that they’re doing the right thing and know that we’ll have their backs as they do it, following up.”

The Liberal Party of Canada’s 2021 election party platform contains a promise to allow employers to mandate proof of COVID-19 vaccination without fear of a “legal challenge.”

“A re-elected Liberal government will Table legislation to ensure that every business and organization that decides to require a proof of vaccination from employees and customers can do so without fear of a legal challenge,” reads a portion of the 86-page “Forward for Everyone” 2021 Liberal election campaign platform.

Under a section titled “A Vaccine Strategy to Save Lives,” the Liberals’ platform also mentions that they will commit to offering free “COVID-19 Vaccine Boosters as the public health situation evolves.”

The Liberal Party platform reaffirms an earlier mentioned announcement by Trudeau that COVID-19 jabs will be required throughout Canada starting in October to travel domestically by air, train or boat.

Trudeau’s Liberal Party platform also contains a section titled “Proof of Vaccination,” which he has pledged to push for with Canada’s provinces.

“Proof of vaccination systems give people the confidence of knowing that others around them are fully vaccinated. They also help drive increased vaccination rates and give Canadians confidence that it’s safe to go to restaurants, shops, and out into their communities,” the platform reads.

“A re-elected Liberal government will: Launch a $1 billion COVID-19 Proof of Vaccination Fund to support provinces and territories who implement a requirement for proof of vaccine credentials in their jurisdiction for non-essential businesses and public spaces.”

According to Canada Immigration Minister Marco Mendicino, a vaccine passport will be “a key step forward in ensuring Canadians will have the documents they need once it is safe to travel again.”

Jay Cameron, litigation director for the Justice Centre for Constitutional Freedoms (JCCF), told LifeSiteNews that all Canadians must have “recourse to the courts of justice.”

“Attempting to prevent some Canadians based on their vaccination status from accessing courts and human rights tribunals is an attack on the rule of law,” Cameron said. “Employees have contracts with their employers, and they are entitled to apply to enforce those contracts against their employers if the terms of the contract are breached.”

“Terminating the employment of employees who do not get the experimental COVID shot is a constructive dismissal and a breach of contract unless the contract specifically contains such a term. Preventing Canadians who are discriminated against on the basis of their vaccination status or their religious beliefs from applying for redress to a human rights tribunal is a gross and reprehensible interference with human rights laws.”

Manitoba and Quebec are the two Canadian provinces with vaccine passports in effect. British Columbia is implementing one starting September 13 and Ontario is rolling out one on September 22.

Alberta Premier Jason Kenney recently went on a rant against the “unvaccinated,” directly blaming them for a rise in “Delta” cases of the virus in his province.

Health Canada has authorized four COVID-19 injections for adults, all with connections to cells derived from aborted babies. All four have also been associated with severe side effects such as blood clots, rashes, miscarriages, heart attacks in young, healthy men, and death.

A recent Public Health England technical briefing showed that about two-thirds of those who have died with the COVID-19 Delta variant in the United Kingdom had both doses of the COVID-19 jabs.