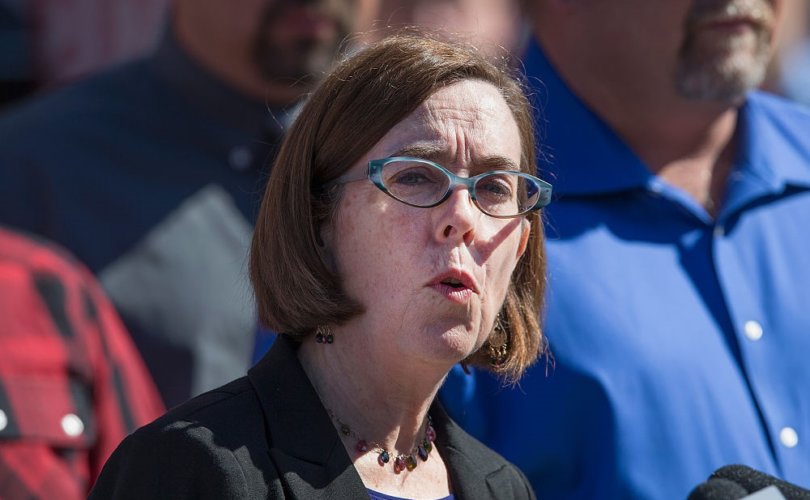 (LifeSiteNews) — In what is shaping up to be a national trend of frontline emergency personnel fighting against COVID-19 injection mandates, firefighters and law enforcement officers in Oregon have banded together to sue the governor for requiring state employees to get the abortion-tainted jab.

A major police union, a southern Oregon firefighters’ union, and nine individual law enforcement officers are the plaintiffs in the lawsuit, which names Democrat Gov. Kate Brown and the state of Oregon as defendants.

The groups and individuals are suing Gov. Brown for an executive order she issued last month mandating COVID-19 shots for “executive branch employees” on the grounds that the order is “unenforceable” and “unconstitutional.”

The lawsuit, filed with the Jefferson County Circuit Court, asks the judge to issue a declaratory judgment affirming its claims.

“Collectively, as a team, we respectfully stand in firm opposition of this vaccine mandate,” wrote the Kingsley Firefighters Association in a statement.

While noting that “[a]s first responders we can attest to the many challenges this pandemic has brought on,” the union, which is a Southern Oregon branch of the International Association of Firefighters (IAFF), said its members “believe in bodily autonomy, civil liberties, and a person’s individual right to make their own medical decisions.

“This is government overreach which violates Oregon law, the Oregon Constitution, and the Federal Constitution,” said the Oregon Fraternal Order of Police on their website.

“We cannot allow this executive order to go unchallenged.”

IAFF Local 3340, the Kingsley Fire Fighters Association, said that they strongly stand in agreement with “not only our sisters and brothers, but all public service employees that believe in the individual’s ‘right to choose.'” https://t.co/AeElKgiMrZ

The news comes as hundreds of Los Angeles firefighters and police officers announced earlier this month they were joining forces to take legal action against L.A.’s jab mandate, which compels the roughly 60,000 city employees to become “fully vaccinated” by October 5.

Granucci was placed under investigation by his department for his comments.

North of California, the Oregon emergency response personnel taking legal action to oppose vaccine mandates include the Oregon Fraternal Order of Police, the Kingsley Firefighters Association, as well as troopers with the Oregon State Police, a state police captain, and a Major Crimes Sergeant.

The announcement of the Oregon groups’ legal action came after Oregon State Police trooper Zachary Kowing posted an Instagram video in which he blasted Gov. Brown and said he would not obey her injection mandate.

29-yr-old Oregon State Trooper Zachary Kowing is placed on paid leave for making powerful video explaining why he will not be bullied into taking the mandated vaccine: “I swore an oath to uphold the Constitution…I do not work for the governor!” pic.twitter.com/hxZgqikIgM

“I’m a Christian, a husband, a father, and a police officer. I swore an oath to uphold the Constitution of the United States, to protect the freedom of the people who pay my salary. I do not work for my governor but for them,” Kowing said in the video, adding that he has “personal and religious reasons as to why I will not take the vaccine, as well as the freedom to choose not to.”

Like Capt. Granucci in Los Angeles, Kowing is now under investigation for his statements. He is being legally represented by attorney Dan Thenell.

Thenell’s law group is also representing the Oregon unions, troopers, and firefighters in their separate lawsuit against Gov. Brown and the state of Oregon.

The lawsuit takes aim at Executive Order Number 21-29 handed down by Gov. Brown on August 13, whereby all “executive branch employees” (which includes law enforcement and firefighters) must submit to getting the COVID shot by October 18 or face termination of employment.

According to the filing, “The individual plaintiffs are executive branch employees as defined in EO No. 21-29 who want to exercise control over their own medical treatment and are being forced to choose between their rights privileges and liberties as citizens on the one hand and their employment, careers, and financial futures on the other.”

As mentioned in the suit, according to existing Oregon law (ORS 433.416), no “worker” may be required to be “immunized” as a condition of employment unless the requirement is authorized by federal or state law, rule or regulation.

The lawsuit notes that “[t]he Oregon Legislature has enacted no law authorizing vaccinations of workers.”

Arguing that Gov. Brown has, through her allegedly “unenforceable” and “unconstitutional” executive order, placed all affected employees “in an untenable situation,” the lawsuit argued that “forcing them to decide between their livelihoods and vindicating their statutory and constitutional rights is unconscionable and wrong.”

In a 2008 document, the American Civil Liberties Union (ACLU) warned against overly aggressive and coercive pandemic response measures, arguing that “the notion that we need to ‘trade liberty for security’ is misguided and dangerous.”

Slamming the the U.S. Department of Health and Human Service’s Pandemic Influenza Plan at the time, the ACLU criticized any effort that “calls for massive uses of government force, for example to ban public gatherings, isolate symptomatic individuals, restrict the movement of individuals, or compel vaccination or treatment.”

“If we allow the fear associated with a potential outbreak to justify the suspension of liberties in the name of public health, we risk not only undermining our fundamental rights, but alienating the very communities and individuals that are in need of help and thereby fomenting the spread of disease,” the group claimed.

The ACLU, which bills itself as “the nation’s guardian of liberty,” has subsequently shifted its stance during the COVID-19 response, coming out strongly in favor of forced vaccination.

In a New York Times op-ed published this month, the group argued that “Avoiding a deadly threat to the public health typically outweighs personal autonomy and individual freedom.”

But the first responders in Oregon, whose professional duty is defending the lives of the public, disagree.

According to the Kingsley Firefighters’ Association, “This mandate sets a dangerous precedent and should be concerning to all. Our collective opposition to this mandate is not about politics, COVID-19, or a vaccine itself. It’s about stripping individuals of a basic American freedom, our right as individuals to make personal medical choices.”

LifeSiteNews reached out to Gov. Brown’s press office for comment but has yet to hear back. Last week, the governor’s press secretary, Liz Merah, told NewsChannel 21, “Our office generally does not comment on matters of pending litigation.”