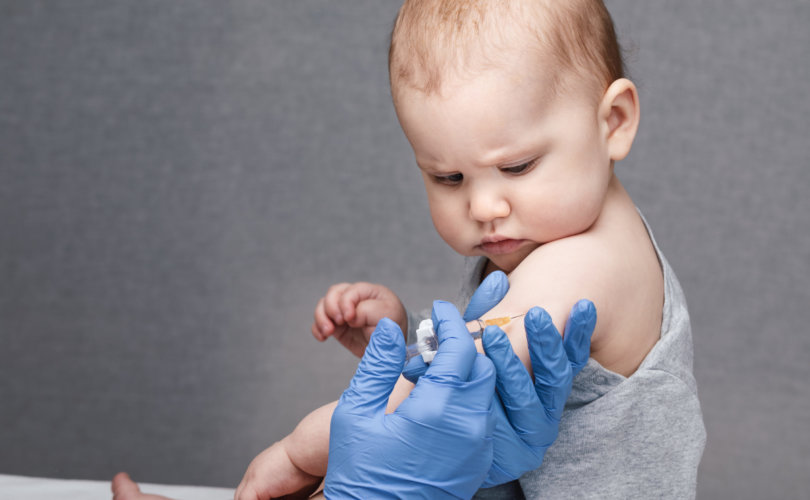 (LifeSiteNews) — Infants as young as six months old may soon be eligible for the abortion-tainted COVID-19 shot if BioNTech receives approval for the jab it developed in collaboration with Pfizer.

Just weeks after the Food and Drug Administration (FDA) approved the two-dose mRNA Pfizer/BioNTech shot for all Americans age 16 and up, the two top executives of German biotechnology company BioNTech announced that they are seeking approval of the drugs from global regulators for use in children age five and up in the next several weeks.

This comes in spite of the fact that the Pfizer jab has still not been fully approved for children ages 12 to 15, for which it still maintains an Emergency Use Authorization (EUA).

As reported by Reuters on Friday, “BioNTech has said it expected to file its regulatory dossier on the five- to 11-year-olds in September. It has also laid out plans to seek approval in children aged 6 months to two years later this year.”

It is unclear why the three- to four-year-old age group appears to have been left out of the calculation.

“Already over the next few weeks we will file the results of our trial in five- to 11-year-olds with regulators across the world and will request approval of the vaccine in this age group, also here in Europe,” BioNTech Chief Medical Officer Oezlem Tuereci said.

The biotech company is angling to get the green-light to launch the jab for young children by October, and younger age groups before the end of the year.

Pfizer is not alone in seeking to widen its demographic net for COVID-19 shots.

As reported by Reuters, fellow mRNA COVID-19 shot producer Moderna announced Thursday that it is testing its jabs for children age six to 11 and working on another study in which parents have volunteered infants as young as six months old to participate in the testing of the drug.

The news comes as Pfizer/BioNTech and Moderna were forced to add a risk of heart inflammation to the fact sheets for their COVID-19 drugs in June, in response to 1,200 reported cases of myocarditis or pericarditis after vaccination, a large percentage of which were reported in young males under age 30.

A University of California-led study published Wednesday, which has not yet undergone peer review, found that for teenage boys the risk of myocarditis after getting a COVID shot was far higher than the risk posed by contracting COVID-19.

As summarized by The Spectator, “[o]ver a 120-day period, the study found that boys between 12 and 15 had a risk of cardiac issues that was four to six times as high as the risk of being hospitalized with Covid-19.”

While vaccination has been shown to cause some severe reactions in children and young adults, COVID-19 itself has been consistently shown to have a statistically minor impact on young children, with risks associated with the virus consistent with typical risk from standard flu strains.

Some data have indicated that COVID-19 may actually be milder for children than the seasonal flu.

A June study found that “COVID-19 disease has a milder clinical and laboratory course than Influenza in children.”

Additionally, it is likely that many children have already contracted COVID-19 over the past year and a half and developed natural immunity.

Peter Doshi, Ph.D., associate professor at the University of Maryland School of Pharmacy and senior editor of The British Medical Journal, cited data from the Centers for Disease Control and Prevention (CDC) which, as of June 10, showed that 23% of 0- to 4-year-olds and 42% of 5- to 17-year-olds already have robust natural immunity from having contracted and recovered from COVID-19 without having gotten the injection.

Meanwhile, public health experts, including Dr. Anthony Fauci, have admitted that “fully vaccinated” people carry at least the same “viral load” as unvaccinated people, throwing doubt on the claim that children and others at low risk from the virus must get the shot to protect others.

Regardless, moves to vaccinate younger and younger children are underway, and not just by the pharmaceutical companies producing the drugs.

At a special meeting on Thursday, the Los Angeles Unified School Board voted 6-0 to require all eligible children age 12 and older attending district schools to get the COVID-19 shots by the end of the year, CNN reported Thursday, regardless of the fact that none of the COVID-19 concoctions currently on the market have full FDA approval for children under 16.

The school district, the second largest in the nation, will force hundreds of thousands of students to get their first jab no later than November 21 and become “fully vaccinated” by December 19.

“Students who participate in in-person extracurricular activities, including sports, face an earlier deadline of October 3 for a first dose of the vaccine and a second dose no later than October 31,” the report read.

It is about the access,” board member Tanya Ortiz Franklin told CNN, saying that the lack of full FDA approval did not bother the school board.

“We understand the benefits far outweigh the risks, and so the emergency authorization really isn’t weighing into our decision,” she said.

Writing for The Spectator, columnist Ross Clark questioned the wisdom of inoculating children and young people who are at low risk of the virus and, according to studies, higher risk of side effects from the shots.

“[W]hile older people are far more likely to suffer serious harm from Covid-19, it is younger people who seem to suffer the brunt of the serious side effects so far identified,” he said.