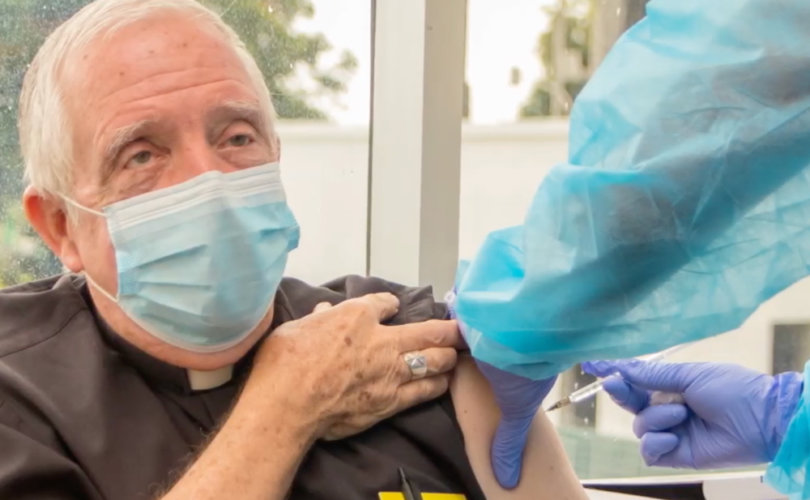 GEORGETOWN, Guyana (LifeSiteNews) – In a somewhat bizarre twist of events, the Catholic bishop of Guyana has closed his churches and is offering Mass online rather than enforce entry via vaccine passports that he said would force “many” to be unable to attend church due to not being injected.

Bishop Francis Alleyne, OSB, bishop of Georgetown in Guyana, issued a letter September 9 in response to the recent COVID-19 related restrictions in the country. The national restrictions stipulate that people will now have to be “vaccinated” and prove it in order to enter public buildings, including places of worship.

Such an order “means that many of our brothers and sisters, at this time, will not be allowed entry into our churches,” Bishop Alleyne wrote. “We ought not to leave part of the body detached from the whole.”

“Therefore, in solidarity with these brothers and sisters, and beginning on Friday 10th September, we will conduct all our worship virtually and refrain from gathering in any number. Our churches will be closed for public worship until further notice.”

Despite not wishing to currently ostracize a certain part of the Catholic faithful, the 69-year-old Alleyne did not appear to be against the use of vaccine passports as a rule, noting that the “severe threat of the pandemic and the increasing numbers of infections and deaths warrants strong measures and this asks of us, not only that we comply with reliable scientific guidance but out of our Christian conviction, to go beyond the call and act in favour of the common good to the extent that it is necessary and involves sacrifice.”

Commending the faithful for being “vigilant” in adhering to the restrictive measures, the bishop declared that “the threat has become more intense and we have to ask ourselves ‘what more must we do?’”

“The official teaching of the Church is that we would all access a vaccine and remain vigilant,” he said, while stating that this would lead to “herd immunity,” a concept he defined as “when a high percentage of the population (80%) has been vaccinated it becomes extremely difficult for the virus to spread.”

Alleyne then called upon those who had not received the injection to “reconsider your decision” and “act in the interest of the common good and to do your part in safeguarding the well-being of all.”

Alleyne’s referencing of herd immunity appears to be based on the update description of the term late in 2020, when the World Health Organization drastically altered the term to mean when the “vast majority of a population are vaccinated.” The previous definition had referred to herd immunity as “indirect protection from an infectious disease that happens when a population is immune either through vaccination or immunity developed through previous infection.”

While appearing to have closed churches until enough of the faithful received the injection, meaning that the use of a vaccine passport would not be a major issue, Alleyne only selectively referred to the controversial December 2020 note by the Congregation for the Doctrine of the Faith regarding vaccination for COVID-19.

The note defended using abortion-tainted COVID-19 injections under specific limited circumstances, yet specified that the choice to do so must always remain “voluntary.” Indeed, as stated by the U.S. National Catholic Bioethics Center, especially since the long-term effects of these vaccines have not been sufficiently tested, “coercive measures requiring persons” to take such a vaccine are “ethically unacceptable.”

It is as yet unclear whether Alleyne will keep his churches closed for public worship as an incentive to those in his diocese to take the injection.

He received his own COVID-19 injection earlier this year.

Bishop Alleyne’s vaccine push comes in stark opposition to a number of his prominent brother clergy. In a paper released December 12, 2020, Bishop Athanasius Schneider, along with co-signers Cardinal Janis Pujats, Bishop Joseph Strickland, and Archbishops Tomash Peta and Jan Pawel Lenga, expressed the strong conviction that any use of a vaccine tainted with the “unspeakable crime” of abortion, under any circumstances, “cannot be acceptable for Catholics.”

“The crime of abortion is so monstrous that any kind of concatenation with this crime, even a very remote one, is immoral and cannot be accepted under any circumstances by a Catholic once he has become fully aware of it,” they wrote. “One who uses these vaccines must realize that his body is benefiting from the ‘fruits’ … of one of mankind’s greatest crimes.”

Bishop Alleyne is also in opposition to Cardinal Raymond Burke, former Prefect of the Supreme Tribunal of the Apostolic Signatura who previously spoke out against vaccines using aborted babies, saying, “It must be clear that it is never morally justified to develop a vaccine through the use of the cell lines of aborted fetuses.”

As of September 6, Guyana government statistics state that 320,747 people (62.5% of the country’s adult population) had received the first dose of a COVID-19 vaccine, and 168,201 or 32.8 percent of the adult population had received two doses. An additional 9,909 under 18 had taken Pfizer/BioNTech’s injection.

Promoting the vaccine, Dr. Frank Anthony, the country’s Minister of Health, declared that “almost 99 percent” of those in hospital with COVID-19 “are unvaccinated and most of them were in the ICU are also unvaccinated.”

However, others with due competence have come to the opposite conclusion, stating even in December that the “pandemic” is effectively “over.” Ex-Pfizer vice president, Dr. Michael Yeadon echoed this by saying that vaccines are not needed at all for this virus and more recently warning that it is “entirely possible” vaccine campaigns “will be used for massive-scale depopulation.”