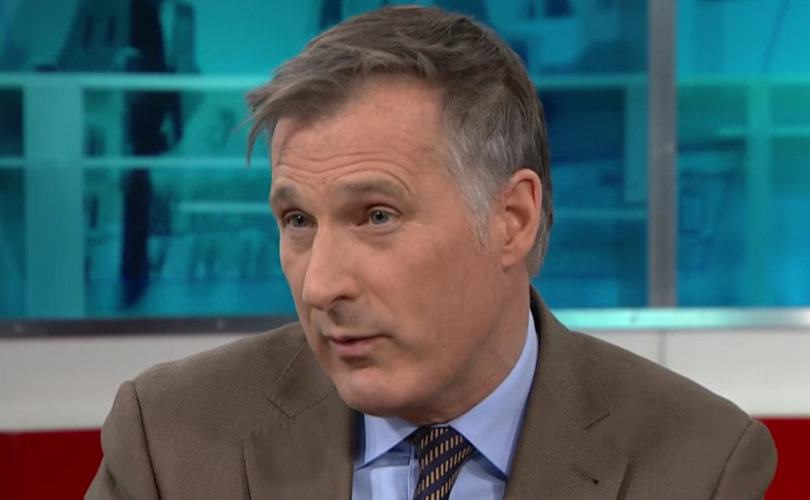 (LifeSiteNews) – People’s Party of Canada leader Maxime Bernier called the Canadian Association of Journalists (CAJ) “despicable bullies” for asking police to investigate him for a negative tweet about the group.

“These leftist activists masquerading as journalists are the ones who have been harassing us for years with their offensive questions,” Bernier told LifeSiteNews. “They are despicable bullies. They’re the ones who should be investigated.”

Bernier wrote last week on Twitter, “If you want to write to these idiots to tell them what you think of their disgusting smear jobs, here are their email addresses. They want to play dirty, we will play dirty too.”

The CAJ yesterday said Bernier’s tweet from last week calling them “idiots” was a form of “targeted harassment” and that police should investigate him.

“The CAJ is mindful that several sections of the Criminal Code prohibit the willful promotion of hatred. For this reason, we urge the RCMP, and other law enforcement bodies, to launch investigations immediately,” in a press release yesterday.

According to the CAJ, as a result of Bernier’s tweet, “dozens more reporters, many of whom are female and/or journalists of colour, have been inundated with intimidating emails and messages on social media with threats of violence, sexual assault, harassment, and death.”

However, Martin Masse, spokesperson for the PPC, told LifeSiteNews that the CAJ allegations are “completely bogus” and that there was nothing “hateful” in Bernier’s tweet.

“He simply asked his supporters to write to these journalists and tell them what they think of their disgusting loaded questions implying that PPC supporters are violent Neo-Nazis. Their email addresses are publicly available in their Twitter bio in the case of two of them, and on her CTV bio page for the other one,” Masse told LifeSiteNews.

Masse said that instead of “attacking us” the CAJ should try to raise the quality of “journalism in this country and promote ethical and professional standards among its members.”

According to Masse, some of the CAJ members who work in mainstream legacy media are the ones “promoting hatred against hundreds of thousands of PPC supporters.”

Masse said that while on the campaign trail, many PPC candidates were targeted with hate.

“Because of the offensive lies that they keep publishing about us, many of our candidates (including Jews, and men and women of colour) were verbally attacked and called Neo-Nazis while canvassing, and their signs destroyed, during the election campaigns in 2019 and again this year,” Masse told LifeSiteNews.

According to a CTV News report, the reporters who had their email addresses published on Twitter had asked Bernier why the PPC endorses “white nationalist groups” and “and whether it tolerates potential acts of hate by supporters on the campaign trail.”

Masse said last week that those claims are “horrendously offensive and simply false.”

“We get such emails on a regular basis,” Masse told LifeSiteNews. “It’s also very disingenuous of these journalists to turn around and say we are harassing them.”

The People’s Party of Canada, while not winning any seats, almost quadrupled its vote total from the 2019 election. The party won 5 percent of the popular vote, according to Elections Canada.

Bernier ran a campaign on freedom, fighting against vaccine passports, mandates, and masks, as well as government overreach. He was the only party leader to do so.

O’Toole ran a campaign that swayed left and routinely brought up the fact that he was “pro-choice,” which irked many CPC social conservative voters.