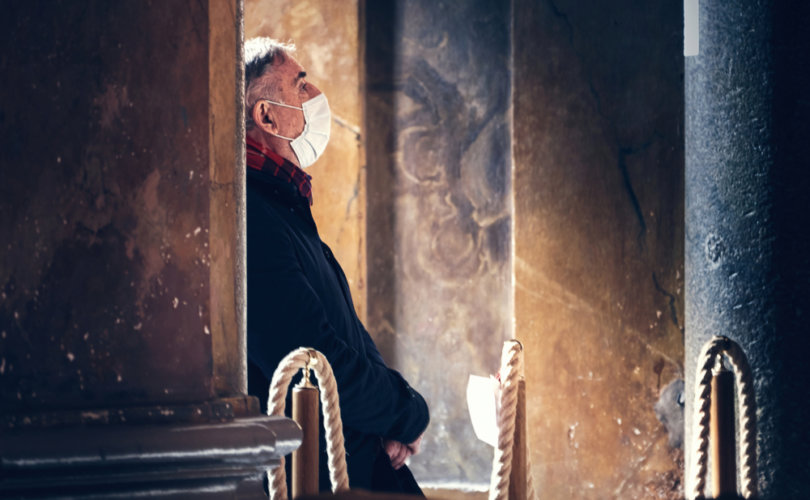 A priest prays in an empty French church.Shutterstock

(LifeSiteNews) — A 2,500-page report about sex abuse of minors and vulnerable persons in the Catholic Church of France to be made public Tuesday is expected to trigger an “earthquake,” as members of the independent commission, tasked by the French Bishops’ Conference and the Conference of French Religious with assessing the extent of the damage, are speaking to the press of a possible “100,000” victims between 1950 and the present day.

The report mentions 10,000 victims. Approximately 6,400 actually came forward to tell their stories to the Commission; 1,600 are said to have answered lengthy online questionnaires.

Some of their experiences were so shocking that Commission president Jean-Marc Sauve sought psychological help during his  mission, according to Marie-Jo Thiel, a doctor and theologian, member of the Commission and a longtime researcher on sex abuse on the part of priests and religious.

At Sunday Masses, the faithful were invited to pray for the victims whose stories have come to light and for the Church.

Sauvé has already revealed that some 3,000 priests and religious are involved over a 70-year period out of a total of about 115,000 Catholic priests based on victims’ testimonies and research in diocesan archives made available to the investigators by bishops. Judiciary archives were also examined.

Assessments of the number of victims were also made through a public survey of 28,000 adults whose findings were then extrapolated.

More than 2 ½ years of research by the “Commission indépendante sur les abus sexuels dans l’Eglise” (CIASE, Independent Commission on Sexual Abuse in the Church) have led to findings that are being presented in the media as a “tsunami.” Accusations of “systemic” abuse in the Church and a “systemic” incapability of “listening” to victims are being repeated in all of the mainstream media.

Archbishop Eric de Moulins-Beaufort, president of the Bishops Conference, stated last week that the extent of the sexual crimes in the Church was “greater than might have been feared.”

“For us priests, bishops, the first reaction must not be to brace ourselves or to dispute this,” he said. “There is a fact. We must accept it. There is something very brutal that we must dare to listen to, and to face. The first to suffer are the people who are victims. What I would like is that for them there should be an atmosphere that means that (…) if they speak, they will be listened to.”

As the Church hierarchy in France holds its breath – a message sent to all French parishes over the weekend warned that the report’s publication will be a “test of truth and a harsh and sober moment” – the way priests will be viewed by the general population is expected to become difficult to endure. An increasing proportion of the population no longer identifies as Catholic or even as having religious beliefs, and regular church attendance is down to under 5 percent. The Commission’s findings will not help.

The main grievance against the Church is that, until the 1990s, silence was the rule (as it also was in other parts of society, however). Victims were either not believed or, when the truth of their allegations had been established, offending priests were simply moved away to another parish or function with the hope that they would mend their ways. Victims – and their parents – were often asked to remain silent in the interests of the Church.

In recent years – especially since Cardinal Joseph Ratzinger, later Pope Benedict XVI took hold of the problem in the 1990s – sanctions have been more radical and severe, with abusing priests being reduced to the lay state.

The largest proportion of these crimes of sexual abuse (not “pedophilia,” Thiel insists, because although a number involve young children, there are numerous adolescent victims) took place in the 1950s and 1960s. Last November, Sauvé also noted that “systemic abuse” had taken place in a “small number of institutions and congregations.” In March, he underscored the fact that victims of clerical abuse were mainly male, in contrast with society at large.

It will be interesting to find out whether the report has something to say about the “homosexual” abuse of adolescent boys. It is also interesting to note that revelations made prior to the publication of the CIASE report say one-half of identified abusers were themselves abused when they were young.

If the numbers mentioned in the report are correct, another central question should be addressed. Was it the run-up to the revolution of May 1968 and its pleas for total sexual liberty, as well as the modernist revolution inside the Church that was smoldering beneath the surface before the Second Vatican Council and that erupted in the 1960s, that led to high numbers of abuse? This was a decade when outright pedophilia could be touted by writers and activists in avant-garde media programs in France without provoking shocked reactions.

Why did the French bishops decide to pay a Commission to publish what promises to be a very damning report on the Catholic Church? In the interests of truth and justice, and in the interests of the rights victims whose lives have been badly hurt (even to the point of suicide, in some cases), this is the obvious answer.

But there are other forces at work. It is already being said that, according to the CIASE report, the Church must change its “governance.” In Germany, it was the clerical sex abuse that led to the (heretical) synodal path upon which the Catholic Church has embarked, with “clericalism” identified as one of the main causes of abuse. This condemnation of “clericalism” as being at the root of the horrible misconduct of some priests is also a recurring element in Pope Francis’ assessments of the situation.

One journalist who testified to the Sauvé Commission, “La Croix” editor-in-chief Isabelle de Gaulmyn, put in a nutshell the revolutionary potential of the sex abuse crisis in the Church. She told the CIASE, in a bid to discredit Pope Benedict’s identification of the spirit of May 1968 as responsible for the large number of cases of abuse in the 1960s and 70s:

“In the Church, there is a culture of abuse, a system of abusers, much more than individuals who have been protected, which has corrupted the Church. We also need to work on theology; the link between power and the sacred raises questions for me, because it is likely to become a hold. (…) in the Catholic religion, there are things that favor this kind of drift, that is the analogy between the priest and Christ, the priest to whom one attributes a sacred power, the fact that there are  no safeguards in the control of power, a patriarchal system that has not evolved – which can be revealed by the use of the expression “mon père” (“My Father”), and the management of sexuality in the Church.

“In this respect, Benedict XVI sees May ’68 as the cause of the evils of the present-day Church, but the truth is rather the opposite: the Church is not the cause of the evils of the past. The truth would be rather the opposite: the Church has unfortunately been unable to draw the consequences of May ’68. Historians say that there has been an obsession with sexuality since the 19th century which has allowed the Church to recover the power that it lost with the Enlightenment, and which passes by the idealization of the virginity of Mary. This has often made me uncomfortable, as well as the discourse on remarried divorcees, who can receive communion if they don’t have sexual relation. The Church asks them to live ‘as brother and sister.’ This is incestuous! The clash between sexuality and purity is bizarre.”

Such accusations that attack both the sacredness of priesthood (which is one of the reasons why sex abuse on the part of priests is so heinous) and the Church’s glorification of the virginity of the Blessed Mother of God (which dates to the beginnings and the Gospel of St. Luke) give an idea of the work of demolition that is afoot.