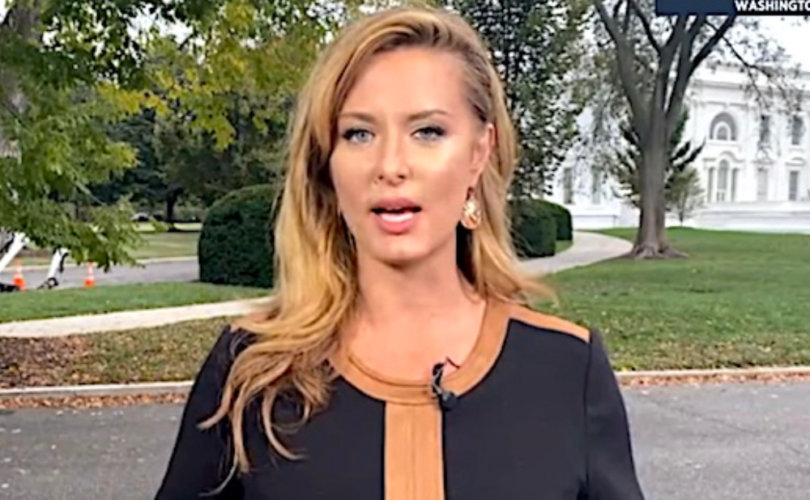 (WND News Center) – Journalists at one news agency have become embroiled in piercing controversy over reports of a company-imposed vaccine mandate and claims by its White House correspondent the COVID shot contains a satanic marker allowing people to be tracked.

On Friday, Newsmax anchor Steve Cortes indicated he would defy the COVID-vaccine mandate his own company purportedly issued the previous day.

“I will not comply w/ any organization’s attempt to enforce Biden’s capricious & unscientific Medical Apartheid mandate. I will not be forced into the injection, nor will I disclose my vaccination status,” Cortes tweeted late Friday.

“No one should be pressured to choose between medical privacy & their job.”

I will not comply w/ any organization’s attempt to enforce Biden’s capricious & unscientific Medical Apartheid mandate.

I will not be forced into the injection, nor will I disclose my vaccination status.

No one should be pressured to choose between medical privacy & their job.

Employees were informed of the new inoculation policy in a staff-wide e-mail Thursday, according to Mediaite.

The news outlet is reportedly ordering all workers to be fully vaccinated by Jan. 4, 2022, or face a weekly COVID test.

“To ensure that we are in compliance, we require that all vaccinated employees submit a copy of their vaccination card,” the email stated.

While on air Thursday night, Cortes blasted mandates as an example of “dictatorial rule” under President Joe Biden.

Cortes said: “There is zero, and I mean zero, moral or ethical obligation for anyone to be compelled to get vaccinated,” adding mandates are “insane workplace discrimination.”

On Sunday, Newsmax denied it is forcing employees to get the COVID shot.

“Newsmax has no vaccine mandate nor do we require it for employment,” it wrote in an editorial in which it called the rule “a dangerous overreach of federal power and opposed by Newsmax.”

It says the company “informed our staff of the upcoming federal rule. At the same time, we have notified staff we will create an easy opt-out for any employee who does not want to be vaccinated.”

“Under the rule, any employee who is not vaccinated will be tested for COVID on a weekly basis,” the editorial explained, noting, “Newsmax is going beyond the OSHA rule to provide free weekly testing on its company premises.”

Earlier in the week, Newsmax yanked its own White House correspondent Emerald Robinson off the air, at least temporarily, after she tweeted a warning to Christians about a substance in the Moderna COVID vaccine that she believes can be used to track people.

Robinson posted: “Dear Christians: the vaccines contain a bioluminescent marker called LUCIFERASE so that you can be tracked. Read the last book of the New Testament to see how this ends.”

Luciferase is a bioluminescence marker in a class of enzymes that can produce light in a chemical reaction, as when fireflies emit their own glow.

The word derives from the same Latin root used in “Lucifer” meaning “light-bearer” that appears once in the Bible to refer to Satan the devil: “How you are fallen from heaven, O Lucifer, son of the morning! How you are cut down to the ground, You who weakened the nations!” (Isaiah 14:12 NKJV)

While the CDC maintains luciferase is not in any COVID vaccine, Robinson vociferously disagrees, and wrote an article titled, “What is Luciferase? How a firefly enzyme that glows might herald the end of the world.”

In it, she alleges a diabolical plot by Big Pharma to hide the actual ingredients of COVID shots so people will remain unaware of the government’s desire to track individuals with the presence of luciferase in their bodies.

“Under the cover of vaccinating people, we are really preparing to tag and track people,” Robinson writes.

“The once free nations of the West are testing a new authoritarian system of total control under the guise of public health. Just look at Australia or New Zealand or Canada or Italy to see how basic civil rights have been suspended indefinitely and a pseudo-medical tyranny has been installed.

“The Great Reset is being implemented with the lie that it’s all about ‘protecting your health.’ Our military and intelligence agencies are not confronting China – they’re copying China. A totalitarian nightmare is being imported into free countries through surveillance technologies.

“You don’t have to be a Christian to understand that such technology will be used to build a global surveillance state. The vaccine mandates have already led to vaccine passports. The vaccine passports are basically QR codes to track you by connecting to your smartphone. This will inevitably lead very soon to biometric ID embedded into your body. You won’t be able to enter restaurants or buy groceries or go to work without it. As the Bible says: no one will be able to buy or sell anything except those that have the mark. You will know the mark by its name, which is the name of the beast: the enemy of all mankind who, before he fell, was an angel of light named Lucifer. That’s why ‘Luciferase’ should send a chill down your spine.”

Robinson claims “Big Pharma is paying Big Journalism to actively hide the truth around the world,” and concluded with an ominous warning:

How many thousands have been banned or suspended already by Big Tech for questioning the COVID vaccines in our supposedly free nation? How many of your civil rights, your constitutional rights, can they trample before your very eyes? America is no longer a constitutional republic: it’s more like a corporate oligarchy where Big Pharma and Big Tech and Big Government tell you every day what you’re allowed to do on Zoom calls from the CDC with Dr. Fauci. They’re not even pretending anymore. This is something like Day 575 of “15 days to slow the spread.” Our so-called civil servants and elected officials are never going to give up their new “emergency powers” on their own. They mean to rule over us, and everybody knows it.

That’s why the COVID-19 pandemic is being used to force everyone to get the new vaccines. That’s why natural immunity doesn’t count to anyone in the medical community. That’s why religious exemptions have disappeared at your work, along with medical exemptions. That’s why Ivermectin and hydroxychloroquine (and every other therapeutic drug) were swiftly outlawed. That’s why your 5 year old child will be “encouraged” and then coerced and then forced to take the jab, just as you were “encouraged” and then coerced and then forced to take the jab. That’s why the global vaccination campaign never stops when the already vaccinated start to get sick with COVID, or young boys suddenly die from heart inflammation, or world famous soccer players collapse on TV in the middle of games. That’s why health data (whether from Israel or Sweden or Florida or your local hospital) is totally irrelevant. The vaccine is being forced on everyone because the vaccine and the vaccine passport are the essential tools of a global surveillance system that will end everyone’s basic human freedom. You have been warned.

In the wake of Robinson’s original tweet, Newsmax issued a statement saying: “Newsmax strongly believes and has reported that the Covid-19 vaccines are safe and effective. We do not believe the vaccines contain any toxic materials or tracking markers, and such false claims have never been reported on Newsmax.”

Elliot Jacobson, the company’s executive vice president and chief content officer, said in another statement that the company is a “strong proponent that COVID-19 vaccines are overarchingly safe and effective.”

‘We have seen no evidence to suggest LUCIFERASE or LUCIFERIN are present in any vaccines or that they are used as any sort bioluminescent marker,” Jacobson said.

Jacobson also told the Hill that Newsmax does not believe “the vaccines contain any toxic materials or tracking markers.”