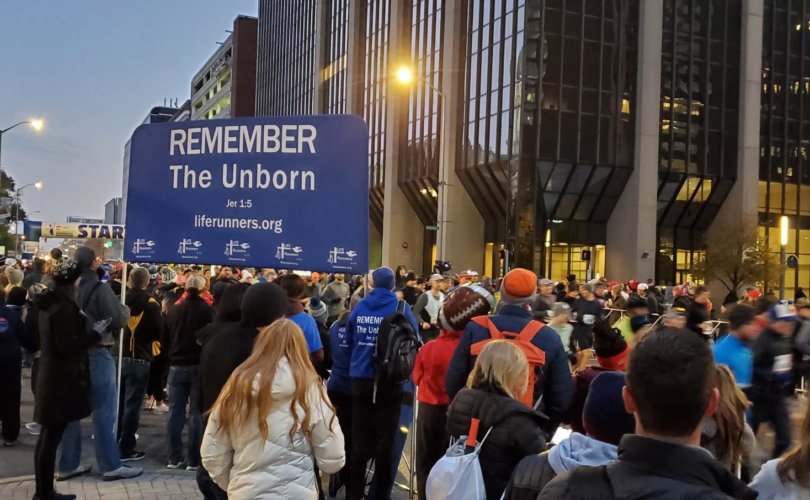 Life Runners carry the 'Remember the Unborn' banner at the starting line of the Indianapolis Monumental Marathon.LIFE Runners

INDIANAPOLIS (LifeSiteNews) — Pro-life runners witnessed to thousands at an Indianapolis marathon last Saturday, meeting with both resistance to and support of their “Remember the Unborn” message.

Pat Castle, the founder of LIFE Runners and a retired Air Force colonel, explained how the pro-lifers brought a large banner to the Indianapolis Monumental Marathon, bearing the LIFE Runners’ trademark message “Remember the Unborn, Jer 1:5,” placed for marathon runners to see and “reflect on” at both the start and finish of the race.

The inspiration behind the “Remember the Unborn” messaging, which is emblazoned on all LIFE Runners’ jerseys, is the statistic according to which “78% of post-abortion women said if just one person had offered support or if they viewed a supportive sign, they would have chosen life.”

“It really is a life-saving effort,” said Castle of the messaging that is at the core of the LIFE Runners group mission. He calls this effort to save lives “the frontline battle of good versus evil,” the battle against “the crown jewel of Satan, abortion.”

According to Castle, at the Indy Marathon, “There was no one else holding up a banner … It’s not like the banner had to compete with other messages. It makes an even greater impact, because we were the only ones standing there with a witness.”

Their banner had particularly great potential for impact because the Indy Marathon regularly has a turnout in the thousands, and is now one of the 15 largest marathons in the United States.

The wide reach of the message didn’t come without backlash, however, as was the case during the LIFE Runners’ last marathon in 2019.

Castle shared how at the Indy Marathon, a race director approached the LIFE Runners holding their “Remember the Unborn” banner and told them they needed to remove it. They pointed out that they were legally permitted to hold the banner there, since they were situated in a public right-of-way, but said they would move if the police asked them to do so. The director then indicated that he would call the police.

While police did arrive at the marathon, Castle said, they never approached the LIFE Runners to ask them to remove their banner or leave. “They were around us, near us, and saw the banner,” said Castle, who believes the police “assessed the situation” and determined that the LIFE Runners weren’t engaged in anything illegal.

In 2019 at the Route 66 Marathon in Tulsa, Oklahoma, LIFE Runners were asked by race officials to “Lose the jackets!” in reference to the blue jackets that bear the team logo and messaging. A race director also told Bishop Thomas Paprocki, the LIFE Runners chaplain, to remove the banner from the start area, which the director called “political.” The bishop, who is a canon and civil lawyer, held firm, invoking their First Amendment right to carry the message, despite the disapproval of the race director.

“So that happened two races in a row. So that gives you an idea of where the culture’s at,” Castle told LifeSiteNews. “Why aren’t we doing more of that? Why aren’t we boldly standing up and bearing [the] truth at these events? So the world can hear the good news?”

“Satan has done a very good job scaring people, intimidating people, harassing people to stop speaking life, to stop proclaiming the Gospel, to stop talking about God. And a chunk of that is just fear,” Castle said.

“The world has convinced us, or somehow given us the notion that it’s not polite or it’s not appropriate to speak in the name of the Lord, or to say Jesus’ name, or to offer healing, or to invite someone to Church. That [it] somehow has to be done after duty hours. Those of course are all lies. Our culture has gotten so ill that we’ve even lost sight of what we can do, let alone we ought to do.”

Inspire a woman to choose life

Castle invites anyone who wants to help save lives to join LIFE Runners so they can be a “living billboard” to inspire a woman considering abortion to choose life.

“Running is optional,” Castle said. “Anyone that’s willing to wear a shirt or jacket as a living billboard for life” can sign up to be a LIFE Runner.

“You can bring your shirt or jacket billboard into all the places that the world’s media can’t reach, like your own home, your neighborhood, the grocery store,” Castle said. He pointed out that since about one in three women in America have had an abortion, and about one in five pregnancies end in abortion, if you “walk in a grocery store in America,” “There is a very real chance that a mother in crisis could see your shirt and be encouraged” to choose life.

This decision, Castle pointed out, not only saves the life of a child but spares mothers “from the massive wound of abortion” and helps “preserve families, since 90% of relationships end when an abortion enters in.”

In addition to sharing the message “Remember the Unborn” with the world, many LIFE Runners also engage in what Castle calls “Redemptive running.” Pat’s brother, Steve Castle, has explained to LifeSiteNews, “We offer our whole bodies as prayer – not just our minds but also action.”

The LIFE Runners creed, which is prayed before runs and walks, affirms, “We run as a prayer, to defend children in the womb … ” Many LIFE Runners have shared how they pray during their runs, and offer up any suffering involved for the unborn or others. Bernadette Costello, an executive assistant for LIFE Runners who ran with her children this year, shared how prayer was a key part of their run and how it helped strengthen them through it. Costello said she was inspired by the endurance of her 11-year-old son, the youngest half-marathon finisher this year, who struggled at times to keep going.

“As we were running that one specific mile that he was struggling the most, I looked down at my watch and I said — do you know right now there’s mothers and fathers and families showing up at Carhart abortion facility and I said let’s run for them. Just keep your legs moving for each one of them, and then I led them in a prayer about that. It’s really neat how inspiring the prayers were for them,” Costello told LifeSiteNews.

Sign up to become a LIFE Runners member here: https://www.liferunners.org/join-now-2