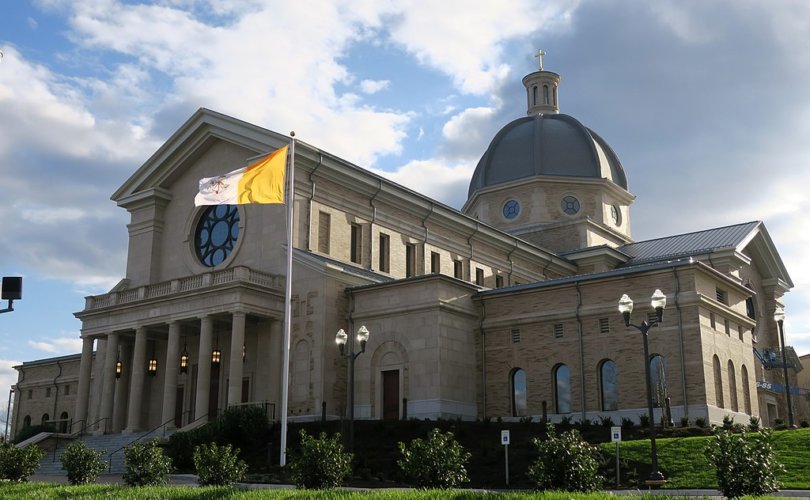 Jenny Hay and Gary Shurina were charged with criminal trespassing after they were praying and preparing to pass out information on the risk-benefit analysis of COVID jabs for minors on cathedral grounds, where a “vaccination” clinic was being held that morning for anyone ages 12 and up. Hay, Shurina , and protest co-organizers John and Penny Manczko were asked to leave Sacred Heart Cathedral at the direction of its rector, Father David Boettner. Hay and Shurina respectfully refused.

The police had requested that they take the protest off church property, but as Hay explained in an interview with John-Henry Westen, “This is a huge property. If we took it off property, we may as well not be there.”

The two were arrested, jailed for a short period, and then released to remain at liberty until trial.

This week, the Knox County Fourth Sessions Court judge told Hay and Shurina that the district attorney decided to drop all charges against them, and that their arrest has been expunged from their records.

Hay told LifeSiteNews, however, that the judge also warned them: “But the church has asked you not to come on the property again.”

She responded, “I’m not prepared to agree to that condition today.”

“It’s not a condition. The DA is dropping all charges, so if you want to go back and get arrested again for trespassing, have at it,” the judge said.

Hay believes that Catholics can rightly have conscience objections to the COVID shots because of their testing on fetal cells derived from aborted babies. She also believes they pose potentially serious risks to health, particularly in children.

The “VAX Facts” info sheets she and fellow protesters had planned to disseminate in front of the “vaccination” clinic included points about how not only does COVID-19 pose virtually no risk of death for children, but youth in Tennessee have suffered “severe cases of myocarditis” after COVID “vaccination.”

She explained that while she would also try to discourage what she sees as harmful vaccination of adults taking place at a church, she wouldn’t go to jail over adults alone. She draws that line at the injection of children.

“It’s the intersection of the two — the Church hurting children — that I just couldn’t abide,” Hay told LifeSiteNews. “Either I had to be there to hand out information that would help parents make a truly informed decision or get arrested trying.”

“Years from now, beyond the hysteria of the present moment, people will look at this and ask, ‘What in the world was the Catholic Church thinking, injecting healthy children with an experimental vaccine for a disease that never threatened them?’ This will cause spiritual harm to souls for years to come,” Hay continued.

In Hay’s discussion with Westen, she compared the tactic of vaccinating kids to protect the adults around them, which she believes is the only logical reason why kids are being injected with a risky “vaccination,” to that of witches in old stories.

The witches “draw upon the vitality of the youth for their own health and well being and beauty,” Hay said. “Christians don’t do that. They protect children. They don’t use children to protect themselves.”

“Even if there were no side effects, it’s still wrong,” Hay told LifeSiteNews.

She also sees the hosting of the COVID jab clinic on church grounds as a way to bypass First Amendment free speech protections.

“What good is the First Amendment if the government — in this case, the Knox County Health Department — can shield itself from criticism by doing its business on private property, with the expectation that the private entity will take care of having dissenters arrested for criminal trespassing?” Hay said.

When Westen asked Hay, a mother of six, how her family reacted to her arrest, she explained that she had previously discussed the possibility with her husband, and they “were both okay with it.”

“But then when it really happened, it was actually very scary. It was very scary for my husband. He tried to do his best to shield my kids. But I think they wanted to know why mom wasn’t home.”