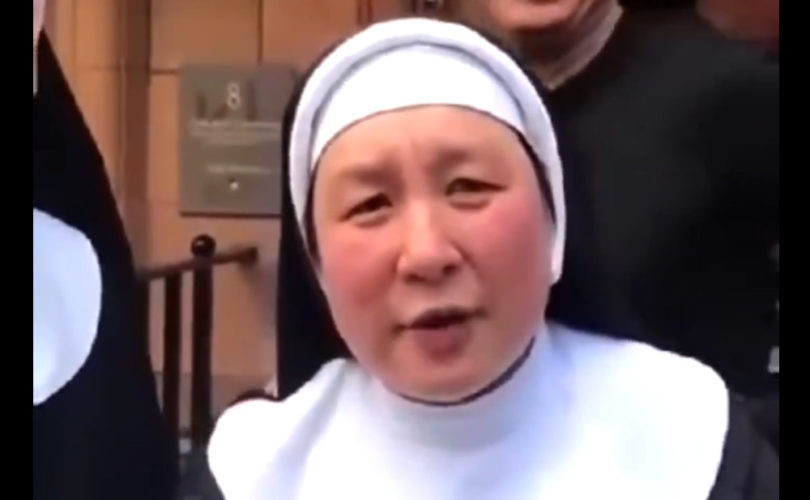 LONDON (LifeSiteNews) — The Mother Superior of London’s Tyburn convent issued a statement in response to an article saying she was reported to the Vatican after sisters complained they felt “under pressure not to have the vaccine.”

Mother General Marilla, whose revelation that she had received 50 prayer requests for people who died after COVID jabs went viral last year, responded yesterday to the Sunday Times article “Antivax Mother General reported to the Vatican,” to correct misinformation about her and her convent, and provide missing information about her approach to COVID “vaccination” for her sisters.

Marilla explained in her statement, shared with LifeSiteNews, that one of the authors of the Times article, David Collins, had called her prior to its publishing, telling her “that there were sisters from the convent making allegations” that she was “bullying them into not taking the vaccine.” According to Marilla, this was the first time she had heard of these allegations, but Collins was “not able to tell” her which sisters were making them.

Marilla wrote, “Throughout 2021 I have expressed clearly to every sister in our Institute that it is my right and also a moral duty to express my opinion regarding these anti-Covid injections, but they have the complete freedom of choice of whether they wish to take the anti-Covid injections or not. I have communicated this by email, by writing on the community chalkboard and also verbally to a few individual sisters.”

“I, in fact, do not know the vaccine status of any of our sisters because I have not asked them. It is their own business and I do not pry into it,” she continued.

Marilla, who is the worldwide leader of the Benedictine congregation of the Adorers of the Sacred Heart of Jesus of Montmartre, then shared her “most recent email to the entire Congregation” regarding the subject, which was sent on April 28, 2021:

Would you please explain to the sisters that they have the right to choose whether they wish to take the Covid 19 vaccine or not.

I only ask for the safety of the community that any sister who has taken the vaccine that she isolate for a period of time.

With my blessings to all.

Yours devotedly in the Eucharistic Heart,

Marilla called out the Sunday Times’ “misinformation” contained in the following statement from their article: “While many of the nuns at the convent have taken a vow of silence and rarely set foot in the outside world, Marilla has taken to the streets during anti-lockdown protests, filmed by demonstrators preaching about the vaccine being extremely dangerous.”

She corrected this claim, writing, “None of our sisters have taken a vow of silence. In addition, it is quite clear on the videos taken during the particular demonstration mentioned that I was on the front doorstep of Tyburn Convent. I strongly defend my right to be standing on our convent’s front doorstep.”

She also reproved the article’s title description of herself as “antivax,” pointing out that she has shared publicly that before COVID-19 she would “most likely have described” herself as “Pro-vax,” since she has “had many, many vaccines from early childhood.”

“However, regarding the anti-Covid injection I would most definitely consider myself vaccine hesitant,” she added.

Marilla said she had “been threatened on numerous occasions to be reported to the Holy See and in particular to the [Congregation for Institutes of Consecrated Life] for reasons of perceived non-compliance.”

“In these cases,” she wrote, “those who have issued such threats have almost entirely ignored fundamental rights.” She further explained that the “opinions” she has expressed about the COVID injections “have arisen out of a genuine and reasonable concern for the safety and health issues” arising from these shots.

Marilla shared with LifeSiteNews last summer that in addition to prayer requests regarding post-injection deaths, her convent had received prayer requests “for over a hundred people who have been injured” after the injection, adding, “we have lost count of how many because there are too many.” Reported injuries shared with the sisters included blood clots, incidents of blindness, and even one case of paralysis in a young woman who took the jab in order to keep her job.

She had also told LifeSiteNews that while she saw that people were dying from what she called a “manipulated virus” — including some family members of the convent’s sisters — they were “asked to pray for many more people who have died from the COVID-19 vaccines than the virus itself.”

“It is deeply disturbing that instead of a willingness to investigate or even take seriously these concerns I have received instead reprimands, threats, and vilification,” Marilla wrote in yesterday’s statement.

She concluded with an appeal to those who been killed or injured by the COVID jab:

“Who has the liability for any death or injury resulting from these anti-Covid injections? Who is to compensate for all that they have suffered? It is long past the time to speak up for them. They are ignored, they are dismissed, they have no one to turn to. They have turned to us to ask our prayers, and we are praying for them and sacrificing for them,” Marilla wrote.