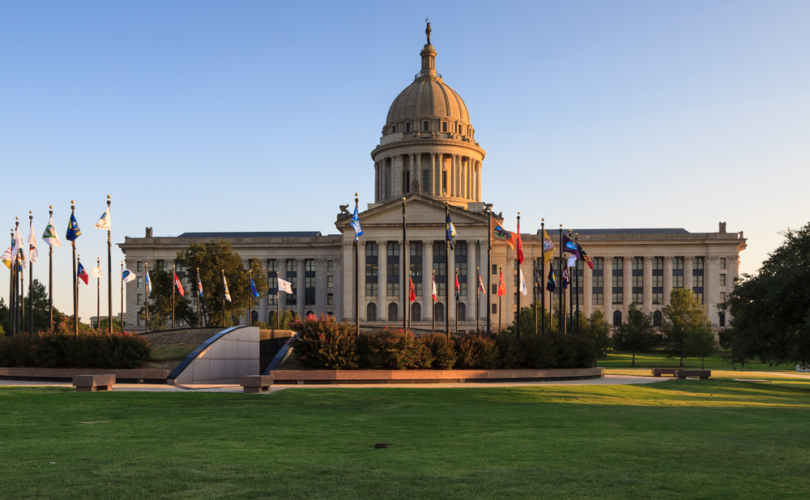 OKLAHOMA CITY (LifeSiteNews) — The Oklahoma House passed Tuesday a “Life at Conception” bill that would make all abortions illegal except for those performed to save the life of the mother if Roe v. Wade is overturned.

Senate Bill 612, which overwhelmingly passed the state Senate last year, would render anyone who “performs” an abortion “guilty of a felony and subject to a maximum fine of $100,000, a maximum term of imprisonment of 10 years, or both,” according to the legislation’s written summary.

The bill now heads to Gov. Kevin Stitt, who previously said he would sign into law any pro-life legislation.

S.B. 612 specifically states that it “criminalizes any abortion performed in the state except to save the life of a pregnant woman in a medical emergency,” but exempts the woman seeking the abortion from any criminal penalty, adding that it would “not authorize charging any woman with any criminal offense in the death of her own unborn child.”

Republican state Rep. Jim Olsen of Roland, who authored the legislation, told The Herald Bulletin that if signed into law it can only be legally enforced if the U.S. Supreme Court overturns Roe v. Wade in a ruling on Dobbs v. Jackson Women’s Health Organization expected later this year.

Students for Life of America told The Herald Bulletin that Oklahoma’s “Life at Conception Bill” is “the second bill of its kind to advance through a legislature,” with the first being passed and signed into law in Arkansas last year.

Olsen has “described it as Oklahoma’s strongest anti-abortion legislation sent to the governor to date,” The Herald Bulletin reported.

The Oklahoma House of Representatives also adopted a resolution on Tuesday “to recognize January 22, 2022,” the day Roe v. Wade forced the legalization of abortion throughout the U.S., “as the Day of Tears in Oklahoma,” to “encourage” residents to “lower their flags to half-staff to mourn the innocent, preborn children who have lost their lives due to abortion.”

Both votes took place as pro-abortion protesters rallied outside the state Capitol to oppose “more than half a dozen measures” that they fear would restrict abortion access in Oklahoma.

The “Life at Conception” bill is one of many strongly pro-life “trigger bills” being written across the country in anticipation of the potential repeal of Roe v. Wade. Family Research Council today released an updated map of the U.S. that shows what protections for the unborn “could go into effect when Roe is overturned.”