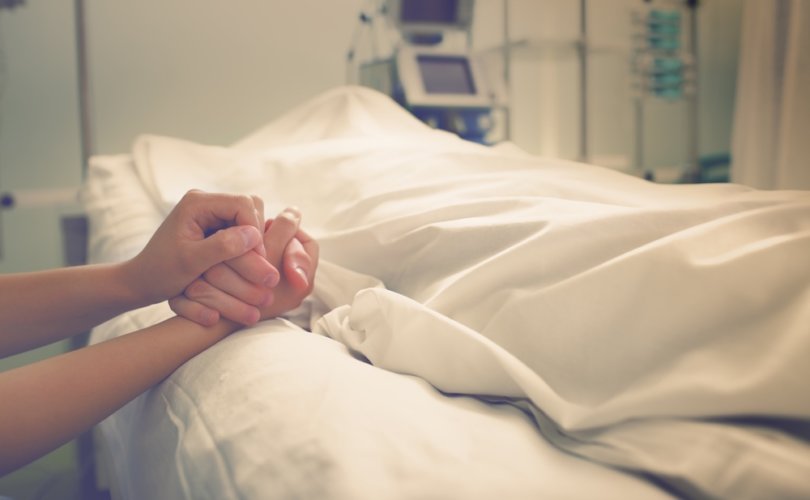 APPLETON, Wisconsin (LifeSiteNews) – The father of a 19-year-old with Down syndrome suspects his daughter’s death was the result of murder and part of a “genocidal agenda,” if not the result of “gross negligence.”

Scott Schara told LifeSiteNews he has devoted over 500 hours of research to investigating the death of his daughter, Grace, which occurred as she was hospitalized for COVID-19. According to Schara, “At least 100 doctors and health care professionals have called her death murder.”

The “smoking gun” indicating Grace’s doctor’s orders killed her is the record of medications, by dosage, administered to her on the day of her death, October 13, 2021. Schara has shared, using information from the hospital, that even as Grace’s doctor told him she had a “good” day, the doctor had finished orders for three contraindicated sedative medications for Grace.

That morning, the doctor had pressed for the fifth time to have Grace put on a ventilator, according to Schara.

Grace was already sedated on maximum doses of Precedex that morning when she was given Lorazepam, which “can increase the risk of serious or life-threatening breathing problems, sedation, or coma if used along with other sedative medications.” The Lorazepam was given late that morning and again just before evening.

About 25 minutes after her last dose of Lorazepam, Grace was administered 2 mg of morphine, which “can slow or stop breathing resulting in death, especially when combined with other sedative medications,” the package insert warns. The morphine was administered as an IV push.

Schara shared the analysis of a doctor who wishes to remain anonymous: “Each of these meds (Precedex, Lorazepam, and Morphine), on their own, have an increased risk of serious or life-threatening breathing problems and cardiac arrest, and there’s an additive effect when used in combination. To use them like they did in a person with a diagnosis of acute respiratory distress is beyond believable as to intention.”

What sealed Grace’s fate was her doctor’s declaration that she had a Do Not Resuscitate (DNR) order, which was used by the hospital staff as an excuse for their refusal to reverse the morphine dosage, despite the DNR’s unlawfulness.

According to Wisconsin law, DNRs must be signed in writing, and patients are to be given a DNR bracelet indicating that status. Even once a DNR is officially in place, guardians of qualified patients like Grace can revoke the DNR by directing appropriate health personnel to “resuscitate the patient,” upon which the personnel are to “promptly remove the do-not-resuscitate bracelet.

Schara has made clear that the family “never signed any statement regarding Grace being DNR,” nor was Grace wearing a DNR bracelet. On top of that, hospital personnel refused to reverse the morphine given to Grace upon the family’s desperate request, with the excuse that Grace was DNR, despite their legal obligation to resuscitate Grace at her family’s request even if she was officially DNR.

“The first time we knew Grace was labeled DNR was when we were screaming for the nurses to do something and reverse the morphine given to Grace. Their response, ‘She’s DNR,’ was their excuse for not helping her,” Schara recounted. “They stood outside her door instead. There was also an armed guard outside the room.”

According to Schara, the hospital said Grace was labeled DNR because Dr. Shokar had noted that the family “agreed” during a phone call “in regards to not pursuing a resuscitation via CPR or defibrillation in the event of respiratory arrest leading to cardiac arrest.” From Schara’s view, “This was all hypothetical, in that Grace had good days on October 12 and 13.” Despite this phone call, short of signed, written consent, the doctor could not officially declare a DNR.

Schara said hospital staff have refused to meet with them to discuss their assessment of Grace’s death. “Before going public, the family submitted a detailed summary, with supporting research, to the hospital with a request to meet with the CEO and the doctor involved…The hospital response was a refusal to meet,” he wrote.

Schara suspects that Grace’s death was ultimately motivated by hospital profit, and that after he refused to put Grace on a ventilator for the fifth time (the morning of Grace’s death), the hospital decided to dispose of her in favor of “better paying patients” waiting in the ER.

Senator Scott Jensen, a physician in Minnesota, told Laura Ingraham in 2020 that hospitals get three times as much money if COVID patients on Medicare need a ventilator.

Schara has also pointed out that hospitals receive an “ICU bonus for patients on Precedex.”

Schara believes Grace’s death is part of a larger pattern of COVID patient deaths due not to the virus but to government protocol for COVID hospital patients, which includes the use of what he suggests are dangerous treatments, including ventilators and Remdesivir.

In addition to boosting hospital profits, ventilators have been found to result in an extraordinarily low survival rate for patients. One analysis of hospitalized U.S. COVID patients found that 88 percent of ventilated patients died, compared with an overall death rate for COVID patients of 21 percent.

Medical expert Dr. Bryan Ardis has shared concerns that both mechanical ventilation and remdesivir, which has a high mortality rate, are responsible for expediting the deaths of “a lot of Americans [who are admitted to hospital] innocently looking for treatment.”

Schara theorizes that if a patient refuses ventilation, but is elderly or disabled, that it may be standard to “administer end of life meds.” He has also pointed out that hospitals receive COVID “death bonuses” of $13,000 per patient.

“Are hospitals exterminating the disabled and elderly at the government’s instruction? Because non-contributing members of society are expensive to keep around?” Schara asked in his written commentary on Grace’s death.

He has concluded that she died “from either gross negligence, murder, or a genocidal agenda.”

Schara has published a website devoted to the memory of Grace, as well as his investigation and analysis of her death.

LifeSiteNews has contacted St. Elizabeth hospital for comment, but has not yet received a response.