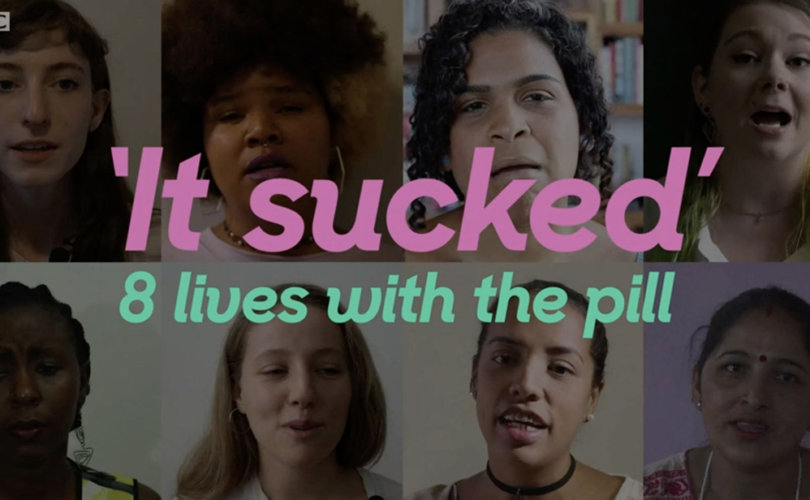 Beginning of BBC special on the pillBBC video frame capture

August 31, 2018 (LifeSiteNews) – The conversation about the birth control pill’s dark side continues to become more mainstream, with the BBC recently highlighting eight women from different countries and their negative experiences.

As part of BBC Future’s “The Health Gap” series exploring how “women experience the medical system” differently from men, the network interviewed eight former pill users about why they decided to go off the pill. The women hail from countries including the United States, Nepal, Tanzania, and Venezuela.

The women describe taking the birth control for reasons ranging from pregnancy prevention to treatment for cysts and heavy menstrual bleeding. The physical and mental fallout was at least as diverse.

“I was experiencing full-body muscle pain and having like heart palpitations,” one woman says. Another recalls becoming depressed and experiencing a decreased sex drive. Others say the pill caused them to suffer from skin spots, weight gain, “lumpy tissue all under my arms,” a pulmonary embolism, and a thrombosis (a potentially fatal blood clot).

The pill has been linked to an 80% increased likelihood of depression and as much as a sixfold rise in the risk of thrombosis, according to the BBC.

“I would have times where I was awake for three days straight because I was having such insane anxiety attacks I couldn’t sleep,” another explains. “I started taking antidepressants and anti-anxiety medication, and even with the medication I still had horrible anxiety attacks, I still had depressive swings where I sometimes couldn’t get out of bed, and couldn’t go to class, and it sucked.”

Birth control gave another interviewee “these migraines that would shock my body into so much pain that I would have seizures […] I had to give up performing and I had to give up teaching.”

The good news is that it didn’t take long after dropping the pill for the women to see improvement. The bad news is that when seeking help, the medical experts they consulted failed to identify birth control as the possible cause of their symptoms.

“No one said anything about it. Not any of the psychologists or therapists or gynecologists,” the woman with the anxiety attacks recalls. “Something that our medical system should have known.” The woman plagued by migraines and seizures says she saw nine neurologists who attempted 32 different medications over a two-year period.

“Just like the cigarette boxes the pill should have all the pros and cons on the box,” one woman suggested. “Everything that can happen to you when you take the pill.”

The BBC reports that 30% of the 45 million American women who have used the pill stopped due to dissatisfaction, with “side effects” being their most common reason. Other research and personal testimony has linked oral contraceptives to increased risk of blood clots, hair loss, Crohn’s disease, brain shrinkage, breast cancer, hardening of the arteries, glaucoma, and cervical cancer.

Curiously, women interviewed by the BBC suggested that male birth control options “that caused the same symptoms in men” were “never pushed through” because of male privilege: “why should a man have to deal with those types of symptoms?”

In fact, the female-led Planned Parenthood is the one of the world’s largest and most aggressive proponents of the pill, lobbying for it to be widely and easily available and even offering to help minors obtain it without their parents’ knowledge. The abortion giant’s website admits some potential side effects and that the pill “isn’t for everyone,” but pushes an overall message that “Chances are the pill will be totally safe for you” and “most people can take it with no problems.”

The increasing mainstream acknowledgement of the pill’s dark side may be part of a broader cultural trend. The pro-abortion “feminist” website Refinery29 reported earlier this month that their own survey found that less than half of millennial women consider themselves feminists, because they see modern feminism as over-prioritizing issues like abortion and birth control.