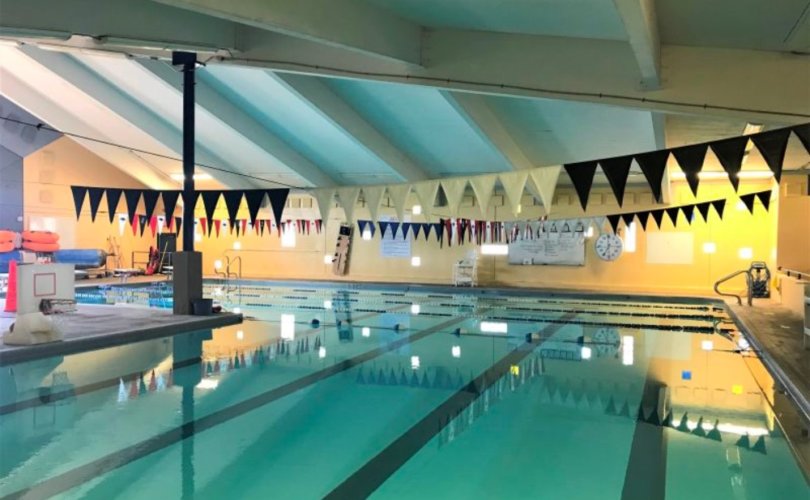 PORT TOWNSEND, Washington (LifeSiteNews) – An 80-year-old grandmother in Washington state has been banned from swimming at the YMCA after she complained that “a man in a women’s swimsuit” was “watching little girls” change.

“In an effort by the city and the YMCA to apply the neo-cultural gender rules at Mountain View Pool dressing, shower room facilities, women and children are being put at risk,” 80-year-old Julie Jaman told Port Townsend City Council on Monday.

Explaining why she feels this way, Jaman said that on July 26 she was showering in the local pool’s facilities when she heard “a man’s voice in the women’s dressing area.”

When she went to look at what was going on, Jaman said that she witnessed “a man in a women’s swimsuit, watching little girls pull down their bathing suits in order to use the toilets in the dressing room.”

While disputing Jaman’s account, the YMCA’s Marketing and Communications Manager did not deny the presence of the man, but told The Post Millennial that the staff member in question was not “engaging” with the young girls but was simply escorting them to the dressing room.

The Communications Manger also confirmed that Jaman was indeed banned from the facility, but stated that this issue is just one in a series of many that led to that decision.

In a local report from the Port Townsend Free Press, Jaman went into more detail about what she says happened during the July 26 incident.

“There were gaps in the curtain and there I was, naked, with soap and water on me, and this guy, right there very close to me,” recalled Jaman.

At that point Jaman says she noticed that one of the managers of the facility, a female, was also present in the room, and addressing her she demanded, “Get him out of here.”

“You’re discriminating and you can’t use the pool anymore and I’m calling the police,” replied the manager, according to Jaman’s account

The local report explains that in talking with Port Townsend Police Officer Marc Titterness, it was confirmed that Jaman did speak to police after she become “very triggered” and “had an emotional response to a strange male being in the bathroom and helping a young girl take off her bathing suit.”

Other police reports obtained by the Port Townsend Free Press show that anonymous callers from the YMCA also contacted police during the incident, complaining that Jaman had been “asked to leave and is refusing.”

— Article continues below Petition —
Parents' Pledge: We will pull our children out of explicit sex-ed classes
Show Petition Text
3742 have signed the petition.
Let's get to 4000!
Thank you for signing this petition!
Add your signature:
Show Petition Text

Another report includes a caller who alleged that Jaman was “screaming” at an employee and “calling [them] names.”

As the transgender agenda continues to gain steam, the issue of men who call themselves women using female-designated washrooms has become a major source of controversy throughout America, and the rest of the Western world, over the past few years.

Despite multiple criminal incidences resulting from the allowance of biological males in female washrooms, U.S. President Joe Biden signed an executive order with the intention of “preventing and combating discrimination on the basis of gender identity or sexual orientation” in the first few weeks of his presidency, setting the stage for the U.S. Department of Agriculture (USDA) to announce an update to its rules for federal funding for school lunches in May of this year.

Under the new, radical rules, if a school wants to qualify for the federal lunch program they are required to consider “gender identity” a protected class and let biological male students use women’s and girls’ restrooms.