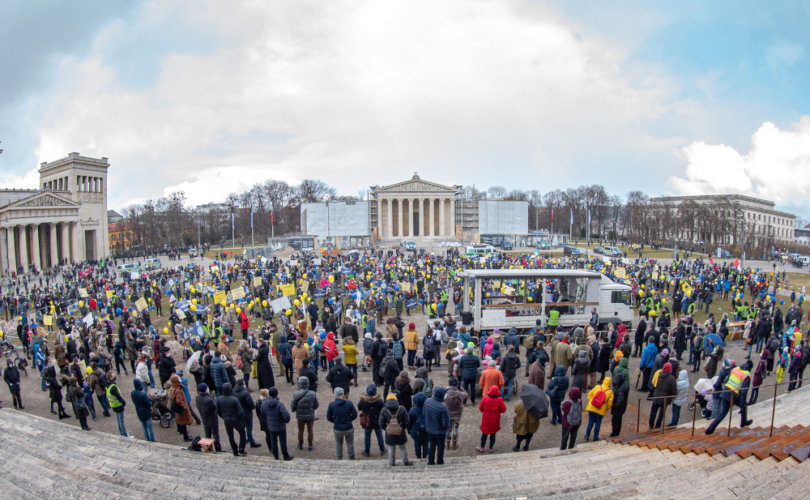 MUNICH, Germany, March 23, 2021 (LifeSiteNews) — Roughly 800 pro-lifers gathered in Munich, Germany, last Saturday for the first-ever “March for Life” in Bavaria’s capital. The most prominent March for Life in Germany takes place in Berlin every September.

“All beginnings are difficult,” says the proverb. And at first glance, one might have the impression that this sentence proved true once again last Saturday.

But it’s possible to see it differently: Extensive COVID regulations with a participant limit of 550 people, masks, and social distancing requirements, adverse frosty weather with snow flurries, as well as limited advertising for the event on the part of the organizers due to the expected restrictions, could not prevent significantly more than 500 people (the left-wing newspaper taz mentioned 800 participants — and would likely not do so without reason) from taking part in the first Munich March for Life.

It quickly became apparent that this new but long-overdue event was not a Bavarian imitation of the annual March for Life held in Berlin in September: Colorful balloons instead of white wooden crosses, and the colors blue and yellow dominated the arrival of the “pro-life generation” in southern Germany.

Thanks to police present at the event, it was an undisturbed and joyful celebration for life, despite the adverse weather and attempts at disruption by radical leftists.

It became clear that the organizers, who are part of the association “Stimme der Stillen” (Voice of the Silent) had been inspired by the concept of the March for Life in Vienna, Austria, which was reorganized three years ago and has since been very successful. Like Vienna, Munich had planned a veritable celebration of life.

The Munich march was internationally integrated, with shorts addresses by organizers of other marches around the world, including Australia, Croatia, Spain, Argentina, the United States, Belgium, Italy, and Austria.

The singer Vero had joined the event, singing her song “We are the pro-life generation,” which made the participants, cold from standing around in freezing temperatures, want to dance.

“Despite the COVID-related constraints and the wintry weather, our approved event was able to take place with so many participants,” Silja Fichtner, one of the organizers, said. “We are totally overwhelmed.”

The initiative came about because the organizers are convinced that every human being has a right to life, regardless of social status, sex, age, or health. “And no one, no state, no lobby groups, really no one has the right to define what life is worth living,” Fichtner added.