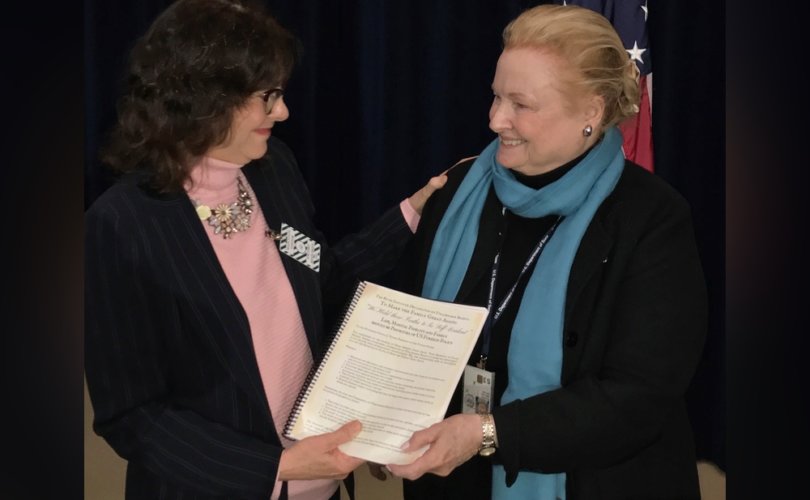 February 26, 2020 (LifeSiteNews) – A petition signed by 8,000 people asking President Trump to “make the family great again” by making life, marriage, and the family guiding principles in U.S. foreign policy was delivered on Friday to the US State Department’s Commission on Unalienable Rights in Washington D.C.

The Ruth Institute along with LifePetitions presented its “Make The Family Great Again” petition along with its signers to the Commission’s Chairman, former Ambassador to the Holy See Mary Ann Glendon.

“We are concerned about the rights of the family and the rights of children,” said Ruth Institute Founder and President Dr. Jennifer Roback Morse prior to hand-delivering the petition. The Ruth Institute is a global non-profit organization equipping Christians to defend the family and build a civilization of love. Also present at the petition delivery was Gualberto Garcia Jones, Director of Advocacy at LifePetitions.

“I'm going to tell them that we hold these truths to be self-evident: that every person comes into the world as a helpless baby, that every person has a mother and a father, that every society needs some structured institutions for getting children from helpless infancy to responsible adulthood, and that the needs of children place limitations on the behavior of adults, including adult sexual behavior,” she said prior to delivering the petition.

Morse told LifeSiteNews that after delivering the petition, Ambassador Glendon told her that she was “grateful for our interest in the Commission’s work and promised that our petition would be permanently stored in the State Department’s archives.”

It’s been a long road from when the Ruth Institute launched its petition last September, in partnership with LifePetitions, to the meeting at the State Department on Friday.

In July, the Commission on Unalienable Rights was appointed by Secretary of State Michael Pompeo to advise his department on how to incorporate an understanding of authentic human rights into its dealings with international bodies and foreign governments.

Morse said that the petition “urges the Commission to make the family its focus, by acknowledging that human rights start with the family.”

It declares that the Commission should work for an understanding of the rights which undergird the family, including:

Besides 8,000 online signers at LifePetitions.com, the petition was also signed by an illustrious array of leaders in the United States and from around the world.

Signers from outside the United States included:

Morse testified at the Commission meeting that day: “Pro-family leaders from around the world have signed our petition, which we undertook in partnership with LifePetitions. The pro-family leaders from Latin America and Africa are especially aware of the harm international agencies can do when they ignore the rights of the family mentioned in our petition. All too often, the United States government has collaborated in the promotion of destructive policies which undermine the rights of children to their parents, and parents’ rights and responsibilities toward their children.” Read complete testimony here.

The Ruth Institute intends to continue pressing the Commission on Unalienable Rights and the State Department to make the family the basis of its human rights policy.