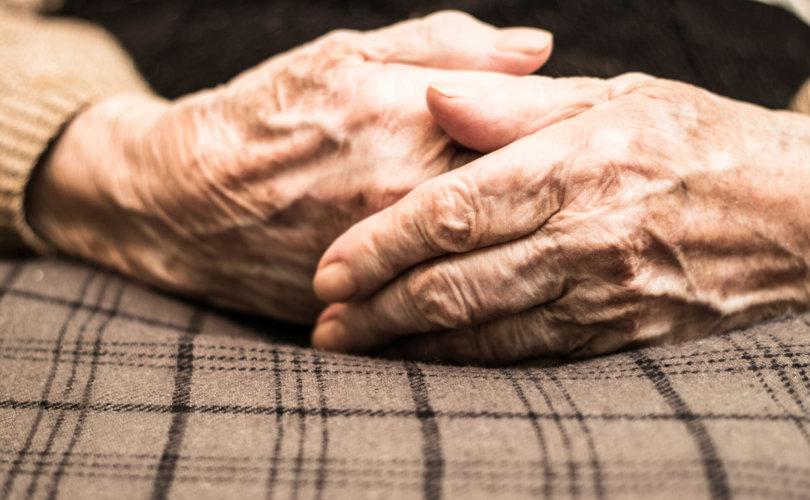 BRIDGEPORT, Nova Scotia, August 31, 2020 (LifeSiteNews) — A 82-year-old woman’s request to stop her husband of 48 years from being lethally injected will go before Nova Scotia’s appeal court in a little over three weeks.

However, the temporary injunction now preventing the man from being euthanized is currently in legal limbo.

But she reserved ruling on staying a lower court’s mid-August ruling that denied the injunction.

Van den Eynden said it was “a very time-sensitive matter” and that she would try to get a decision out as quickly as possible,” but she did not say when, Canadian Press reported.

The complicated legal battle is the first time since the Justin Trudeau Liberal government legalized euthanasia in 2016 that an individual’s request for to be lethally injected has been paused.

Katherine (her surname is not reported in the media because a judge ruled the man’s identity should remain private) is arguing that her 83-year-old husband does not meet the federal law’s criteria for euthanasia because he is not dying.

She further argues that he lacks the capacity to make this decision because he suffers from anxiety and hypochondria, and has “delusional” beliefs about his medical condition.

“He’s being pushed by his own mind to want to end his life. It’s a suicidal frame of mind,” she told CTV News.

Her husband, a retired university professor, has chronic obstructive pulmonary disease. He also had several small strokes decades ago and was diagnosed with dementia in 2019, according to CTV News.

Moreover, the dispute has rent the couple’s hitherto stable marriage.

Her husband has “been away from me now since July 31, and I don’t know where he is and he won’t talk to me on the phone,” Katherine told CTV News.

Husband ‘delusional’ about his medical issues

Katherine’s husband was originally scheduled to be lethally injected — or to receive Medical Assistance in Dying (MAiD), as it is called  — on August 3.

Bill C-14 defines a “grievous and irremediable medical condition” as a serious and incurable illness or disability that results in an advanced state of irreversible decline in capability and causes intolerable physical or psychological suffering, and that natural death is “reasonably foreseeable.”

Katherine’s husband first applied for euthanasia in April, but “two of the three assessors either found he didn’t have capacity or his death was not reasonably foreseeable,” one of her lawyers, Hugh Scher, told LifeSiteNews.

However, he applied again in July “with three assessments done by MAiD-sympathetic doctors, and they all found that he had capacity and was dying in the foreseeable future so they therefore approved him,” Scher said.

“The case raises the fundamental question about the arbitrary application of the rules regarding MAiD,” he told LifeSiteNews.

“To what extent a person is going to be able to keep shopping for a doctor until they find somebody who tells them what they want to hear … even after they’ve been denied because they don’t meet the criteria?” he pointed out.

There’s also a “serious concern” that an individual can be approved for a lethal injection based on a “delusional belief” about his health conditions, Scher added.

In this case, Katherine’s husband “has a delusion about what’s causing his medical issues that is not backed up by the medical evidence,” he said.

When Katherine’s husband’s euthanasia was approved in July, she threatened legal action and turned to the Euthanasia Prevention Coalition for help.

The temporary injunction was briefly granted, but after Nova Scotia Supreme Court Justice Peter Rosinski heard arguments on August 7, he released a decision a week later denying it.

The judge agreed that there were “serious issues to be tried, and that there would be irreparable to my client if the injunction were removed,” Scher told LifeSiteNews.

During the August 26 phone-in hearing before Van den Eynden, Scher argued a stay of the lower court decision denying the injunction was essential to stop the man from being euthanized “before we have a determination legally authorized as to whether or not he has capacity and or whether or not he meets the criteria,” Canadian Press reported.

The case “really calls into question the need for court oversight in those cases where there’s a significant conflict amongst multiple competing assessors as to capacity and as to whether the legal criteria are met,” Scher told LifeSiteNews.

That was echoed by EPC’s Schadenberg.

“This is a case where if euthanasia is approved, it’s based on his delusional beliefs about his health conditions,” he said.

“The question I have to ask is how many other people have died by lethal injection in Canada who in fact had delusions about their health conditions that weren’t accurate at all.”

There are two other lawyers assisting Scher on the case and EPC, including constitutional law specialist John Campion, and the legal fees are expected to be at least $50,000, he said.