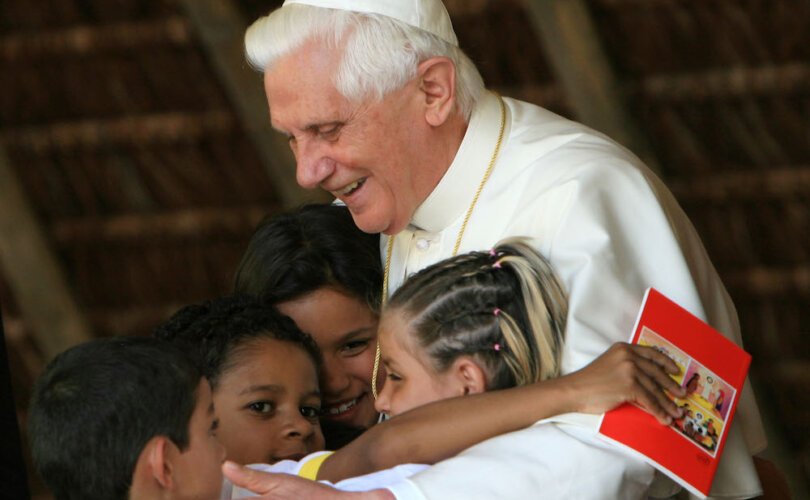 GUARANTIGUETA, BRAZIL- MAY 12: Pope Benedict XVI embraces childrenl during a visit at the Fazenda da Esperanca, a facility for recovering drug addicts, May 12, 2007, in Guaratingueta, Brazil. Franco Origlia/ Getty Images

(LifeSiteNews) — With the death of Pope Benedict XVI, the Catholic Church has lost (on earth) one of the greatest pro-life advocates in her history.

A renowned theologian known for fighting relativism and trivialization of the liturgy, Benedict also leaves behind an enormous legacy of promoting life.

From his key writings and speeches, political interventions, and interactions with world leaders, he made the cause of life a defining theme of his papacy.

With the exception perhaps of Pope St. John Paul II, whose pro-life efforts Benedict XVI continued and expanded on, few can match his record.

From the beginning of his pontificate, Pope Benedict XVI used his role as pope to emphasize the right to life and combat the “plague” of abortion.

In his first book published after his papal election, Benedict doubled-down on the Church’s pro-life stance, stressing that “There is no such thing as ‘small murders.’”

While performing his first baptisms as pope, he took the opportunity to assail the “culture of death” and “irresponsible” sexuality that leads to it.

“As far as the right to life is concerned, we must denounce its widespread violation in our society,” Benedict said in his 2007 message for the World Day of Peace, an event that he typically used to promote the defense of life.

“How can it be that the most wondrous and sacred human space – the womb – has become a place of unutterable violence?” he lamented at World Youth Day the following year.

Respect for life featured regularly in his monthly prayer intentions and animated his foreign trips.

He began his first papal visit to Latin America by endorsing the excommunication of pro-abortion politicians, and during a powerful speech in Austria, urged political leaders “not to allow children to be considered as a form of illness.”

In his encyclical Caritas in Veritate, Benedict passionately condemned abortion as a “tragic and widespread scourge,” linking it to “systematic eugenic programming of births” and “a pro-euthanasia mindset” that deems certain lives “no longer worth living.” He gave a copy of the encyclical and Vatican guidelines against embryonic research and contraception to Barack Obama during their first meeting.

Across his addresses and teachings, Pope Benedict XVI notably identified the right to life as a “non-negotiable” value, often alongside the protection of marriage and parental and conscience rights.

“As far as the Catholic Church is concerned, the principal focus of her interventions in the public arena is the protection and promotion of the dignity of the person,” he told members of the European People’s Party in 2006, highlighting, first of all, “protection of life in all its stages.”

Benedict XVI proved himself to be a warm friend of pro-lifers and a crucial leader of the international pro-life movement in his years as pope.

He publicly supported pro-life groups and marches for life around the world, including in the U.S., France, Italy, and Belgium.

“How many human lives have you saved from death!” he told Italy’s Movement for Life in 2008. “Continue along this path and do not be afraid, so that the smile of life may triumph on the lips of all children and their mothers.”

In 2010, he hosted an unprecedented prayer vigil for life at St. Peter’s Basilica to open the liturgical year, held alongside thousands of similar events at parishes and dioceses. At the vigil, he specially thanked those “dedicated to welcoming and safeguarding human life… especially in its early days and in its early stages.”

His death prompted an outpouring of appreciation from the pro-life movement.

The German pontiff also showed his deep concern for life with his many personal interventions in political debates about abortion and euthanasia, particularly in the Catholic world.

He endorsed a campaign to defund abortion in the E.U. in 2013, denounced pro-abortion legislation in Mexico City, and backed pro-lifers as they rallied against it.

Pope Benedict XVI congratulated the Nicaraguan government in 2007 for banning all abortions, and later praised Malta for doing the same.

As Luxembourg debated a bill to legalize euthanasia, he condemned the legislation and the “evil” practice, calling on the predominately Catholic country to “reaffirm the greatness and inviolable character of human life.”

And unlike his successor, Benedict XVI had no love for pro-abortion politicians – a fact Nancy Pelosi discovered when he publicly embarrassed her with an unusually firm rebuke.

Just days before Brazil’s 2010 presidential election, Benedict took clear shots at the country’s Labor Party and presidential candidate Dilma Rousseff in an address urging Brazilian bishops to speak out against abortion. He bluntly condemned “political projects” that “contemplate the decriminalization of abortion,” as the Labor Party and Rousseff had.

A statement he had approved earlier as pope declared pro-abortion legislation “incompatible with participation in the Eucharist.”

“For them, as for every Catholic, it is impossible to promote such laws or to vote for them,” he stated.

In a memo to the U.S. bishops before the 2004 presidential election, the cardinal added that supporting “permissive abortion and euthanasia laws” requires denial of Communion, though that message was suppressed by the now disgraced then-Cardinal Theodore McCarrick and then-Archbishop Wilton Gregory, the Francis-appointed current head of the Archdiocese of Washington.

Benedict XVI: ‘The fundamental human right is the right to life’

Amid widespread confusion regarding abortion and end-of-life issues – often fomented by liberal Catholics – Pope Benedict XVI taught clearly about the preeminence of life.

He repeatedly stressed that life is the primary human right and the “foundation” of all the others.

“The fundamental human right, the presupposition of every other right, is the right to life itself,” he proclaimed. “Respect for life is the first form of justice that must be applied.”

As such, Benedict identified abortion and other attacks on “nascent human life” as the world’s “gravest injustice” and an existential threat to humanity. “Guaranteeing the right to life is a duty upon which the future of humanity depends,” he warned.

The pope further insisted that all people have an obligation to defend the sanctity of life “because it is fundamental with respect to other human rights.” “It is necessary that society as a whole must defend the conceived child’s right to life,” he said.

Benedict also strongly rejected attempts to undermine the cause of life by overemphasizing other social issues.

Any advocacy for social justice or the environment must be “inseparably united back to the moral teaching of the Church’s defense for life,” as he reminded the bishops of Switzerland.

“Only if human life from conception until death is respected is the ethic of peace possible and credible,” he said, adding that activism becomes a “substitute for religion” otherwise.

The unborn – “the poorest of all human beings” – have a special claim on the Church’s ministry to the poor, Benedict affirmed.

“Love for all, if it is sincere, naturally tends to become a preferential attention to the weakest and poorest,” he noted at the Vatican’s 2010 prayer vigil. “In this vein we find the Church’s concern for the unborn, the most fragile, the most threatened by the selfishness of adults and the darkening of consciences.”

The pro-life pope also didn’t shy from acknowledging the root cause of abortion: “widespread hedonism.”

A long legacy of life

Even before Pope Benedict XVI rose to the papal office, the defense of life was a recurring theme of his ecclesiastical career.

At a pro-life convention in 1986, Cardinal Ratzinger warned that abortion jeopardized “the very bases of any authentic democracy,” a point that he would stress during his pontificate as well.

As head of the Congregation for the Doctrine of the Faith, Cardinal Ratzinger served as the architect of Catholic teaching against embryonic research and in vitro fertilization.

He authored the landmark 1987 pro-life instruction Donum vitae, which affirmed the infallibility of Church teaching on abortion, and oversaw the development of the Catechism of the Catholic Church, with its uncompromising pro-life language.

He later approved guidelines condemning the use of fetal cells in vaccine production and stating that doctors and fathers of families have an obligation to demand ethical alternatives. The guidelines also encouraged the use of conscience exemptions.

He reiterated that life begins at fertilization, not implantation, ruled that hospitals may not withdraw artificial nutrition or hydration from vegetative patients, and insisted that fetal anomalies, no matter how serious, can never justify abortion.

“The life of a disabled child is just as valuable and wanted by God,” declared the pope, whose mentally disabled cousin was murdered by the Nazis as part of their euthanasia program.

Pope Benedict’s record on life makes a sharp contrast with that of his immediate successor.

Pope Francis has admittedly spoken less about the issue and blatantly downplayed it with comparisons to immigration.

The Argentinian pontiff has all but abandoned the defense of life in the political realm as well. He remained largely silent about Ireland’s devastating 2018 abortion referendum and even the legalization of abortion in his home country.

In contradiction to Benedict, Francis has also praised pro-abortion politicians, like former Italian abortionist Emma Bonino, and backed giving them Holy Communion. Pelosi’s warm treatment last year at the Vatican, where she received Communion despite a ban by her local archbishop, was a far cry from 2009.

Pope Francis has furthermore gutted the Pontifical Academy for Life – once a beacon of orthodoxy – purging Benedict and John Paul II’s conservative appointees and systematically stacking it with abortion supporters, to the outrage of Catholics and pro-lifers around the world.

The current pope similarly promotes prelates who align with his approach to abortion, like Wilton Gregory and Cardinal Blase Cupich.