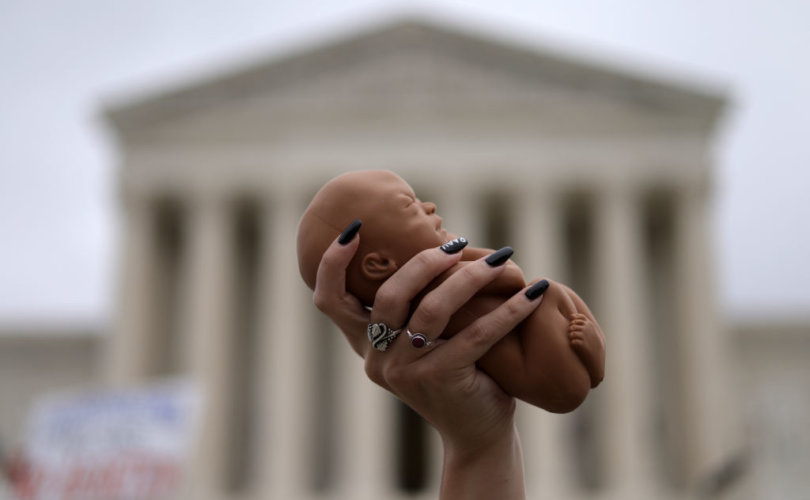 A pro-life activist holds up a baby doll during a rally for a ban on abortion in front of the U.S. Supreme Court October 12, 2021, in Washington, D.C.Photo by Alex Wong/Getty Images

LAKE ODESSA, Michigan (LifeSiteNews) — Police are investigating the shooting of an 84-year-old pro-life volunteer after a tense conversation.

“On Tuesday, September 20, one of our local volunteers from Lake Odessa was shot while going door to door in her community to have conversations about Proposal 3,” Right to Life of Michigan announced.

Proposal 3 is a ballot initiative pushed by radical pro-abortion groups. It would legalize abortion up until the moment of birth and enshrine the killing of preborn babies as a right in the state constitution.

“The 84-year-old victim said that she was shot in the back/shoulder while leaving a residence during a heated conversation, and that the man who shot her was not a part of her conversation,” the group stated. “The victim does not know the identity or motive of her shooter. The victim is still recovering from her gunshot wound and wishes to remain anonymous while the criminal investigation proceeds.”

A spokesman for the Michigan pro-life group told LifeSiteNews the volunteer is recovering.

“She is at home and doing OK. She’s able to drive and go places, but I don’t think she’ll be making our conference this week,” Chris Gast told LifeSiteNews via email on Monday. “She has been volunteering with pro-life stuff for a very long time.”

Communications director Anna-Marie Visser added that there are no “updates on the investigation at this time.”

“We are still waiting for the police report to be released to the public,” Visser said in her email on Monday.

Abortion supporters have turned to violence before when facing pro-lifers who offer information about an upcoming election.

A violent pro-choicer attacked a pro-life teen in Kansas in August after a brief and peaceful interaction with a different household member about the Value Them Both Amendment. The woman’s daughter became upset at the mere presence of the 18-year-old Students for Life Action volunteer and shoved her in the chest with both hands and began beating her on the head with her closed fists.

She attempted to protect herself and leave while the resident’s mother told her daughter to stop the violence.