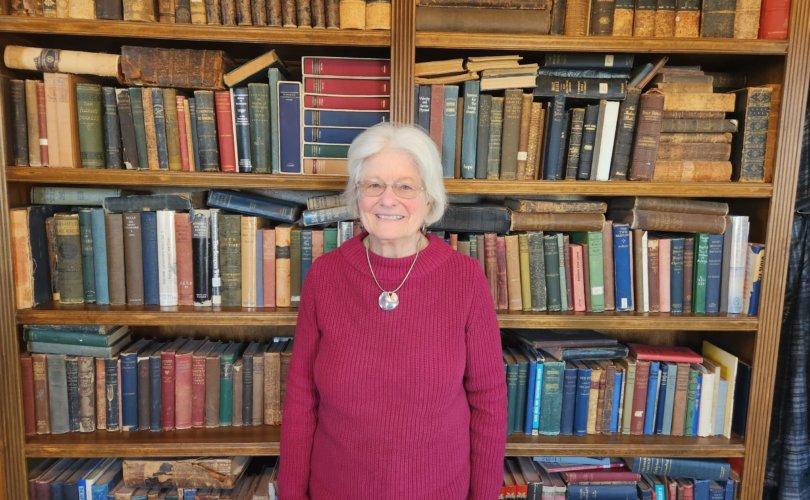 84-year-old Joan Jacobson, who was shot while canvassing against abortion in Michigan.Mary Margaret Olohan / Twitter

(The Daily Signal) — Eighty-four-year-old Joan Jacobson never imagined she would be shot when she knocked on the door of a Michigan couple’s home, hoping to convince them not to vote for a local pro-abortion ballot proposal.

Sharon Harvey answered the door and quickly became “hostile, belligerent, and antagonistic” when she learned Jacobson’s mission, according to David Kallman, Jacobson’s attorney with the Great Lakes Justice Center.

A social media account that appears to be Harvey’s features content strongly pro-abortion and heavily critical of Republicans. She did not immediately respond to requests for comment from The Daily Signal.

In a Thursday phone interview with The Daily Signal, Jacobson insisted that Harvey refused to listen to her, yelling over her, and finally ordering her off the property. The 120-pound woman, who stands at five feet tall, said that Harvey followed her down the porch, onto the sidewalk, continuing to yell at her, before her husband Richard Harvey appeared in the yard carrying a .22 caliber rifle.

“When that registered in my mind, I heard a shot, I felt some pain, and I thought he had hit me in the back,” she said. Jacobson learned at the hospital that the bullet allegedly went through her shoulder and out her back, very narrowly missing her spine. “I was just in shock. I said to myself, ‘Did I just get shot? Did he just shoot me?’”

“They didn’t say anything,” she said. “I didn’t say anything. I just headed back to my car and tried to ascertain if I could drive… I didn’t feel lightheaded or like I was going to pass out or anything. I thought, ‘I gotta get out of here.’ I got into the car and they were standing by the sidewalk, I looked through the car window, and I had a thought that went through my mind, I thought, ‘This guy is going to shoot me again through the window of the car!’ He didn’t, and I was able to get the car started, get into gear, get on the road.”

The 84-year-old woman said she drove to a nearby police station, saying that the next thing she knew, she was whisked away in an ambulance to a Grand Rapids hospital. Both Jacobson and her attorney expressed shock to The Daily Signal that the Harveys did not express concern or offer assistance to the wounded woman – though Sharon Harvey was reportedly holding her cellphone in her hand and had threatened to call authorities earlier in the altercation.

“I do think that he knew what he was doing,” she said. “I think it was intentional.”

The only time during the altercation that Jacobson believes she raised her voice was when she told Sharon Harvey, “Stop following me,” as she walked away from the house.

The Harveys have spoken to local media outlets about the incident, which Michigan State Police are reportedly looking into. Authorities did not immediately respond to requests for comment from The Daily Signal.

The couple disputes Jacobson’s claims and said that 74-year-old Richard Harvey, observing his wife and Jacobson loudly arguing, shot Jacobson accidentally after firing a warning shot into a pine tree in his front yard.

“She [the volunteer] is still ranting and raving and she’s got this clipboard,” he told the local outlet WoodTV. “She’s waving it around. I’m thinking she’s going to smack Sharon with it. So without thinking, I went to club it away with the rifle and my finger was still in the trigger guard. It went off and hit her about in here.”

Jacobson told The Daily Signal that she was not waving her clipboard at all or attempting to hit Sharon Harvey. She also said she was not yelling and screaming.

“I do think he should be charged with something,” Jacobson said, sounding a little bewildered. “I don’t think that people should feel like they can’t go and talk to their neighbors without feeling like they’re going to get shot at. Whatever the law says for somebody who intentionally is shooting at somebody. I know a lot of my friends are telling me that they think he meant to kill me. I’m not going to go that far. I don’t know. I just think he wanted to hurt me.”

The pro-life activist shared that she is very politically involved and is a Sentinel for Heritage Action (The Daily Signal is the news outlet of The Heritage Foundation). The incident has made her think twice about her canvassing.

“I’m going to continue to help as much as I can,” she said, adding, “Yeah, I’m reluctant… they do tell you, don’t go alone, go with two. And at this point in time, I’m definitely telling my pro-life friends, take somebody with you and you have a camera, your cellphone with a camera, and that you can take pictures.”

“There was no justification for shooting Ms. Jacobson,” Kallman said in a statement. “Mr. Harvey admitted firing a warning shot, so he knew the gun was loaded when he pointed it at my client. If it was truly an accident, why did neither of the Harvey’s express any remorse or even offer to assist Ms. Jacobson or call 911 immediately after shooting her? The answer is obvious: it was not an accident and Mr. Harvey should be held accountable.”