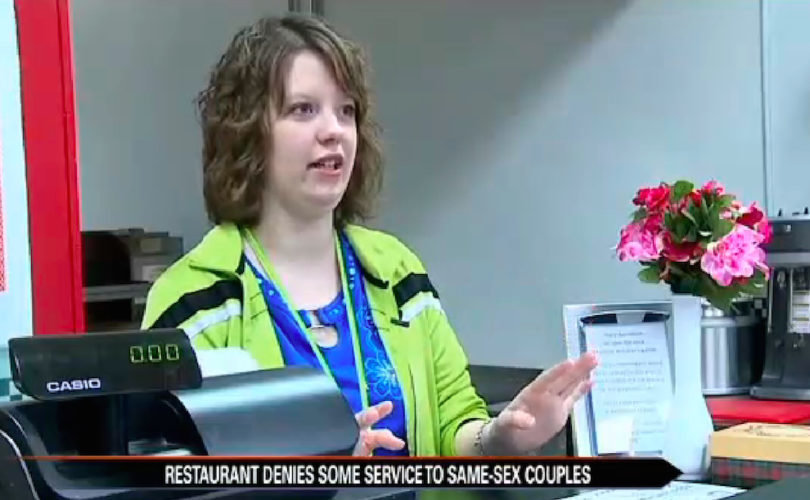 It all began when a local television station interviewed Crystal O'Connor at Memories Pizza.ABC57 video screenshot

WALKERTON, IN, April 8, 2015 (LifeSiteNews.com) — Last week, the O'Connor family was targeted with death threats and online harassment that forced them to close the doors to their pizza restaurant. This week, Memories Pizza may be able to reopen thanks to tens of thousands of donations from social conservatives — and at least one lesbian who has publicly defended the family's right to religious liberty.

The O'Connors' story started when a local news reporter asked if they would theoretically reject service for a gay wedding ceremony. The owner, Kevin, said that while the restaurant serves all customers, they would not be able to participate in a same-sex ceremony.

Militant gay activists subsequently targeted the family with death threats, viciously negative online reviews of the restaurant, and other harassment — forcing the O'Connors to close the business they had owned for nine years.

Thanks to several people associated with Dana Loesch's television program, however, the owners have received nearly $850,000 to help them out, including $20 from one lesbian who says she supports religious liberty.

According to Loesch contributor Lawrence Jones, “[Loesch] producers Rachel, Allison and George discussed the situation with Dana, myself and head writer Ben Howe. We all agreed: this family needs help to get through this assault.”

“So we set up a GoFundMe page with the modest goal of $25,000. The intent was to help the family stave off the burdensome cost of having the media parked out front, activists tearing them down, and no customers coming in,” wrote Jones on the GoFundMe page launched for the O'Connors.

More than 29,000 people donated to help the small business owners — including at least two people in same-sex relationships.

Courtney Hoffman, who donated $20, wrote in a note to the O'Connors: “As a member of the gay community, I would like to apologize for the mean spirited attacks on you and your business. I know many gay individuals who fully support your right to stand up for your beliefs and run your business according to those beliefs. We are outraged at the level of hate and intolerance that has been directed at you and I sincerely hope that you are able to rebuild.”

Likewise, Buz Smith donated $250, and wrote, “My partner and I have been together almost 27 years. The Democratic Leadership hi-jacked the Gay community many years ago and continue to spew the intolerance of religion as the ypromote [sic] the tolerances of their choices. This is noe [sic] big community-organized ploy with the media to do harm to people with religious convictions, conservatives, capitalism on and on. Love Peace and Happiness to the Family!!!!”

Additionally, homosexual members of a church near the O'Connors' restaurant sang in front of the building. According to WSBT-TV, the group's choir director told the local news organization that “there are a lot of hurt people. There are a lot of angry people. I'm really hoping we can just find some common ground.”

“We're not here to condemn or condone the owners of the establishment,” said the director. “We're here to show them and the community that we can show love to people in spite of our differences.”

A spokesperson for the pro-same-sex “marriage” organization Human Rights Campaign told LifeSiteNews that the organization does not have a public statement about the treatment of Memories Pizza by gay activists. A request for a statement was not responded to by press time.

A similar fundraiser has been held for florist Barronelle Stutzman, a 70-year old business owner in Washington State who was fined $1,000 for declining to serve a customer's same-sex “marriage” ceremony. The state's attorney general prosecuted Stutzman under state laws that a court agreed do not allow religious liberty when it comes to homosexual relationships.

That GoFundMe effort for Stutzman has raised more than $135,000.

Another business that was targeted, this time by a social conservative, is Cut the Cake in Florida. According to the owners, who have raised more than $14,000 in five days in their own GoFundMe effort, they have received hateful messages and death threats after declining to make a cake saying “We do not support gay marriage” for activist Josh Feuerstein.

Feuerstein immediately publicized the effort, which Sharon Haller says has led to “hundreds of phone calls and … very nasty and negative gestures towards our business, towards us.” Mediaite, a liberal media watchdog, reports that Feuerstein took down a video of his call, which identified Cut the Cake, at the request of the restaurant's owners, though Cut the Cake posted it online.

However, a spokesperson for Cut the Cake who answered the phone when called by LifeSiteNews said that the owners of the business had not had any communication with Feuerstein. Asked if Feuerstein had contacted the business randomly, or because of past activism of any kind, the person indicated she thought they were chosen at random.