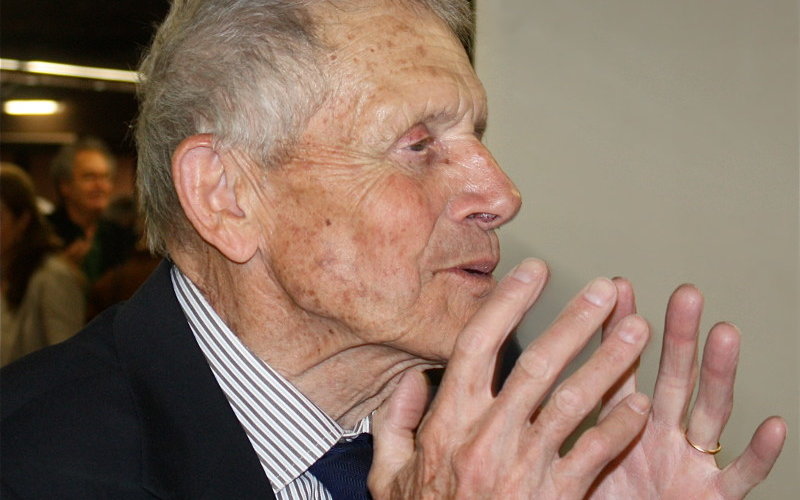 85-year-old French pro-lifer Xavier Dor was fined 5,000 euro ($6,350) Monday by the Appeals Court of Paris for having exerted “moral and psychological pressure” to dissuade a woman from having an abortion.

In 2012, the frail, almost blind, medical doctor, pediatrician, and researcher had given tiny knitted baby shoes to a woman who was approaching a Planned Parenthood center in central Paris.

The court also imposed a suspended fine of 5,000 euro, payable in case of a repeated offense, and awarded 750 euro damages to each of the three pro-abortion associations that had introduced the judiciary proceedings against Dor.

The Appeals Court was less severe than the criminal chamber of the Paris tribunal, whose judges went beyond the public prosecution’s demands, ordering a 10,000 euro fine in September last year as well as 2,000 euro damages for the young woman Dor met on the stairs leading to the Planned Parenthood center.

Dor is a veteran pro-lifer who, at the head of the association SOS Tout-petits, has led many protests and prayerful demonstrations near abortion facilities.

He told LifeSiteNews he was “surprised” by the reduced sentence, given the present context in which abortion has become a fully-fledged right in France, and is 100 percent refunded by the state-run Social Security.

Nevertheless, Dor has decided to take the affair to the Court of cassation, which is in charge of verifying the correct interpretation of the law. This case is actually one of the very first judgments regarding “moral and psychological pressure” with the intent of “hindering abortion.” This offense is of relatively recent invention: it qualifies strictly non-violent actions that can take place in any location, not necessarily close to a hospital or clinic where abortions are performed.

In this case, Dor twice entered the Planned Parenthood center. At this center, information can be obtained about contraception and abortion – including advice for women who are beyond legal term of abortion – but, contrary to the US, no abortions are performed there.

On the first occasion, on June 25, 2012, he entered the offices with another person and was able to speak with the person in charge, explaining why he was against abortion. Next day he returned alone: this time, a staff meeting was under way and he was brusquely expelled from the premises. It was while he was going down the common staircase of the building where Planned Parenthood has its offices on the first floor that he met a woman going up. He stopped her and offered her a Miraculous Medal of the Virgin Mary and knitted baby shoes, which she accepted.

The woman told the story at the Planned Parenthood offices and together with that association, as well as several professional pro-abortion and contraception unions, sued Dor because of the “extreme violence” of his words. As a Catholic and mother of three, she said, she had been “deeply shaken.”

During the appeals hearing, the public prosecutor supported her claim for damages and demanded that the first judges’ harsh sentence be confirmed: “He should realize the moral harm he’s been doing. It’s about time for him to stop. As a pensioner, he should find other occupations and let these women settle their own difficult questions of conscience, with all the heavy suffering they entail and that should not be increased,” he said.

As for the Planned Parenthood association and CADAC (National Coordination of Associations for Abortion Rights), they both asked for heavy damages, because, they said, sending Dor to prison would not help nor induce him to stop his fight against abortion. The offense of hindering an abortion carries maximum penalties of 2 years imprisonment and a 30,000-euro fine, as well as possible civil damages for the plaintiffs.

Both associations underscored that a fine would hurt Dor more than a prison sentence – he has already spent several months in prison for having prayed near abortion mills – and added that in these times of budget cuts their public funding is going down: why shouldn’t Dor help them get back some of the money they are no longer receiving from the State?

Both the local and national Planned Parenthood association as well as the CADAC were awarded 750 euro each. On the other hand, the woman in the case gained no damages at all, where the first judges had awarded her 2,000 euro for “moral harm” in September last year. Strangely enough, it was never made clear whether or not she was contemplating abortion on that day in June 2012, neither did she disclose whether she actually underwent an abortion then or at any other time. During the appeals hearing last month, she broke down during her testimony when her lawyer asked her to describe her feelings when Dor offered her the baby shoes.

It is therefore also unclear whether Dor can be understood, under the logic of the law, to have obstructed an abortion in a case where it is not even certain that there was a pregnancy.

This did not stop the judges from following the plaintiffs’ arguments. Claude Katz, representing Planned Parenthood, put it in portentous terms: “The right to abortion was obtained thanks to a long struggle. It is one of the most important advances of humanity. Your fight has already been lost. The Court’s decision cannot allow for the presence of a higher interest over and above the law.”

Another lawyer for the plaintiffs called Dor an “unworthy old gentleman” whose sole objective was to “hurt” and “cause suffering.”

Dor told LifeSiteNews: “The fine won’t stop me from defending life, there is more than one way to do so and we shall continue to demonstrate for the rights of the unborn.”

He added that while he was happy to note that the initial fine had been reduced by half, he considers “even a cent would be too much to pay for the right to defend innocent lives.” If necessary, he is prepared to take the affair before the European Court of Human Rights.