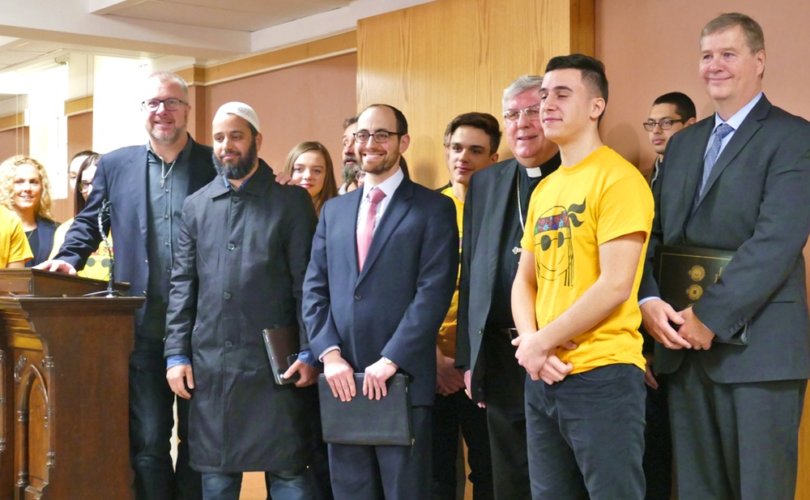 “The promise of a free and democratic society is that there be no religious or ideological test or conditions to receiving government benefits or protection,” they wrote in a January 25 open letter to Prime Minister Justin Trudeau and Employment Minister Patty Hajdu. The letter was released at a Thursday press conference at St. Benedict’s Catholic Church.

The faith leaders say that they can’t sign the attestation. As a result, their charities and ministries won’t be able to access public funds to hire students to staff numerous programs, such as inner-city camps for poor children.

Hajdu and Trudeau have so far defended the policy, which requires that employers applying for Canada Summer Job grants sign an attestation that their “core mandate” respects “reproductive” and transgender “rights.”

Hajdu told an Ottawa press conference Thursday she doesn’t intend to remove or alter the attestation, the Catholic Register reported.

However, faced with a mounting backlash from faith groups, a drubbing in the media, and a pending Charter challenge, Hajdu’s ministry released “supplementary information” on the attestation earlier in the week.

It attempts to define terms in a way that will smooth over the controversy, and includes examples of what jobs the Liberals will fund, but does not change the wording of the attestation. Hajdu said earlier this week she introduced the attestation because of complaints last year that pro-life and pro-family groups were receiving summer job grants.

“If the government has a difficulty with a particular group doing something which they feel is not acceptable, I would say they should talk to that group,” Cardinal Thomas Collins of the Archdiocese of Toronto said at Thursday’s press conference.

“But to put a kind of a wide-open ideological test for everybody, which we cannot in conscience sign, I think that’s just not fair,” he said.

The archdiocese typically applies for funding for some 150 summer jobs under the program, which has a budget of $241 million to fund 70,000 placements across the country.

“Are you saying none of [the] faith groups you represent will be denying jobs to LGBT youth or employing youth to hand out anti-abortion materials?” a Canadian Press reporter asked.

“Our concern is what we’re dealing with here is a kind of ideological test,” Collins replied.

Hajdu’s position, “at the moment at least, I hope she’ll change it, is, don’t worry, we don’t mean you, we mean some other people, but check the box, you’re okay,” Collins told LifeSiteNews.

“I don’t think she appreciates that we can’t,” he added. “We can’t attest that we’re in favor of ‘reproductive rights,’ which are defined as access to abortion. We don’t believe in that. It’s a free country.”

Rabbi Chaim Strauchler of the Shaarei Shomayim Modern Orthodox congregation of Toronto made much the same point.

“It’s worth thinking about the temptation of power that is taking place here,” he said.

The Liberal government “is asking all Canadians, in order to participate in a government program, to attest, to make a statement of who they are,” Straucher said.

“What other attestation can we expect as Canadians in the future?” he asked. “There are all sorts of partisan issues a government can take a position on. We are diverse as Canadians. We should not be asked to attest in order to become approved for a government program.”

Faith institutions are “defined by our theology, by our beliefs and our practice,” and so take attestations “very, very seriously,” said Bruce Clemenger, president of the Evangelical Fellowship of Canada.

“Why are we even being asked this?” Clemenger said, adding that the Liberals can “delineate what activities they are willing to fund or not fund.”

Imam Refaat Mohamed of the Canadian Council of Imams said the attestation is “undefined” and “confusing to faith communities.” The CCI will work to “make sure this attestation is amended or removed,” he said.

Dave Addison, executive director of the Toronto City Mission said that because his Christian mission can’t sign the attestation, it faces a shortfall of $100,000 to pay 16 students to staff summer camps in Toronto’s inner-city.

The mission is already operating at a deficit, having decided last year to offer the camps for free because many of the families they serve can’t afford to pay any fee,” Addison said.

“We continue to plan, we hope that we’ll be able to run the camps. We go beyond hope because as Christians, we pray,” Addison said.

“We love the widow, the orphan, the refugee, the poor,” he said. “We ask the government to remove the attestation and allow us to do our loving work.”

See the full text of the letter here.