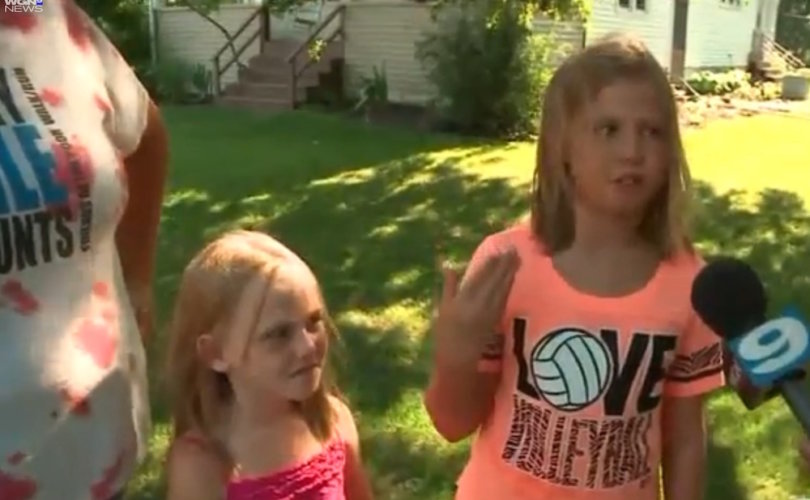 LOWELL, Indiana, July 13, 2016 (LifeSiteNews) — Sheriff’s officers have named an abandoned newborn “our miracle baby” and the little girl who found the newborn a “guardian angel.”

The girl's mother took the baby into her home and called authorities.

“If you think about it, if that 9-year-old had not gone out in that yard to play, what a tragic result could have occurred … to abandon a baby like this almost 100 yards from the road,” Lake County Sheriff John Buncich said.

The baby was found wrapped in a blanket in a wooded area near U.S. 41 and Indiana Route 2. Sheriff Buncich speculated that with the placenta and umbilical cord still attached, the baby might have only been hours old.

“We’d like to locate the mother,” he said, adding that police searched the area with dogs and a helicopter but haven't found the woman. “There are laws in the state of Indiana that allow someone to give up a baby at a public place, like a fire station, a police station, without any consequence.”

Monica Kelsey, who champions Safe Haven Baby Boxes so that frightened and overwhelmed women can drop off a newborn without fear of prosecution, told LifeSiteNews, “We are saddened to hear that this young mother didn't take her newborn to a safe haven location in Lowell, Indiana, but instead abandoned her in a unsafe place. … This is precisely why we have launched Safe Haven Baby Boxes in Indiana and eventually nationwide, so these young mothers have a last resort option of placing their newborn in a safe place and doing so completely anonymously.”

“The Safe Haven Baby Box triggers a call to 911 three different times, and the newborn is picked up in two to five minutes after they are placed inside the box,” Kelsey, who was abandoned as an infant, explained. “The mother walks away knowing that her child will be taken care of, and the child gets a chance to be adopted and loved.”

“As a person who was abandoned as a newborn without the protection of the safe haven law, we have to do more for these women before they get to the point of abandoning their newborn. We hope that through our crisis hotline (1-866-99BABY1) we can reach these young mothers and get them the help they need at a crisis pregnancy center before they get to the point of surrendering.

“The goal of safe haven baby boxes is to not only save the child's life but to also show this young mother love and guidance through this very trying time.”

Sheriff Buncich said at a press conference that the full-term baby is sunburned but healthy and in good condition.  Indiana Child Protective Services is in the process of placing the child in a foster home.