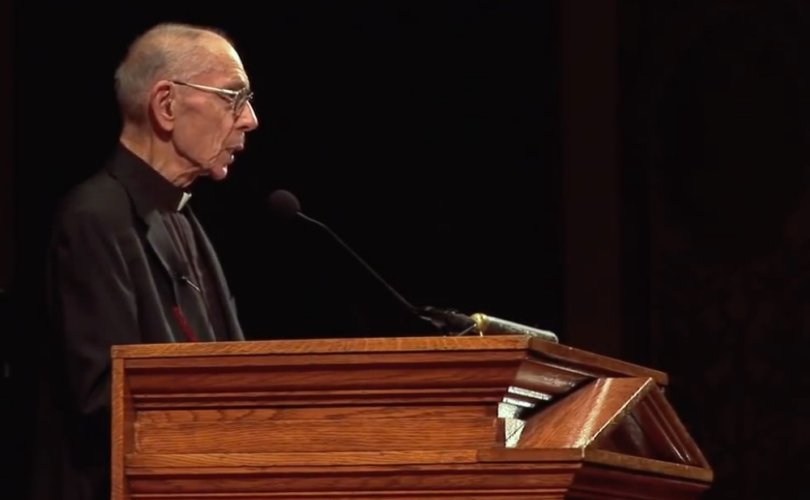 October 12, 2018 (LifeSiteNews) – The biggest crisis in the Catholic Church right now is not whether bishops, cardinals or priests are sinners, a noted priest and author said. It is whether the Church will uphold its own teaching. And at the center of the crisis is Pope Francis.

“The Church is being watched to see if it upholds the natural law in its own teachings and practices,” Jesuit Father James V. Schall said, “or whether it joins the world and thereby undermines its claim to consistency and truth of doctrine since its beginning.”

The magazine’s report criticized Pope Francis’s leadership of the Church and charged him with ignoring abuse survivors in Argentina. It had the subtitle, “The Greatest Crisis in the History of the Church.”

Catholics have voiced anger and increasingly called for answers in the Church’s sexual abuse scandal after allegations surfaced beginning in June that former Cardinal Theodore McCarrick abused seminarians, young priests and at least one minor over decades.

The McCarrick revelations were followed by the Pennsylvania grand jury report released in August detailing abuse by some 300 priests over 70 years in six dioceses there.

Later in August, former papal nuncio to the U.S. Carlo Maria Viganò released testimony implicating Francis and other high-level prelates in covering for McCarrick. Viganò has been in hiding since.

Francis initially stated he would not say “a word” about the allegations, and then proceeded to cryptically criticize an unspecified “Great Accuser” repeatedly in his Mass homilies.

The McCarrick scandal has brought Francis’ handling of sex abuse under greater scrutiny.

At the same time concerns persist over his leadership with regard to Church teaching on sexuality and marriage – owing to his apparent departure from the teachings of his predecessors, especially in the outcome of the Synod on the Family and its resultant exhortation Amoris Laetitia that has been used to allow Catholics living in objectively sinful situations to receive Holy Communion.

Most people want to be fair to the pope and they also want to know the facts, said Schall, both in his handling of abuse in Argentina, and also with regard to the McCarrick case.

“People are also puzzled by the pope’s refusal to answer what seem to be quite legitimate and straightforward questions about what he teaches,” he said. “Common sense would normally suggest that, if someone is not guilty, he would be anxious to state why, to clear the record, as it were. The pope’s silence, fairly or unfairly, suggests to most people of good will that something was covered up, something is not quite right.”

Whether or not the saga broached by Der Spiegel actually constitutes the “greatest crisis” in Church history, Schall said, “it certainly is a crisis of major proportions that challenges the credibility of the Church on its own terms.”

“Pope Bergoglio himself seems willing to talk about almost every subject but his own beliefs and record,” he said. “They seem most at issue. The crisis at this stage, whether we like it or not, is precisely about the present pope, what he believes and which decisions he made.”

“It is not directly about whether Catholicism is objectively true or not,” he continued. “Rather it is a question of whether the Catholic Church, in its own testimony about itself, is consistent with its own teachings.”

By suggesting that this crisis is the “greatest” in the Church’s history, Der Spiegel is taking the Church at its own word, wrote Schall.

“It is not due to some barbarian invasion, a Masonic plot, or some other outside force imposing on it or threatening it,” said Schall. “It is being threatened by its own ministers not only for not living according to Christian moral standards but also in not teaching what is good.”

The priest philosopher continued, “The irony, to be specific, is that disordered man-man sexual relations have become a civil “right” in many countries but the same relationship is a natural law aberration according to Church teaching.”

“The world watches to see if the Church will join the world in approving these relations as “rights” in the public order and in the Church,” said Schall. “Or will it reject them?”

It is reasonable to ask what the Church’s ‘greatest’ crisis would be, he wrote.

“It would have something to do with pride, as in placing a human opinion over a divinely revealed or rational teaching,” stated the priest. “It would have to be an embracing of “this world,” spoken of in John’s Gospel as a world that rejects Christ’s coming and his Cross.”

Scripture passages in 2 Timothy and Matthew 25 also signal that a serious crisis can flare up when “unworthy priests and prelates are found within the Church itself,” Father Schall said.

He cited other examples, such as Francis himself often speaking of clericalism and Pharisees in the Church, Pope Paul VI’s speaking of the “smoke of Satan” in the Church, and Ezekiel and St. Augustine giving warnings that “unworthy shepherds might prevail among us.”

“On the other hand, at least the papacy was supposed to have been a place where “the gates of hell” did not prevail,” said Schall. “Popes could be sinful in their personal lives but still would not teach false doctrine or approve immoral activities.”

Therefore, he said, the “greatest crisis” of the Church, is not the discovery that clerics are themselves sinners.

“Christ was sent not for the just but the unjust. He was sent to grant forgiveness to whoever asked for it,” the priest wrote. “But he also told us to stop sinning. Therefore, the fact that sinners populate the world and the Church, even after Christ established rules to live by, cannot surprise anyone.”

Even those who do not think the “aberrations” some priests and bishops are accused of committing equate to sins or disorders recognize that “the Church is the last bastion of moral integrity as seen in its classical philosophic and religious form,” he said.

And, he said, they also see that the serious troubles the Church itself is in are primarily due to its own actions.

“We can say that the issue is not over whether the pope is a sinner, naïve, or weak, but whether he has approved teachings or moral behaviors that he is obliged to oppose,” said Father Schall. “If he has taken this step in some obviously authoritative way, then Der Spiegel will be proved right.”

“A reversal of fundamental teaching at the highest levels of the Church would constitute the “greatest crisis” in Catholic history,” he said. “It is an act of faithfulness to respectfully hope Pope Francis clarifies his own teachings. It does not seem like too much to ask and many, including Der Spiegel, are asking it.”