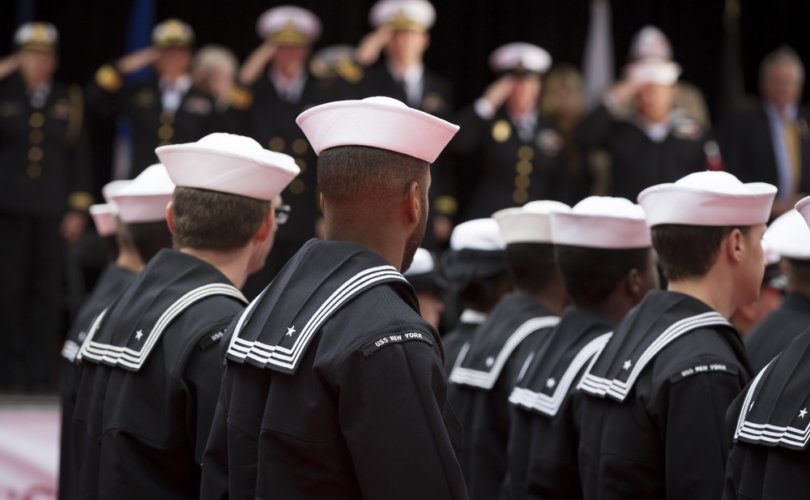 (LifeSiteNews) — More than 900 U.S. Navy service members have been discharged from service to date for bucking orders to get the experimental COVID-19 injections, according to a May 11 report by the military branch.

Of the 924 sailors kicked out for their refusal to get the jabs, 836 were active duty personnel and 66 were in the reserves.

All service members booted for rejecting the injections were given an “honorable characterization of service,” the Navy stated.

Each of the military branches set their own deadlines for compliance with the directive. The Navy mandated that active-duty sailors become fully jabbed by the end of November 2021 and reservists were ordered to get the shots by the end of December.

The Navy began discharging members for bucking the jab mandate beginning in January 2022.

In its May 11 update enumerating the service members kicked out for refusing to take the shots (which have proved increasingly less effective against the coronavirus than promised and have contributed to a staggering number of adverse event reports), the Navy explained that those sailors who object to the shots for religious reasons and have submitted religious accommodation requests “may no longer be separated for vaccine refusal.”

The Navy was forced to stop discharging members with religious objections in March after a federal judge granted a preliminary injunction in a class action lawsuit brought against the Department of Defense by 26 Navy SEALs and others.

“This now means 4,095 sailors, who submitted religious exemption requests and are part of the class, cannot be separated under the preliminary injunction,” USNI News reported.

Ten religious accommodation requests for Navy personnel in the Individual Ready Reserve (IRR) have also been approved, but those sailors are still being required to get the shots in order to return to service.

As of the May 11 update, 3,357 active-duty members and 859 Ready Reserve personnel have submitted requests for religious accommodations from the jab requirement.

The Epoch Times pointed out in a May 10 article that among the U.S. military branches, the Navy has let go the “second-highest number of personnel” for refusing the shots since imposing its mandate.