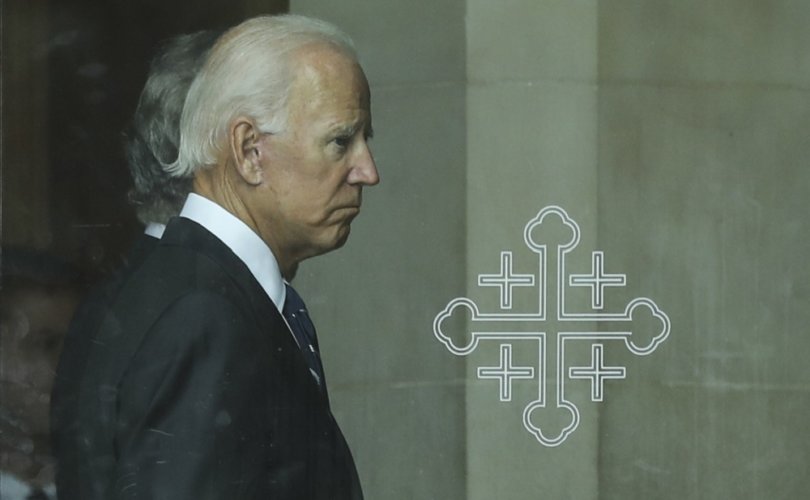 “The organization also announced that it has full-time staff in 6 states and over 2,000 community captains representing unique Catholic parishes across these states, and thousands of volunteers,” a press release stated. “CatholicVote plans to reach over 5 million active Catholics in battleground states during this election cycle.”

A 30-second ad released by CatholicVote features Sister Dede Byrne of the Little Workers of the Sacred Hearts of Jesus and Mary saying, “Biden-Harris, the most anti-life presidential ticket ever.”

CatholicVote president Brian Burch said, “Joe Biden’s record makes clear he will not protect our Catholic values or defend our way of life. For Catholics who cherish the Faith and their freedom to live it, a Biden presidency represents an existential threat.”

“Catholics are less focused on Joe Biden’s claims about his personal faith, and instead on what his policies would do to the culture, and their freedom to live out their own beliefs,” he added.

In this endeavor, Catholics are aided by the 93-page “Biden Report.” CatholicVote compiled Biden’s record and agenda on several key issues for Catholic voters, abortion being the pre-eminent issue.

“Joe Biden’s record on the sanctity of life, more than any other, most fully represents his transformation in public life, away from the core tenets of Catholic belief,” the report concluded.

“Early in his Senate career, Biden was critical of Roe v. Wade saying it ‘went too far’ and voting to allow states to set tougher abortion restrictions than the federal government,” according to the document. “In the 2000’s, Biden began to shift to the left saying it was not one of the most important issues in the country. Today, as a presidential candidate, Biden says he would permanently codify Roe v. Wade into law.”

Roe v. Wade is the 1973 Supreme Court ruling imposing legal abortion across the country under the guise of a woman’s right to privacy.

A similar shift occurred in relation to the Hyde Amendment, which prohibits federal funding for most abortions, excepting those that are said to save the life of the mother and those committed against children conceived from rape or incest.

“Biden was likewise a longtime supporter of the Hyde Amendment, bragging in 1994 that he had voted for it on ‘no fewer than 50 occasions,’” CatholicVote pointed out. “In 2019, Biden fully surrendered his previous stance after facing only ‘two days of intense criticism.’ Joe Biden now represents the most pro-abortion presidential nominee in American history.”

All claims made in the report are backed by numerous lengthy quotes from Biden.

On the issue of religious liberty, CatholicVote wrote, among other things, “In addition to the HHS Mandate, the Obama-Biden administration sought to prohibit faith-based foster care and adoption agencies from receiving federal funds. The administration also opposed the ‘ministerial exception’ which allows religious institutions to make employment decisions consistent with their beliefs.”

Regarding marriage, the report found that before the Obama presidency, “Biden supported civil unions but not marriage for same-sex couples and said he thought the government could not dictate the definition of marriage to religious institutions.”

CatholicVote also criticized Biden’s position on health care. President Obama had required required religious organizations “to cover the cost of contraceptives, sterilization and abortion-inducing drugs, which are contrary to their religious beliefs. Biden objected to the mandate, but claimed during his 2012 vice presidential debate, it would not force Catholic health care providers to be a vehicle to ‘get contraception in any insurance policy they provide.’”

In reality, “Hobby Lobby and the Little Sisters of the Poor were forced to take their cases to the Supreme Court to push back and Biden now calls for re-imposing the contraceptive mandate to its pre-Hobby Lobby ruling state.”

The “Biden Report” also looked at several other issues, including the nomination of judges, the dignity of work, education, and immigration.

Catholic voters are not one monolithic bloc either political party can count on.

Data provided by the Center for Applied Research in the Apostolate following the 2016 presidential election showed that 48 percent of Catholics voted for Hillary Clinton and 45 percent for Donald Trump.

The Pew Research Center had said that Trump received 52 percent of the Catholic vote, while Clinton came up with 45 percent.

Exit polls like these generally don’t take into account if somebody is a practicing Catholic who accepts Church teaching or simply a person who was baptized but doesn’t live the faith.