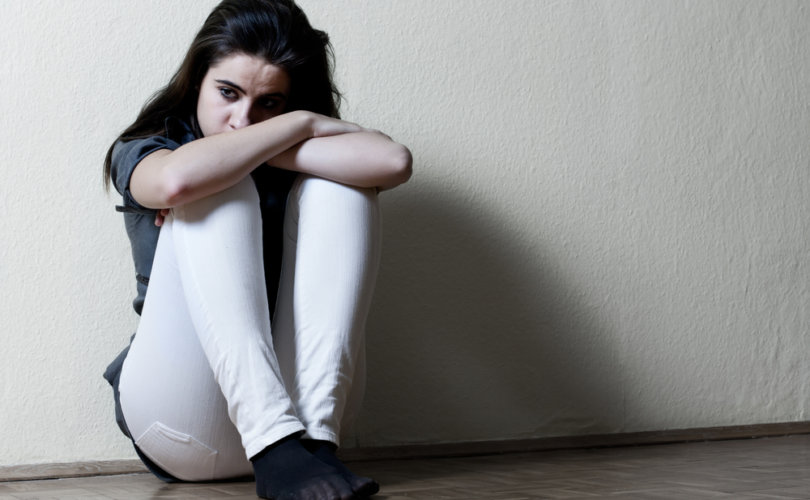 The pro-gay “Stonewall” school report for Scotland with the University of Cambridge shows 96 percent of the country’s transgender youth engage in self-destructive behavior, including cutting themselves. The report also found “incredibly high levels” of mental health issues in transgenders.

While 40 percent of Scottish trans pupils have tried to commit suicide, a quarter of homosexuals have, too.

Former transgender Walt Heyer of Sex Change Regret told LifeSiteNews that the tragic statistics from Scotland are not surprising.

“The Stonewall Scotland’s survey, which found 96 percent of trans students self-harm, is consistent with high rates of suicides and mental disorders reported among trans people for 50 years,” Heyer said. “My analysis, '50 Years of Sex Changes, Mental Disorders, and Too Many Suicides', supports the study.”

U.S. statistics are not much brighter for homosexual and trans young people. The largest survey of transgenders in the United States found nearly half were victims of sexual assault, 77 percent have been victims of partner violence, nearly 40 percent admit to serious mental health problems, and 40 percent have attempted suicide.

The gay Stonewall group suggested that more explicit, homosexuality-focused sex education is the solution to curb the “alarming” experiences of trans and gay students.

Heyer countered Stonewall’s argument that bullying and social rejection are the cause of transgender self-harm and suicide.

Heyer cited studies by Suicide.org that found both that people with mental disorders attempt suicide and that trans people have mental disorders. “Over 90 percent of people who die by suicide have a mental illness at the time of their death,” the studies revealed.

Stonewall advocates teaching LGBTQI normalcy and “safe” homosexual sex practices to the young Scots. The group called for all Scottish schools to have compulsory “LGBT-inclusive Sex and Relationship Education (SRE).”

But normalizing transgenderism only perpetuates the disorder, Heyer says.

“Individuals who identify as transgender do so largely because they are suffering from an undiagnosed disorder known as ‘comorbid disorders,’” Heyer explained. “Their condition remains untreated before, during and after ‘changing’ genders, so the social and emotional disorders remain untreated also.”

Heyer pointed out that 90 percent of attempted suicides are a result of mental illness. He cited a major study that found “at least 62.7 percent of individuals who identify as transgender are in a fact suffering psychiatric mental disorders.”

Politicians and the mainstream media only add to the problem by “glamorizing transgenders like Bruce Jenner, in his psychological turmoil,” Heyer said. They “do a great disservice to transgender people and to those who treat them by denying them a safe environment in which to tackle the deeper issues of comorbid disorders and suicide.”

And yet that “disservice” is just what the Scottish government is spending tax dollars on. This year, Scotland made sex education mandatory in all high schools and “age-appropriate” education about homosexual relationships in all elementary schools.

British Secretary of Education Justine Greening made Sex and Relationship Education (SRE) mandatory for all of England’s schools — for children as young as four to learn about “healthy relationships” — by 2019.

Pro-family advocates say that just as “reproductive rights” is a euphemism for abortion, so “Sex and Relationship Education” (SRE) has become a euphemism for gay indoctrination.

“We will need to ensure that any legislation around SRE has a strong emphasis on neglected topics such as sexual health and on LGBT relationships,” Green said, “in order to tackle high rates of STIs among young people and ongoing homophobia.”

“The government must also ensure teachers get allocated time, resource and training to do justice to this vital subject,” he said while not mentioning reading, writing, or arithmetic.

The Christian Institute (CI) warned that SRE prematurely exposes young children to homosexuality and transgenderism. CI also warns that parents’ right to opt out of sex ed could be taken away.

“Campaigners are mounting a coordinated push to ensure that the LGBT agenda is affirmed by all schools – including faith schools,” a CI statement read.

Even rabbis and priests have endorsed school programs that “actively promote the acceptance of (homosexuality) and provide … information about contraception and abortion.”

And yet unplanned teen pregnancy fell an amazing 42.6 percent when liberal sex-ed funding was cut.

“Christian, Jewish and Muslim parents have the right to see their children educated in line with their beliefs,” a CI spokesperson said, “and the government must not trample on this when it legislates for these new curriculum subjects.”

“Christians and others must push back hard against these calls, to ensure that parental rights are maintained and the innocence of children is defended.”