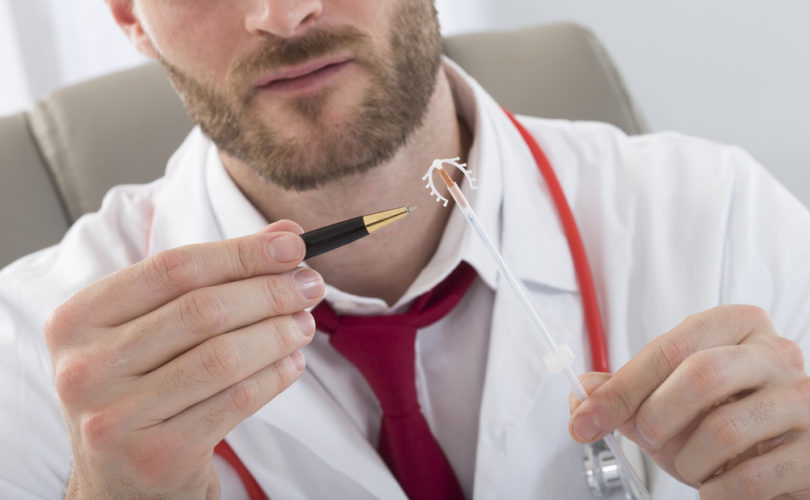 (LifeSiteNews) — A study conducted by medical professionals associated with Duke University shows that just over 96% of women who obtain IUDs (intrauterine devices) experience negative side effects, including high levels of pain and distrust of doctors.

Jenny Wu, who is completing her residency at Duke’s School of Medicine in the obstetrics and gynecology department, headed a study released in December that analyzed 100 TikTok videos of women who received an IUD.

IUDs are a form of long-term contraception that can block sperm from entering the uterus and interfere with sperm movement, decreasing the chances of fertilization. Some can also act as an abortifacient by releasing copper into the womb, killing off sperm, eggs, and fertilized embryos.

Based on 100 videos of women sharing their IUD experiences that were posted to TikTok, researchers found that 37.8% of the reactions “had a negative tone” about the contraceptive compared with the 19.4% that were generally positive.

“Of videos conveying patient experiences, all had a negative or ambiguous tone and 96.8% highlighted pain and other side effects related to IUDs.”

A summary of the findings published by Duke Health added that “the most common topic covered in patient experience videos was IUD insertion and removal, where patients often highlighted negative experiences with pain control, felt they didn’t have adequate anesthesia, and experienced side effects.”

Another article written for the university’s student newspaper pointed out that “the videos with negative tones attract the most viewership” and quoted Wu, the study’s lead researcher, as saying, “There aren’t a lot of people who talk about how great their IUD is.”

Beyond the painful insertion and removal process, IUDs pose serious health risks to women. Mirena, a major manufacturer of the contraceptive, outlines various risks on the website, ranging from mild to life-threatening.

On its website, Mirena lists pain, bleeding, and dizziness as short-term effects and missed menstrual periods and ovarian cysts as long-term health changes. “Life-threatening infection,” pelvic inflammatory disease (PID), and perforation — when the IUD gets embedded in the uterine wall — are all listed as serious health risks. Additionally, if women using IUDs become pregnant, their unborn babies face possible death from developing in ectopic or intrauterine pregnancies.

Hormonal birth control poses serious risks for women taking it as well as for babies who are never born because of prevented conception or developing within toxins designed to kill them. However, since the overturning of Roe v. Wade, birth control has become a more heated debate. A recent controversy began with the U.S. Food and Drug Administration (FDA) lessening restrictions on the abortion pill.

Earlier this month, the federal organization announced that it would allow retail pharmacies to distribute mifepristone after completing a simple approval process. Shortly after, CVS and Walgreens both announced plans to pursue certification to dispense the abortion pill in their stores across the country.