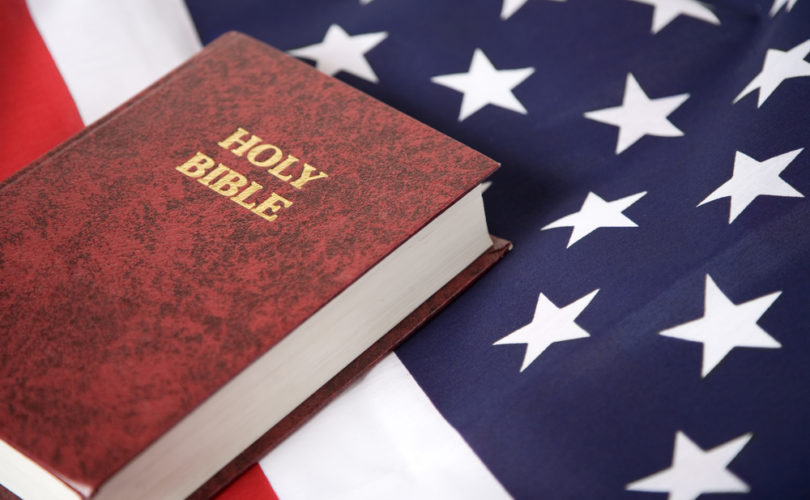 Bible laying on top of an American flag Shutterstock.com

CHINO, California, August 1, 2018 (LifeSiteNews) – A three-judge panel of the 9th Circuit Court of Appeals has forbidden prayers, proselytizing, or scripture readings at Chino Valley school board meetings, in a ruling the board’s lawyer says is broad enough to ban “anything that might resemble a prayer.”

The July 25 ruling affirms a 2016 injunction by a California district court, in a suit brought against the Chino Valley Unified School District by the Freedom from Religion Foundation (FFRF), an atheist group that seeks to eliminate most benign, voluntary, and unofficial expressions of religiosity from every level of the American public sphere.

FFRF legal director Rebecca Markert celebrated the ruling as a “solid victory for state-church separation,” a commonly-misunderstood concept that does not appear in the Constitution.

According to the Daily Bulletin, the board has opened meetings with prayers unofficially since 2010 and officially since 2013, a practice that later expanded to include mid-meeting prayers, Bible readings, and statements by board members FFRF and the 9th Circuit took to constitute proselytizing.

The group cites examples such as Board President Andrew Cruz’s practice of closing meetings with Bible readings, and Board Vice President James Na (an active member of the Calvary Chapel Chino Hills Watchman Ministry) urging “everyone who does not know Jesus Christ to go and find Him.”

In its defense, the board cited Supreme Court precedent establishing that Christian prayers were permissible at public meetings as long as the local government body didn’t compel participation or discriminate against minority faiths. But the 9th Circuit disagreed.

“The prayers frequently advanced religion in general and Christianity in particular,” the panel ruled. “The prayer policy’s purpose is predominantly religious in violation of the Establishment Clause.” The decision was unsigned, but Judges M. Margaret McKeown, Kim McLane Wardlaw, and Wiley Y. Daniel comprised the panel.

“These prayers typically take place before groups of schoolchildren whose attendance is not truly voluntary and whose relationship to school district officials, including the board, is not one of full parity,” they claimed. “Unlike a session of Congress or a state legislature, or a meeting of a town board, the Chino Valley board meetings function as extensions of the educational experience of the district’s public schools.”

Robert Tyler, an attorney who represented the district, told the Bulletin that passage was flat wrong, noting that students could opt to go to school board meetings for extra credit but weren’t required to, and city council meetings could get them the extra credit as well. He added that disciplinary hearings, where attendance isn’t voluntary, aren’t heard in the same sessions where prayer takes place, and the board’s student member is permitted to leave during prayer.

“Where does this stop?” Tyler asked, noting that the ruling applied to community members speaking during public comments as well as the board itself. “This is a very dangerous ruling.”

“This requires the board to censor or otherwise remove individuals who attempt to say a prayer, or anything that might resemble a prayer, during the public comment period,” Tyler told WND. “Such an overbroad injunction is a clear violation of the right of private citizens to address their local representatives in public meetings and is dangerous to the First Amendment.”

WND notes that outgoing Justice Anthony Kennedy, far from a conservative or originalist, nevertheless acknowledged in 2014’s Town of Greece v. Galloway that “[c]eremonial prayer is but a recognition that, since this Nation was founded and until the present day, many Americans deem that their own existence must be understood by precepts far beyond the authority of government.”

Tyler says his law firm plans to meet with the school board to discuss its next move, which could include filing for the 9th Circuit to reconsider or petitioning the Supreme Court.