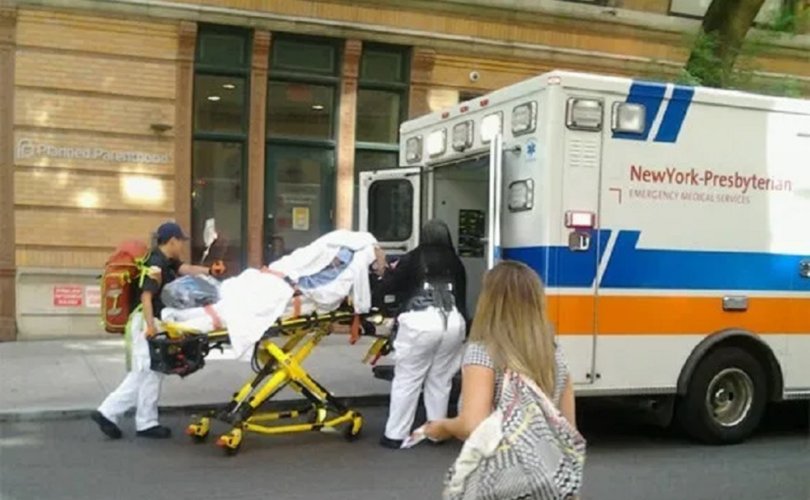 September 11, 2019 (Operation Rescue) — While pro-life activists watched and prayed, a woman was brought out of the Margaret Sanger Planned Parenthood abortion facility in Manhattan for transport to New York Presbyterian Hospital.

The ambulance arrived at the Margaret Sanger Planned Parenthood located in a high-rise on narrow Bleecker Street near Margaret Sanger Square on August 22, 2019, at 10:03 a.m. Witnesses noticed that the ambulance turned off its siren about a block from the abortion business.

The woman was wheeled out on a gurney partially covered with a sheet and was loaded into the ambulance.

The ambulance pulled away with flashing lights only, then turned on sirens when it was about a block away, as is usual for this particular Planned Parenthood abortion facility.

This is the ninth medical emergency documented at the Margaret Sanger Planned Parenthood abortion facility in the first eight months of 2019. The facility targets poor urban women of color for abortions.

“I'm sure Margaret Sanger would be proud of Planned Parenthood and her name-sake high-volume abortion facility, but we are ashamed of it. We are ashamed that New York named a city square after this racist woman, and ashamed that the State of New York has embraced Planned Parenthood's desire for abortion on demand throughout all nine months of pregnancy,” said Troy Newman, President of Operation Rescue. “Meanwhile, the mainstream media continues to gaslight the American people into thinking Planned Parenthood has the best interests of poor women of color in mind, when that is actually that is the farthest from the truth.”

Other known medical emergencies that have taken place in 2019 at the Margaret Sanger Planned Parenthood are linked below.

More information about medical emergencies at this Planned Parenthood abortion facility and others around the nation can be found at Abortion911.com.

Note: This article has been edited to remove “and abortion” to the sentence about Sanger's support for birth control as a means of eliminating people of color. Abortion was not legal in America in Sanger's time and she made statements against it. However her eugenics philosophy ultimately inspired Planned Parenthood — the organization she founded — to embrace and promote abortion.