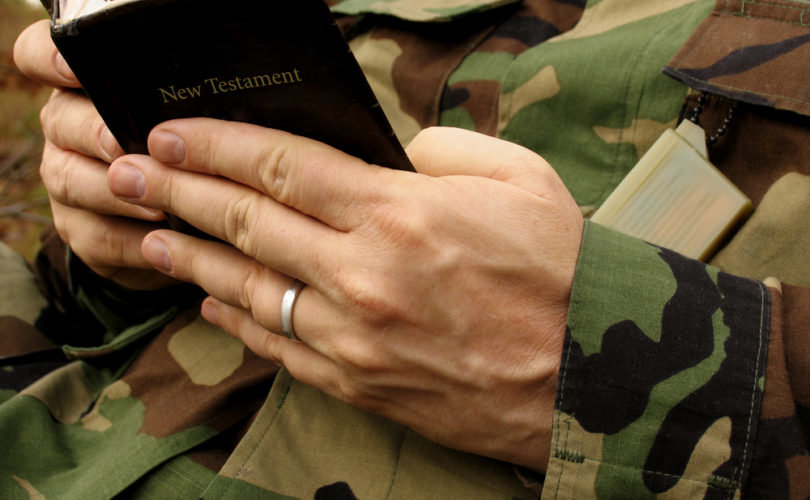 WASHINGTON, D.C., April 7, 2015 (LifeSiteNews.com) – Rep. Doug Collins, R-GA, is an Iraq veteran who simultaneously serves as a member of Congress and an Air Force Reserve chaplain. And last week, he led nearly three dozen of his colleagues in defending a highly decorated Navy chaplain facing the loss of his job and his pension because of his religious views on sexuality.

For years, Assemblies of God chaplain Lt. Commander Wes Modder has served the armed forces. His commanding officer, Captain Jon Fahs, wrote in Modder's most recent review that the chaplain was “the best of the best,” a “consummate professional leader” who deserved an early promotion.

Five months after this review, however, Fahs has said that “on multiple occasions [Modder] discriminated against students who were of different faiths and backgrounds.” Modder has been accused by subordinates and others of holding a traditional Christian view of abstinence until marriage and the immorality of homosexual relationships.

Collins told The Daily Signal that “it's First Amendment rights for a reason – not because you agree with it.”

He has written a letter with 34 of his colleagues demanding the Navy “provide information on the nature of the accusations and investigations” and “confirmation as to what steps the Navy is taking to reinforce the policies and protections in place for service members and chaplains to freely exercise their religiously-informed beliefs.”

“He’s not going to give an atheist perspective if he has a cross on his uniform,” Rep. Collins said. “That’s just not going to happen and it shouldn’t be expected to happen.”

Modder and his lawyer, Michael Berry of Liberty Institute, believe he may have been set up by a junior officer.

The assistant, a junior officer, has only been working with Modder for a few weeks. The chaplain says that he was asked repeated questions about homosexual relationships by the aide — and, according to Modder, had no idea that the assistant is in a same-sex relationship.

After receiving the letter, Modder was relieved of his duties and told to clean out his office.

“It was insulting and it was devastating,” Modder told Fox. “I felt discriminated against. How could something like this happen at this stage of my career?”

“To be clear,” Berry said, “Chaplain Modder does not dispute that during private, one-on-one pastoral care and counseling sessions, he expressed his sincerely held religious belief that: sexual acts outside of marriage are contrary to Biblical teaching; and homosexual behavior is contrary to Biblical teaching; and homosexual orientation or temptation, as distinct from conduct, is not sin.”

But even as Modder is being accused of violating military policy, Berry says it may be the assistant who is guilty of a crime. “I believe some of what the lieutenant has alleged could constitute a military crime, false statements, taking what the chaplain said and twisting or misconstruing it, in an attempt to get the chaplain punished,” he said. “He abused the position he was placed in as a chaplain’s assistant.”

The Pentagon has said it will investigate the accusations against Modder through the Navy Personnel Command. “The Navy values, and protects in policy, the rights of its service members, including chaplains, to practice according to the tenets of their faith and respects the rights of each individual to determine their own religious convictions,” the Pentagon said in a statement.

The apparent crackdown on military chaplains has concerned Congressman Collins, who in January wrote a letter in defense of Chaplain Joe Lawhorn. Lawhorn has been accused of violating military policy when he shared his Christian beliefs with a fellow service member suffering from depression.

Collins said that Modder's situation is intended to create a “chilling effect” in the military.

“They’re being told that they can’t say certain things, which are all founded within their faith tenets,” he said. “It’s been very disturbing to me.”

Collins' argument is being echoed by former Army Capt. Jason Torpy, president of the Military Association of Atheists and Freethinkers, a non-profit organization representing “atheists and humanists in the military.”

Torpy told The Daily Signal that a chaplain “shouldn’t have to advocate for somebody else’s beliefs,” though “a civil, compassionate, and professional discussion using all of the professional chaplain skills that you have” is “the reasonable expectation.”

“Nobody’s expecting them to come in and say, ‘Hey, being gay is awesome,’” says Torpy, though he also said that “it’s unreasonable for people to browbeat people or belittle them in any context.”

The Collins letter, which was provided to LifeSiteNews by the representative's office, cites both military policy and federal law in defending Modder as having acted within the limits of his job as a military chaplain. No Democrats signed the letter.

Collins, who is in his second term in Congress, previously received attention for sponsoring legislation passed by the House in October 2013 that would let military chaplains serve despite the partial federal government shutdown happening at the time.