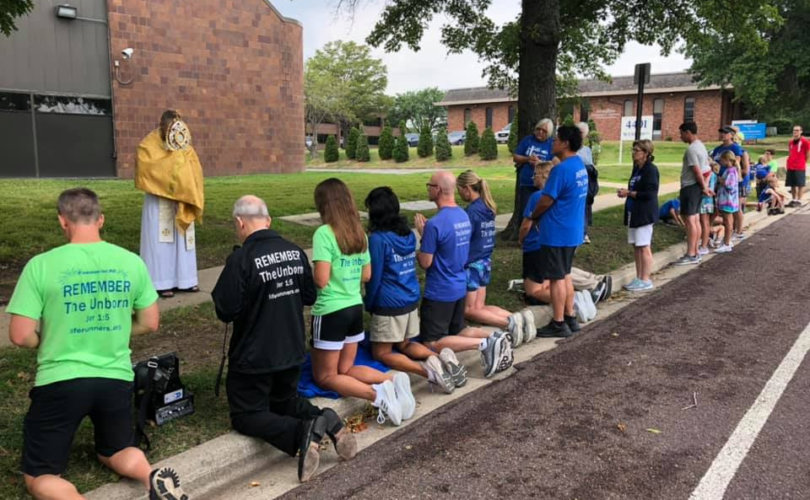 LIFE Runners pray before the Blessed Sacrament in front of a Planned Parenthood center in Overland Park, Kansas.LIFE Runners

(LifeSiteNews) — Runners and walkers gave witness to the pro-life cause and prayed for the unborn during this year’s A-Cross America Relay, running routes that literally cross America in the world’s largest-spanning pro-life event.

LIFE Runners, who are distinguished by the witness of their “Remember the Unborn” shirts, started the relay simultaneously on July 4 from four cities in the United States: the northern point of Grand Forks, North Dakota; the southern point of San Antonio, Texas; the western point of San Francisco, California; and the eastern point of New York City.

The runners and walkers altogether covered 5,359 miles in more than 40 days, with some meeting in the middle of the country in Kansas City, Missouri, at which point the completed routes formed the shape of a cross across the United States. Bishop Thomas Paprocki of Springfield, Illinois, said Mass and led Benediction of the Blessed Sacrament and deliverance prayers to end abortion along with Father Michael Voithofer before a Planned Parenthood in Overland Park, Kansas, on the final day, August 8. The group then marched into Roe Park to cross the finish line.

The event is an opportunity to declare to the world “Remember the Unborn,” the hallmark message of the LIFE Runners apostolate, inscribed on its obligatory jersey. The wearing of this message is designed as an easy way to literally save lives.

The message’s power is explained by a study of Students for Life, which found that “78% of post-abortion women said if just one person had offered support or if they viewed a supportive sign, they would have chosen life,” as Pat Castle, founder of LIFE Runners and former Air Force Lieutenant Colonel, previously shared to LifeSiteNews.

The “crowning” of the event with Benediction and deliverance prayers before the Overland Park Planned Parenthood killing center is a powerful conclusion to the relay’s mission for life. Castle  has called the Eucharist “the most powerful spiritual weapon.”

He has also pointed out that the spiritual weapon of prayer “is often enough for a mom to not turn in to that abortion facility.”

One such example of this occurred last year, when eyewitnesses testified that there were no Friday or Saturday abortion appointments at a Bellevue, Nebraska mill after Father Voithofer helped lead a prayer rally there. At the time, he made the sign of the cross over the abortion center with the Blessed Sacrament. LIFE Runners joined with his Ablaze ministry at the time for prayer, singing, and adoration, as well as the recitation of the St. Michael prayer and the litany of the saints.

Inspired by an extraordinary feat

The A-Cross America Relay was born after Castle met another faith-filled runner, Jeff Grabosky. At the time, Grabosky was completing an extraordinary and rare feat of running solo from coast to coast across the United States, praying as he ran. Only the 43rd person to complete an ocean-to-ocean run, Grabosky came to write about his four-month journey in the book Running with God Across America, in which he explains how he prayed a decade of the rosary for each of the roughly 3,500 intentions he received at the time.

Castle had already founded LIFE Runners when one of his lieutenants told him about Grabosky. The two got in touch, and Castle found that Grabosky had conveniently been forced to pause his run as he waited to receive a replacement wheel for a stroller that he pushed as he ran, in which he carried his tent, sleeping bag, and other belongings.

The two met for Mass and breakfast, and Castle offered to give Grabosky his LIFE Runners jersey if he would send him a photo of himself wearing it on one of the remaining days of the trip. According to Castle, Grabosky sent him a picture of himself by a sign that read “Castle Creek.” When Castle pointed out what he was sure was an intentional homage to his name, Grabosky said he never noticed the sign. “Coincidence? I think not,” Castle said.

The two stayed in touch, and Castle eventually came to Grabosky with an idea: “I said, ‘Jeff, what if we did this trip across America again, and could you map it, and we’ll get the hundred LIFE runners and we’ll just all do it together. And he said, ‘Absolutely,” Castle related.

For about a year and a half, they planned a coast-to-coast route, launching the inaugural A-Cross America relay on Palm Sunday 2013.

The relay “drew a lot of attention” to LIFE Runners, as Castle pointed out. “We kind of exploded.” LIFE Runner membership expanded from 170 at the end of 2011 to 1,791 members by the end of 2013 after the first A-cross America Relay had been completed.

In 2015, they decided to add a north-south route across the country to make a cross, and in 2016, they allowed people to “adopt” 5K segments while running “anywhere in the world during the relay time period.” According to Castle, the most important thing is that “people are out there with their witness: ‘Remember the Unborn.’”

This change has also allowed the “Remember the Unborn” witness to expand in creative ways. For example, In Boise, Idaho, LIFE Runners have adopted a segment by running from a local abortion facility to their pregnancy help center. On the island of Fiji, hundreds of LIFE Runners participate in an all-night walk/run to altogether adopt the state of Utah.

“It’s spurring this public witness, this pro-life activism, this unity, this synergy. That’s the awesomeness of this A-Cross America Relay for pro-life,” Castle told LifeSiteNews.

He noted that “The LIFE Runners shirt has provided the pro-life movement a jersey to unite our teamwork for ending abortion.

The LIFE Runners’ “Remember the Unborn” witness is not limited to runners but is available for everyone of every athletic level from age of .1 — “Yup, babies in onesies that say ‘Remember the Unborn,’” said Castle — to 101, “a lady in a wheelchair in a nursing home.”

“The only requirement to be a LIFE Runner is that you’re willing to wear your shirt or jacket that says ‘Remember the Unborn’ as a public witness to help end abortion,” Castle said.

All are invited to join LIFE Runners for the Indianapolis Marathon events on November 5-6, including a Kids Fun Run, 5K, half marathon, and full marathon. Alan Webb, the American record-holder in the mile, plans to speak at the LIFE Runners pre-race dinner. Find the event schedule at https://www.liferunners.org/race/2021indi/